There had been an expectation that the attendees at the recent United Nations Climate Change Conference in Copenhagen would turn the fire hoses on our burning world. But the chill of the Danish winter must have cooled any desires for definitive action, and delegates opted instead for the more conventional compromise of prevarication and procrastination. Although acknowledging the need to “turn down the heat”, the world was asked to await the outcome of yet another global talkfest. 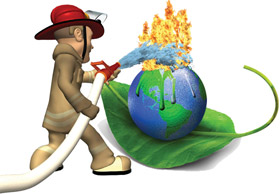 Among the delegates was Prime Minister Rudd, supported by a phalanx of bureaucrats, political advisors and activists. Despite Rudd’s grand plan for climate change, the conference’s political outcomes of indecision and inertia should come as no surprise.

Closer to home, morale in our public hospital system has also been simmering, occasionally reaching a flashpoint, while chafing against poor integration of services, inadequate investment, workforce shortages and ineffective governance. Moreover, we have witnessed report after report drawing attention to widespread scrub fires alight across our whole health care system.

In such a pressure-cooker environment, the universal understanding and expectation has been that those public officials charged with the duty of ministering to this ailing state of affairs would duly prime the pumps and douse the flames of discontent.

But no! Despite the anticipation of the government’s long-awaited response to the wide-ranging recommendations of the National Health and Hospitals Reform Commission, the Council of Australian Governments (COAG) has decided to sit tight and wait. Any forlorn hope that the winds of change would herald an activist agenda has died. Perhaps even more disturbing was the deafening silence of organised medicine in response to the antics of the recent COAG meeting.

In the meantime, small scrub fires will continue to break through the containment lines erected by dedicated and overstretched health care workers toiling on the frontline. The situation is desperate, and it is destined to continue as long as our elected officials continue to fiddle while the health care system burns.