Time to commit to working in respectful partnerships with Indigenous people

On 12 March 2010, the Australian Indigenous Doctors’ Association (AIDA) launched a health impact assessment of the Australian Government’s Northern Territory Emergency Response to protect Aboriginal children. The report of the assessment was developed by AIDA in collaboration with the Centre for Health Equity Training, Research and Evaluation at the University of New South Wales, and with support and financial assistance from the Fred Hollows Foundation.

During 2006 and 2007, there was much discussion in the media about child sexual assault in Northern Territory Aboriginal communities. In April 2007, the report of the NT Board of Inquiry into the Protection of Aboriginal Children from Sexual Abuse, entitled Ampe akelyernemane meke mekarle “Little children are sacred”, was presented to the Chief Minister of the NT Government; it was released to the public in June 2007. The report addressed concerns about child sexual abuse and made recommendations that child abuse and child sexual abuse be designated as issues of urgent national significance by both the Australian and NT governments.1

On 21 June 2007, the then Minister for Families, Community Services and Indigenous Affairs, Mal Brough MP, announced, on behalf of the Australian Government, the Northern Territory Emergency Response (NTER) to protect Aboriginal children in the NT.2 The announcement included, among other measures, alcohol restrictions, welfare reform, compulsory income management, compulsory health checks, banning of pornography, scrapping of the permit system for common areas, and improving housing and community living arrangements. Significantly, legislation was passed by the Australian Parliament suspending Part II of the Racial Discrimination Act 1975 (Cwlth), so that the government’s measures could be imposed in prescribed Aboriginal communities in the NT.3 Part II of the Act prohibits racial discrimination in rights to equality before the law; access to places and facilities, land, housing and other accommodation; and provision of goods and services.

The introduction of the NTER and, in particular, the lack of community consultation, was a cause for deep concern. In response, AIDA chose to undertake a health impact assessment to give voice to affected communities and, as doctors, to facilitate discussion with policymakers and program leaders on ways to improve the NTER and reduce negative impacts on health and wellbeing.

The health impact assessment uses methods endorsed by the World Health Organization.4 It is a predictive tool to assess the potential health impacts of a proposed policy, program or project on the health of a population, and it makes practical recommendations to improve the proposal. It is not an evaluation; rather, by seeking to predict the impacts on the health of affected populations, it has the potential to inform decision making before a proposal is implemented and before negative effects occur. Qualitative and quantitative methods are used to predict the health impact of a given policy on selected health parameters.

The health impact assessment of the NTER is underpinned by the Aboriginal understanding of health and wellbeing. It refers to The dance of life model developed by Professor Helen Milroy, Director of the Centre for Aboriginal Medical and Dental Health at the University of Western Australia.5 This model represents an Aboriginal interpretation of health and illustrates health in its five dimensions — cultural, spiritual, social, emotional and physical — within which are a number of layers reflecting historical, traditional and contemporary influences on health. These five dimensions were examined within the health impact assessment framework.5

Evidence for potential impacts was collected in three ways: (a) consultation with four communities; (b) consultation with other stakeholders; and (c) the commissioning of expert appraisal reports. We considered seven components of the NTER: external leadership, governance and control; compulsory income management; alcohol restrictions; prohibited materials; housing; education; and child health checks.

The first component, “external leadership, governance and control” was not included explicitly in the conceptualisation of the NTER or in legislation establishing the intervention. However, the evidence gathered from communities, experts and key stakeholders pointed to the need to assess the health impact of the processes and structures of external leadership, governance and control imposed by governments and their agents in introducing and implementing the intervention.

In preparing our report, we spoke to more than 250 people affected by the intervention measures. Grandmothers spoke about the humiliation of going “back to the old days” when all decisions were made for them. Mothers spoke about the added burden of trying to buy family groceries using the BasicsCard,6 which can only be used in specified locations. Communities spoke about their hurt when their successful local programs were disregarded by the government. And men everywhere spoke about their despair at being labelled as paedophiles.

Bearing in mind the Aboriginal definition of health outlined above, the health impact assessment predicts that the intended health outcomes of the NTER — improved health and wellbeing and, ultimately, longer life expectancy — are unlikely to be fully achieved. The health impact assessment findings speak for themselves and show that the intervention does more harm than good. The report’s disturbing prediction — that the intervention will cause profound long-term damage to our Indigenous communities — should be of concern to all Australians, including medical practitioners.

The main findings of the report are that:

The Box summarises and rates the potential health impacts of the NTER measures, and outlines the recommendations of the health impact assessment (HIA) report.5

With great generosity of spirit, communities spoke about their willingness to work with governments to show them how to get things right. However, the longer a centralist-style of intervention continues, the more the creeping mistrust of governments will become entrenched. Governments need to act, and they need to act now, before the predictions in this report become a reality. Generally speaking, governments need to think about the ways they can work together with Indigenous people, but, more immediately, AIDA believes that the Racial Discrimination Act must be reinstated and compulsory income management must be overturned.

The health impact assessment of the NTER can be viewed online at http://www.aida.org.au/hia.aspx. 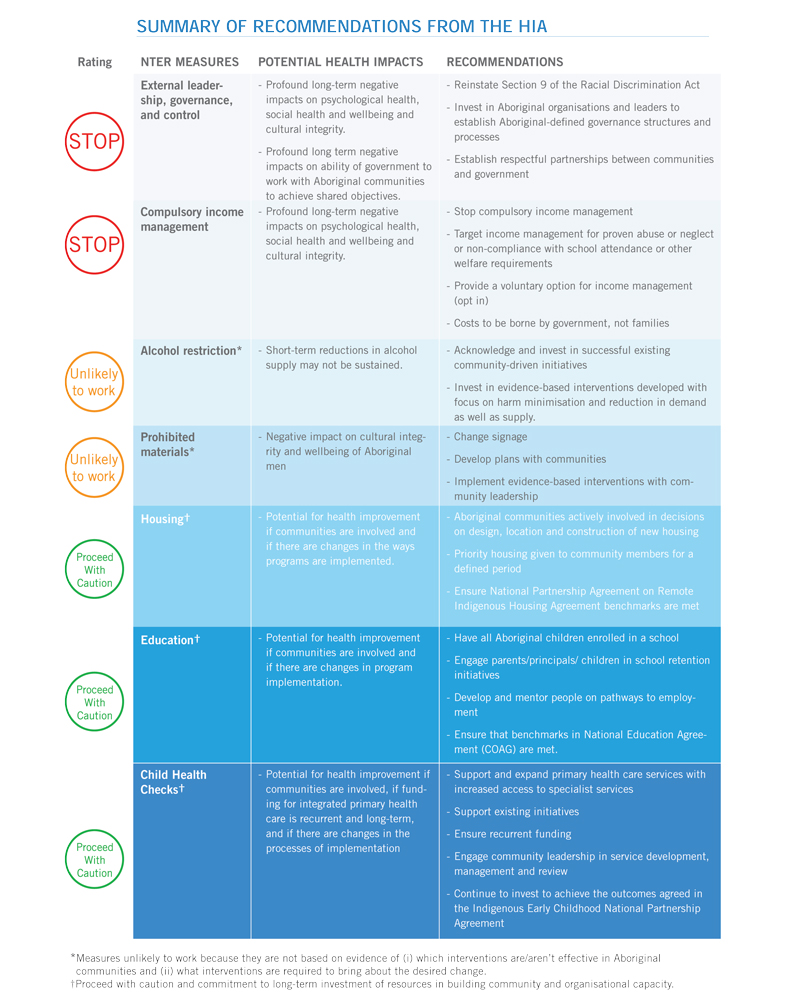 AIDA would like to acknowledge the Health Impact Assessment Steering Committee, the Centre for Health Equity Training, Research and Evaluation at the University of New South Wales, the Fred Hollows Foundation, Professor Helen Milroy, and our community partners, key stakeholder interviewees and expert reviewers for their contribution to the report.