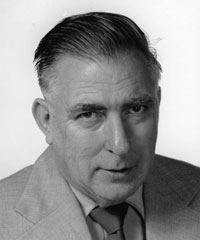 Joffre Bartholomew Cowle was born in Sydney on 28 June 1931. He was educated at Waverley College and the University of Sydney, graduating in medicine in 1956.

While still an undergraduate, Joffre had spent 2 years in the university’s Department of Pharmacology under Professor Roland Thorp studying the mode of action of cardiac glycosides. Their research, showing that cortisone increased the rate of polymerisation of skeletal actin but had no effect on cardiac actin, was published in the journal Nature,1 and Joffre was awarded a Bachelor of Science in Medicine with first class honours.

After a 2-year residency at the Mater Misericordiae Hospital in Sydney (1956–1957), Joffre spent some time at the Peter MacCallum Cancer Centre in Melbourne and also worked as a Flying Doctor. In 1959, newly married to Colette, a casualty nurse, he went to the United Kingdom, where he worked at the Glasgow Eye Infirmary and later at the Cambridge Regional Hospital. From 1960 to 1961, he held the position of Assistant Professor of Pharmacology at the University of Ottawa in Canada, where he was involved in the pharmacology teaching program for medical students. He obtained a Diploma in Ophthalmology in 1961.

Returning to Australia in 1962, Joffre worked at Hornsby District Hospital and the Medical Eye Service of New South Wales, specialising in glaucoma, and then at the Department of Ophthalmology and Eye Health of the University of Sydney. He also did experimental and clinical ophthalmology work in conjunction with the Department of Veterinary Medicine. While working in clinical practice, he continued to do research, and was involved in developing neutral pilocarpine eye drops.

Joffre held a number of prestigious positions and awards. He was a Foundation Fellow of the Royal Australian College of Ophthalmologists, established in 1970. In 1980, he set up and became Director of the Research Establishment of Engineering; Biology and Medical Sciences in Sydney. In 1989, he was made a member of the Instituto Barraquer in Barcelona, Spain, a world renowned ophthalmological centre. He was also a Knight of the Military and Hospitaller Order of St Lazarus of Jerusalem and became President of the NSW Commandery.

One of Joffre’s great loves was music. He played the Hawaiian steel guitar and built his own recording studio. With his wife and seven children, who played numerous instruments, he performed on radio and television.

Although suffering from diabetes, Joffre continued to do research until his death from a heart attack on 21 May 2009. He is survived by Colette, his six sons (who work in various fields of engineering) and his daughter (a musician).