“The moment is all we have”: patients and visitors reflect on a staff Christmas choir

Objective: To examine how performances by the Staff Christmas Choir of the Peter MacCallum Cancer Centre (“Peter Mac”) affected inpatients, outpatients and visitors in 2008.

Design, setting and participants: During the Christmas season 2008, the Peter Mac Staff Christmas Choir gave seven performances at the Centre. Locations included inpatient wards, outpatient waiting areas and a cafeteria. To assess their response to the choir, oncology inpatients, outpatients and visitors (including early-departing bystanders) were given anonymous, semi-structured questionnaires during and after performances. To analyse the responses, we used a constructivist research approach informed by grounded theory.

Main outcome measures: Participants’ descriptions of the choir’s effects on them.

Results: Questionnaires were returned by 111 people. The performances were received favourably by 93.7% of respondents, including nine from Jewish, Hindu or atheist backgrounds. Many said the music aroused positive emotions and memories. Several described transformative thoughts and physical reactions, felt affirmed by the Christmas spirit or message, and/or appreciated the peaceful or enlivened and social atmosphere. The choir also elicited personal perspectives about Christmas and Judaism, and the importance of “enjoying the moment”. Only three respondents (2.7%) reported adverse effects, relating to emotional and audible intrusiveness.

Conclusions: The Staff Christmas Choir created a supportive and uplifting atmosphere for many oncology patients and their visitors. However, responses from people from non-Christian backgrounds were limited, and further investigation is warranted to extend our understanding of the effect of Christmas music in Australian public health settings.

For thousands of years, music has significantly enhanced health, character and behaviour.1,2 Music was prescribed to treat disorders in ancient Egypt and Greece, and throughout the Middle Ages, Renaissance and Baroque periods.1 Shamanic cultures still use music as part of rituals for maintaining health and supporting the dying and bereaved.2,3

Supported by Florence Nightingale, concerts were performed in London hospitals from 1891 and, by 1925, 15 New York hospitals had adopted the practice.4 After World War I, music therapy — a profession that tailors music techniques to individualised needs — emerged.5

In the present day, and closer to home, Melbourne Symphony Orchestra members have performed at the Royal Children’s Hospital,6 and tertiary music students regularly perform at St Vincent’s Hospital, Melbourne. Choirs in Melbourne and other parts of Australia often perform in hospitals at Christmas.

The Peter MacCallum Cancer Centre (“Peter Mac”) in Melbourne is a public hospital with 94 inpatient beds, outpatient clinics and an outpatient radiotherapy service. Its Staff Christmas Choir has performed annually since 1956. Given the increasing emphasis on addressing supportive care needs in oncology,7,8 we decided to conduct a small research study on the effects of the staff choir on inpatients, outpatients and visitors during the Christmas period in 2008.

All hospital employees and volunteers are eligible to join the choir. Weekly rehearsals commence around October. Just before Christmas, the choir performs in four inpatient wards, two outpatient waiting areas, and the staff cafeteria (Box 1, Box 2).

There were seven performances in 2008, averaging 40 minutes in duration and involving an average of 20 singers and six instrumentalists. The program consisted of 12 items — 10 Christian carols and two songs with Christmas themes, including “The first nowell” (English), “O little one sweet” (German) and “Christmas comes” (Polish).

Posters advertised the performances and volunteers encouraged patients and visitors to attend. Listeners were invited to sing along and play percussion instruments in some songs.

Data were collected at the time of the performances or within 24 hours afterwards. Patients and visitors who heard a performance were invited to fill out anonymous, semi-structured questionnaires that elicited brief demographic information and their personal responses to the choir. One researcher also made notes on observed reactions of the audience.

Sealed questionnaire returns boxes were placed in outpatient areas. Within 24 hours of a performance, one of the researchers (C C O) returned to inpatient wards with a sealed returns box and offered to transcribe responses for those who couldn’t write.

We used a constructivist (qualitative) research approach (wherein the knowledge gained from interviews with participants is compared and systematically condensed by the researcher), reflecting our belief that people’s interpretations of the world differ according to their backgrounds.10 The design, informed by grounded theory (an inductive approach in which theory is developed from the data, rather than proposing hypotheses and gathering data to test them), was selected because it allows phenomena to be explained through analysing participants’ and researchers’ interpretations.9,11

Qualitative inter-rater reliability13 was assessed: two authors (C J H and E J P) analysed the data and C C O’s original interpretations. Further alterations were made until all researchers agreed with the interpretation of the findings.

One hundred and eleven questionnaires were returned. At least 47% of inpatients responded. The response rate among outpatients and visitors was impossible to calculate, as scores of people moved through the listening areas during performances.

Respondents’ demographic features are summarised in Box 3. Nearly all patients and visitors (104/111 [94%]) expressed positive responses. Observed reactions were mostly favourable, occasionally negligible, and rarely negative. Two people (one visitor and one outpatient) commented about the music’s loudness. Many observers moved towards the choir, while others ignored it. Some sang along, played instruments and joked with the conductor. A few cried with heads bowed.

Many respondents reported feeling energised, uplifted, calmed or at peace. Individual patients said that the choir’s music created a “Christmas spirit”, helped them feel “fitted for heaven”, and “transcended religious boundaries”. Many visitors welcomed the choir’s diversional, personal and social effects, even if they aroused sad memories. The following is a sample of responses relating to this theme:

Made me happy not depressed. Think life is worth it. I’m in tears. (Patient)

Choir lifts my spirits and makes me more determined to get better quickly so that I can be home for Christmas. (Patient)

An atmosphere of hope. An annual good memory of life. (Patient)

Joy and sad together. (Patient)

I felt so happy and full of cheer. I am from a different ethnic background (Hindu) and this was my first experience and I just loved it! (Patient)

Wonderful way of blunting the terrible news we just received . . . transported for a few minutes and felt the Xmas spirit. (Visitor)

Sadness having lost my husband a few months ago . . . while at the same time a feeling of life going on and forward. (Visitor)

It gave me peace and happiness. Brings me back to life. (Visitor)

Many listeners were transported by the choir to remembered or imagined places, such as Christmas scenes from their childhood. Memories were variously good, comforting, welcome, nostalgic, happy or sad. Four respondents who described sad memories all said they were accompanied by positive experiences.

Put my memories in a good place in my childhood. (Patient)

Firstly it made me cry as it reminded me of when I was younger . . . Then I was glad that I was actually here to be able to have that enjoyment again. (Patient)

The music created a bond between strangers. People from non-Christian backgrounds responded positively and did not express offence about the Christian carols. Two respondents born in communist countries were delighted by the choir’s expressive freedom. Some were uplifted by how the choir brought people together.

Being a Jew I was singing Christmas carols . . . I am very proud . . . we Jews give the world Christianity. (Patient)

Brings us all together from all walks of life . . . when many are facing adversity. (Patient)

. . . even in the midst of gloom. Just enjoyed the moment, which is all we have. (Visitor)

Four inpatients (3.6%) reported neutral responses, and three outpatients (2.7%) complained that the music was confronting or loud. The religious backgrounds of these respondents were Christian, unstated or “none”. One respondent commented:

I am only just managing my emotions . . . an emotional overload. (Patient)

Responses were influenced by the choir’s positive attributes, staff identities and the international nature of the carols (which was regarded favourably). Many respondents were grateful and complimentary, although some said that the choir was too loud or too soft.

Staff responses relating to our study will be reported elsewhere.

To our knowledge, this article presents the first research into the appropriateness of religious or cultural practices in an Australian health care space. Our findings indicate an overwhelmingly favourable response to the staff choir from oncology patients and visitors, regardless of whether they were from Christian or non-Christian backgrounds. Their enjoyment, in an environment characterised frequently by “blunt silence”, “gloom” and “struggle” (words quoted from respondents), was striking. While duration of effect was not examined, being able to “enjoy the moment” was regarded as paramount, especially when dealing with uncertainty shrouding cancer treatment or end-of-life care. Even though three respondents found the music emotionally confronting or too loud, two of them recommended that the choir continue for the benefit of others. A staff choir will not appeal to everyone.

The choir’s positive effects on respondents’ emotions, memories and images were comparable with music therapy’s effects in oncology.14 However, adverse experiences of oncology patients to music therapy have not been reported, possibly because music therapists work in therapeutic relationships with willing participants.15 Music alters mood through an extensive network of activated neural regions and connections involving pleasure, arousal, opioid transmission and dopamine production.16 Memory traces of previously heard music and experienced emotions are also involved.16 Witnessing the choir’s “happy” and “warm” performances (words quoted from respondents) may have also triggered mirror neurones.17

Respondents’ sad memories were accompanied by positive feelings. Through offering multiple messages in non-referential ways, music can expand listeners’ ways of thinking and feeling.18 Music’s power is reflected in its capacity to arouse paradoxical states, acknowledging our fears and grief alongside our thanksgiving and hope.19

Limitations of our study were its small size, small proportion of non-Christian respondents, and restriction to a single institution. We examined responses from oncology patients and visitors who heard the choir, were aware of the questionnaire, and were motivated and able to participate. Thus the survey was open to responder bias, the direction of which is unknown.

Christmas is a Christian celebration that is observed in Australia with public holidays. Christmas music (live and recorded) is played in many health care settings at this time. There has been debate in some sectors in Australia about appropriate observation of religious holidays, and religious spaces in some public hospitals are being converted to multi-faith worship areas in acknowledgement of different religious practices.

In summary, the Christmas choir music was welcomed by many at Peter Mac and should be encouraged for supporting oncology patients and their visitors in similar facilities. In the words of a January 2009 article in The Age, “Music binds strangers simply because it does not speak to one person. It is the universal become personal”.20 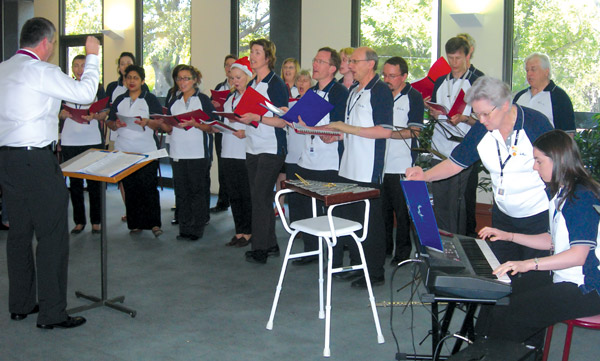 2 Choir performance to patients, visitors and staff in an outpatient area 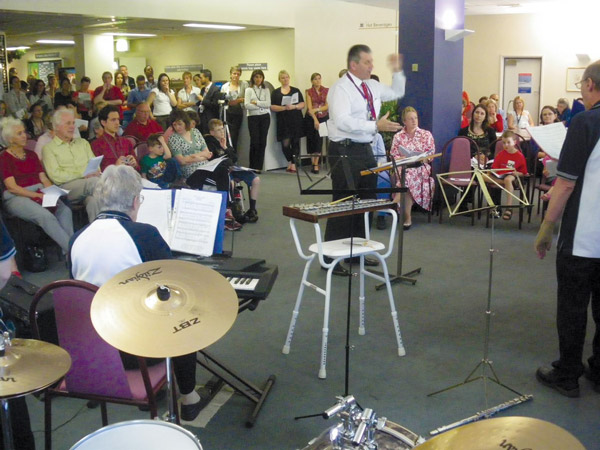 Clare O’Callaghan was supported by a National Health and Medical Research Council postdoctoral fellowship in palliative care. Philips Medical Systems provided pens. Our research was otherwise unfunded. We pay tribute to Jean Milne, Radiation Therapist at Peter Mac, who founded and then conducted the Peter Mac Staff Christmas Choir from 1955 to 1979. Colin Hornby has been the conductor from 1980 to the present.