A 49-year-old health care worker received varicella vaccine in accordance with current Australian guidelines. She developed streptococcal toxic shock syndrome, complicated by acute atraumatic dislocation of the right wrist secondary to poststreptococcal reactive arthritis — to our knowledge, the first report of spontaneous wrist dislocation as a complication in this condition. Vaccination was accompanied by prolonged viraemia with the varicella vaccine strain — also, we believe, the first report of this in an immunocompetent patient.

A 49-year-old female hospital employee received varicella vaccination, in accordance with the guidelines of New South Wales Health for varicella-seronegative health care workers.1 She presented 17 days after the second vaccine dose (38 days after the first dose) with a 12-day history of joint pain and swelling, predominantly affecting the upper limbs and knees, along with myalgia and lethargy. These symptoms had worsened over the preceding 48 hours. There were no noticeable skin lesions, and no local reaction at the vaccination site.

The patient’s past medical history was unremarkable except for depression treated with venlafaxine, the only medication she was taking at the time of admission.

At presentation, she was afebrile, with a blood pressure of 95/60 mmHg, and pulse rate of 96 beats/min. The dominant clinical finding was gross peripheral oedema of the upper limbs, including the hands (Box 1).

Forty-eight hours after admission, the patient became confused and hypotensive, with a systolic blood pressure of 70 mmHg. Streptococcus pyogenes was isolated from blood cultures. Her blood pressure did not increase in response to intravenous resuscitation with normal saline (1 L) and colloid (2 L). She was transferred to the intensive care unit, where she received inotropic support with noradrenaline for 22 hours.

The patient was treated with high-dose intravenous benzylpenicillin (1.8 g 4-hourly) for 10 days and aciclovir (10 mg/kg 8-hourly) for 7 days.

Ten days after admission, serum albumin levels had risen to more than 30 g/L. Although the peripheral oedema resolved gradually, both wrists and the left knee remained swollen. The patient had no fever and no clinical features of septic arthritis. Ultrasound examination of the joints and a technetium-labelled bone scan did not suggest joint fluid or adjacent osteomyelitis.

Nineteen days after admission, the patient showed signs of bilateral median nerve compression. The right wrist appeared clinically deformed, with palpable synovitis (Box 2A ). Imaging showed disruption of the right wrist and carpus to a degree usually associated with high-energy trauma (in the absence of any history of trauma), with dislocation of the distal radioulnar joint (DRUJ), and wide diastasis of the scapholunate interval (Box 2B). The left wrist and carpus showed lesser disruption.

The following day, the patient underwent aspiration of the left knee effusion, and bilateral carpal tunnel decompression and flexor synovectomy. Extensive synovitis was observed around the flexor tendons of both wrists (Box 2C), with rupture of the right lunotriquetral ligament. The right DRUJ was reduced and held in a supination splint, avoiding the insertion of metalware until infection had been excluded.

Fluid from the knee contained 85 000 polymorphonuclear cells/mL, but no organisms were seen. Fluid and synovial tissue from the right wrist and left knee showed no bacterial growth on culture, and were negative for VZV by quantitative PCR (although the patient had received no antimicrobials in the 21 days before surgery). Histological examination of synovial tissue showed an acute and chronic inflammatory cell response and granulation tissue-type reaction, consistent with poststreptococcal reactive arthritis. The patient was negative for HLA-B27 antigen.

The supination splint did not adequately control the right DRUJ. K-wiring of the joint was required, with subsequent fusion of the wrist joint and stabilisation with a tendon graft. Symptoms were initially treated with non-steroidal anti-inflammatory drugs, with the later addition of systemic corticosteroids.

Quantitative varicella PCR was performed weekly for 4 weeks. A decrease in varicella DNA concentration in serum from 480 000 to 3400 copies/mL was shown 5 days after admission to hospital. Levels stabilised at 9600 ± 2100 copies/mL, and had decreased to 800 copies/mL before discharge. The Oka vaccine strain of VZV was still detectable by quantitative PCR in the blood 54 days after vaccination, but had become undetectable just over 2 months after vaccination.

The timeline of events is outlined in Box 3.

This is the first report, to our knowledge, of prolonged viraemia after varicella vaccination in an immunocompetent patient, and also of spontaneous wrist dislocation as a complication of poststreptococcal reactive arthritis.

Varicella vaccine contains live attenuated virus (Oka/Merck strains), and has been used in Australia since 2000.3 Although the Oka vaccine strain has been detected in patients with varicella or zoster-like rashes after VZV vaccination,4 its persistence and load in blood after vaccination of immunocompetent adults has not been established. In a study of primary varicella infection, wild-type virus was not detected more than 8 days after the onset of rash, nor in any patient who received aciclovir.5 Another study was unable to detect virus more than 14 days after onset of illness.6 In contrast, in our patient, viraemia persisted for 54 days and the Oka VZV strain was detectable after aciclovir treatment.

S. pyogenes infection has long been recognised as a sequelae of chickenpox.7-9 A study found that up to 50% of cases of invasive group A streptococcal infections in children were associated with recent VZV infection.7 However, in previous cases, varicella infection was clearly apparent, and skin lesions were present from which secondary bacterial infection was presumed to arise. Our patient had no clinically apparent chickenpox-like skin lesions, and, in her case, the association between the varicella vaccination and streptococcal infection cannot be clearly defined.

The frequency of poststreptococcal reactive arthritis complicating streptococcal septicaemia is difficult to determine because of the heterogeneity of the condition and lack of well accepted diagnostic criteria.10 Although palmar flexor tenosynovitis is described,11 acute atraumatic wrist dislocation has not been documented previously as a complication of poststreptococcal reactive arthritis. Occasional reports of atraumatic dislocation of the wrist have been in the setting of a pre-existing connective tissue disorder or had unknown aetiology.12,13

The M11 serotype of S. pyogenes isolated from our patient has been reported previously in invasive streptococcal disease, although M1 and M3 are the most commonly isolated serotypes.8 However, we believe this is the first report of the M11 serotype as a cause of poststreptococcal reactive arthritis,14 possibly reflecting a more virulent strain.

This case highlights the possibility of prolonged high-level viraemia following varicella vaccination and the possible association with invasive S. pyogenes disease. However, this must be considered in the context of the benefits of varicella vaccination in preventing transmission of disease to health care workers15 and susceptible individuals.

1 Gross oedema of the patient’s hands at presentation 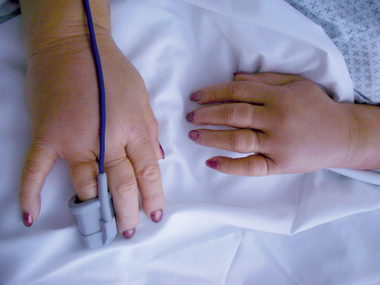 2 The patient’s wrist 19 days after admission

A: Clinical deformity of right wrist. B: Posteroanterior and lateral x-rays showed carpal disruption, dislocation of the distal radioulnar joint and wide diastasis of the scapholunate interval. C: At surgery, synovitis was apparent around the flexor tendons.