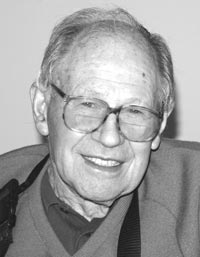 Paul Large was born in Beira, Mozambique, on 12 August 1920 and brought up in Durban, South Africa. He was educated at Michaelhouse, in rural Natal, and enrolled at Guy’s Hospital Medical School, London, in 1938.

During the war, many Guy’s Hospital patients, staff and students were evacuated to Kent and Sussex because of the German bombing. Paul and other students were strained by decentralisation, by Home Guard and air raid precaution duties, and by a disjointed curriculum.

After graduating in 1943, Paul joined the South African Air Force, but returned to Guy’s in 1946. He distinguished himself as a teacher and qualified for Fellowship of the Royal College of Surgeons (London) in 1948 and a Master of Surgery in 1952.

Paul returned to Durban in 1953 to work in private surgical practice. He also did honorary work at McCord Hospital and Durban’s fledgling medical school. Both of these institutions catered for people of dark skin. Educating underprivileged South African students of Bantu and Indian origin was in keeping with his compassionate philosophy of life.

In 1958, disillusioned with the political situation in South Africa at the time, Paul migrated to Melbourne, Australia, where he built up a solid private and hospital practice. A staff surgeon for many years at the Western General Hospital, he taught many medical students and junior doctors and always showed deep concern for his patients.

In 1966, 1969 and 1972, Paul served (as leader) with civilian Australian surgical teams in battle areas in rural South Vietnam. With guerrilla war in progress, much of the surgery dealt with battle trauma.

Although dedicated to his profession, Paul’s family and home life were all-important to him. He was erudite, civilised, inquisitive, charming, humorous, kind and selfless. He had a passion for history and a love of the English language. His electoral choices were shaped by the personal qualities of candidates, rather than political parties, and his disgust at exploitation of the weak.

He retained a boyhood enthusiasm for dinghy sailing, and was involved in building, racing and administration. He also followed international rugby, retaining a keen interest even as he became more infirm.

Paul’s final years were of gentle physical decline until death from an embolic blockage of a coronary artery on 24 October 2008. He is survived by his wife Susan and children Peter, Susanna, Richard, Catherine and Jonathan.