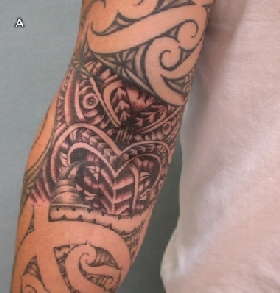 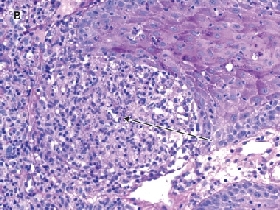 A 32-year-old Maori man presented with a 2-week history of worsening erythema, oedema and pain in parts of the recently acquired Maori tribal-style tattoos on his right arm and right lower leg. He developed a skin reaction, predominantly over the right cubital fossa, right thigh and calf. The reaction was unusual for such tattooing. Over a 2-month period he had had serial extensive tattooing to his thigh and arm at a Sydney parlour. The tattoos were all by the same artist, using the same pattern and ink colour.

The patient was systemically well and had not experienced any fever. There was no history of immunocompromise and he was not taking any regular medication. When the lesions had first appeared, some 3 weeks after the tattoos had been done, he had presented to his general practitioner, who had treated him empirically with cephalexin, doxycycline and topical hydrocortisone 1%. When there was no improvement, he was referred for a dermatological opinion.

On examination, the patient was exquisitely sensitive to light touch in the tattooed areas of the right cubital fossa, right upper thigh and calf. Erythema, oedema and violaceous nodules were present, but there was no ulceration or abscess formation and there were no palpable cords. Pulses were detectable, and there was no associated lymphadenopathy or nodular lymphangitis (Figure A).

A skin biopsy from the forearm was sent for histopathology and culture (including deep fungi and mycobacteria). Histopathological examination showed an inflammatory infiltrate, most marked in the upper dermis, and poorly formed granulomas (Figure B). Mycobacterium chelonae was grown from the specimen cultures and was identified by both high-performance liquid chromatography and line probe assay at the reference laboratory at Westmead Hospital. Susceptibility testing by the agar disk diffusion technique (used to test rapidly growing mycobacteria such as M. chelonae and M. fortuitum1) showed susceptibility to clarithromycin; intermediate susceptibility to moxifloxacin, tobramycin and azithromycin; and complete resistance to all other agents, including minocycline, rifampicin, cotrimoxazole, imipenem, ciprofloxacin, cefoxitin and amikacin.

Given the clinical context, our patient was assessed for associated comorbidities predisposing to an atypical mycobacterial infection. Serology testing for HIV, hepatitis B and hepatitis C was negative; blood sugar levels were normal; and a chest x-ray proved unremarkable.

Because of the extensive skin surface area involved (about 10% of the body surface area), surgical excision was inappropriate and systemic antimicrobial therapy was warranted. As the organism was resistant to most antimicrobials, dual therapy with clarithromycin 500 mg twice daily and moxifloxacin 400 mg daily was commenced. The clarithromycin dose was increased to 1 g twice daily over a 4-week period.

Antimicrobial therapy was continued for 4 months, resulting in significant clinical improvement. On clinical review, there was some residual nodularity and scarring but no evidence of recurrence of the infection. A repeat skin biopsy demonstrated no mycobacterial growth.

Inspection of the tattoo parlour sourced the M. chelonae to a tattoo ink bottle that had been mixed using an industrial bolt that was left in situ. The same ink bottle had been used on multiple clients over a 2-month period. We are aware of three other clients who had similar reactions, including the index patient’s father. The tattoo parlour was referred on to the public health authorities. Fearing retribution, the patient did not wish to provide sufficient details to the public health unit for further investigation.

Mycobacterium chelonae is a rapidly growing, non-tuberculous mycobacterium, classified as one of the Runyon group IV mycobacteria. A ubiquitous saprophyte in the environment, it has been found in soil, water, sewage and dust particles.2,3 In humans, the organism is an uncommon cause of localised cutaneous lesions (eg, associated with surgical wounds or acupuncture) and also disseminated disease.4,5 Often the source is contamination from colonised tap water, although there have been reports of contaminated tissue-marking agents used in surgery.6,7

Tattooing carries with it several medical risks, including transmission of infectious disease due to organisms such as hepatitis B virus, HIV, Treponema pallidum, papillomavirus, and typical or atypical mycobacteria.9,10 There have been case reports of cutaneous M. tuberculosis infection following inoculation by tattooing,11 but, to our knowledge, M. chelonae infection associated with tattooing has not been previously reported.

In purely cutaneous disease, M. chelonae is introduced by trauma to the skin.12 The organism can also cause various clinical syndromes, including isolated lymphadenitis, osteomyelitis, joint infections, ocular disease and pulmonary disease. Lesions characteristically commence as red-to-violaceous subcutaneous nodules that may be painful and sometimes progress to cellulitis, abscesses or ulcers. Regional lymphadenopathy may be present,3 but constitutional symptoms are typically absent.7 Disseminated disease, usually originating from primary skin and soft tissue lesions, occurs almost exclusively in immunocompromised patients, such as those having solid organ transplants.13,14

Interestingly, in the case described here, the infection was only cutaneous and the patient was otherwise well. However, the case highlights the need to consider the possibility of systemic disease. Although there are no set guidelines for M. chelonae work-up, management of our patient warranted investigation for infectious diseases cotransmitted with tattooing as well as a chest x-ray to rule out pulmonary involvement.15

Treatment for M. chelonae infection is challenging, as the organism is resistant or only partially susceptible to many antibiotics. Based on sensitivities, and to avoid the emergence of resistance, dual treatment with clarithromycin and another antibiotic is recommended. Resistance to monotherapy with clarithromycin has been reported.8 Therapy often needs to be continued for several months, which can be difficult in terms of patient compliance.12

Because of the extensive skin surface area involved in this case, surgical excision of the affected skin was not appropriate. However, surgery may be a management option in cases in which there is abscess formation or in which drug therapy is difficult. Removal of any foreign bodies, such as iatrogenically introduced devices (eg, catheters, breast implants) is essential for management.15

Although cutaneous mycobacterial infections are uncommon, a high degree of suspicion is warranted when investigating skin lesions that do not respond to standard antimicrobial therapy. When assessing a patient with a tattoo reaction, M. chelonae infection should be considered in the differential diagnosis.

We would like to thank Associate Professor Steven Kossard of the Skin and Cancer Foundation Australia for reviewing the histology of this case and Dr Hong Foo of Westmead Hospital for her input on reviewing the mycobacterial testing.