Changes in synapse density in the supragranular levels (layer III) of the human dorsolateral prefrontal cortex (DLPC) during development were first reported in 1979.1 The study found that synapse density reaches a peak before adolescence, then decreases by at least 30% during the adolescent years, and remains constant thereafter until later in life (> 70 years).1

More recently, studies using antibodies to synaptic vesicle-associated proteins have confirmed this synapse loss during adolescence. They have also shown that the number of synapses in the DLPC is greatly reduced in patients with schizophrenia, beyond the 30% loss that normally occurs during adolescence; no such enhanced loss occurs in the visual cortex of such patients.2,3 The mechanisms underpinning this synapse loss is of great interest, particularly as decreasing connectivity below a certain value in the neural networks of the brain is expected to lead to rapid loss of function.4

Here, I examine what molecular events might occur at synapses in the DLPC that are involved in their formation and regression, using our knowledge of the neuromuscular synapse as a paradigm.

Molecular determinants of synapse formation and regression
At the neuromuscular junction

Over the past 30 years, a number of molecules have been identified that are central to the process of synapse formation and regression at the neuromuscular junction (Box 1). These include muscle-specific kinase (MuSK), agrin, the dystroglycan–utrophin–dystrophin complex (of which dysbindin 1 is a component) and neuregulin (NRG), together with other molecules of interest such as DISC1 (disrupted in schizophrenia 1) and neurexin (Box 2). I examine the role at the neuromuscular junction of each of these in turn and consider their normal function at synapses in the DLPC, together with what might have gone wrong with such functions in schizophrenia. An excessive loss of synapses as a result of loss of function of these molecules is known, on theoretical grounds, to lead to a failure of neural network function, and may then contribute to what has gone awry in schizophrenia.

MuSK, the principal molecule involved in neuromuscular synaptic development, has recently been found in neurones throughout the cortex. MuSK and agrin are found in about 30% of all excitatory synapses on neurones in the brain.13

It is therefore of great interest that, in agrin-deficient mice, dysregulation of components of the MuSK pathway occurs and there is about a 30% loss of synapses.13 Unfortunately, it is not known when this loss occurs in relation to adolescence. However, as conditional inactivation of MuSK in adult animals leads to loss of neuromuscular synapses, it would be anticipated that in agrin-deficient mice, up to 30% of excitatory cortical synapses would not form at all. If such results apply to humans, it would be expected that during childhood about 30% of excitatory synapses would fail to form, which is the percentage missing in the DLPC of adults with schizophrenia.

DTNBP1 (dystrobrevin-binding protein 1; dysbindin 1) is found in the cortex in association with microtubules and postsynaptic densities of spines at certain synapses, as well as in glutamatergic nerve terminals in association with the protein synaptin, which primes synaptic vesicles for exocytosis. Overexpression of DTNBP1 leads to enhanced glutamate release at synapses, whereas underexpression does the opposite,14 possibly reflecting the influence of DTNBP1 on synaptin’s control of vesicle priming.

NRG1 is localised in cortical neurones and their synaptic terminals on spines, like it is in motor neurones and their terminals at synapses on muscle cells. Preventing NRG1–ErbB4 signalling via ErbB4 RNA interference destabilises AMPA receptors and leads to loss of synaptic NMDA currents and decrease in spine size. The eventual loss of synaptic NMDA currents from mature neurones is about 50%.15 It is clear that NRG1–ErbB4 dysfunction during development will lead to a significant loss of excitatory synapse formation in the DLPC during childhood.

DISC1 immunoreactivity is found at synapses of dendritic spines in human prefrontal and parietal cortex. DISC1 is localised to mitochondria in cortical neurones, and its complex with FEZ1 (fasciculation and elongation protein zeta 1) is necessary for transport of these mitochondria from soma to axon and dendrites. Without this transport, the neurones do not form neurites.16 The implications of this for synapse formation are likely to be considerable, but are still unclear.

Neurexin is found in nerve terminals with α-neurexin and binds to postsynaptic neuroligin to ensure synaptic terminal growth. There is a 20% loss of neuropile in α-neurexin knockout mice, which is primarily due to loss of inhibitory type II synapses.17 A lack of neurexin would thus be expected to lead to significant failure of inhibitory synapse formation in the DLPC during childhood.

No study has yet reported changes in the expression of MuSK or agrin in the cortices of patients with schizophrenia. Given the importance of these molecules, it is clearly of interest to determine if such changes occur in these individuals.

In patients with schizophrenia, DTNBP1 messenger RNA (mRNA) is significantly decreased in supragranular layers II and III and infragranular layers V and VI, but not granular layer IV; no differences in mRNA for a variety of other proteins (spinophilin, synaptophysin, cyclophilin) have been detected in any DLPC layer.18 Loss of DTNBP1 results in a considerable decrease in glutamate release from synapses.14 It is therefore likely that DTNBP1 reduction in patients with schizophrenia leads to a loss in the efficacy of excitatory synaptic transmission in at least the DLPC.

NRG1a is significantly decreased in the DLPC grey matter of patients with schizophrenia, although NRG1b may be increased.19 A loss of the NRG1–ErbB4 interaction could lead to failure of excitatory synapse formation of up to 50%.15

The Scottish study that led to the discovery of DISC1 involved a translocation that removes interaction between NDEL1 (nuclear disruption element-like 1; also known as NUDEL) and DISC1.20 Indeed, single nucleotide polymorphisms in the DISC1 gene associated with schizophrenia give rise to reduced grey matter volume in the prefrontal cortex,21 possibly due to the loss of synaptic dendritic spines, and of entire basilar and apical dendrites.

When neuromuscular synapses form during development, a phalanx of molecules is orchestrated in the process, including MuSK, agrin, NRG and ErbB4. It is argued that competition between nerve terminals during the subsequent period of synapse regression involves competition for these molecules. It is highly likely that these molecules are also important in synapse formation in the DLPC during childhood, and perhaps in synapse regression during adolescence. Further, we have seen that if these molecules are not expressed, about 30% of synapses fail to form at all in the cortex. This being the case, it is expected that a failure of many synapses to form during childhood, rather than an excess loss of synapses during adolescence, might characterise schizophrenia.

Different clinical stages have been identified during the prodromal period for schizophrenia.22 Are these related to synapse loss in the DLPC? It is difficult to see how this could be the case if the relatively small number of synapses in the DLPC arises from a failure of synapses to form during childhood. On the other hand, such a relationship might arise as a consequence of the vulnerability of an already small number of synapses to further regress when such prodromal individuals are subjected to psychological stress, or stress due to infection. This could lead to a loss of synapses below the level at which DLPC networks can function.

This article is an attempt to focus attention on the possibility that our knowledge of synapse formation and regression at the neuromuscular junction, and its molecular requirements, can be used to guide us in understanding these phenomena in the DLPC. The major questions posed here are open to experimental determination:

2 Spatial distribution of molecules implicated in synapse formation and regression 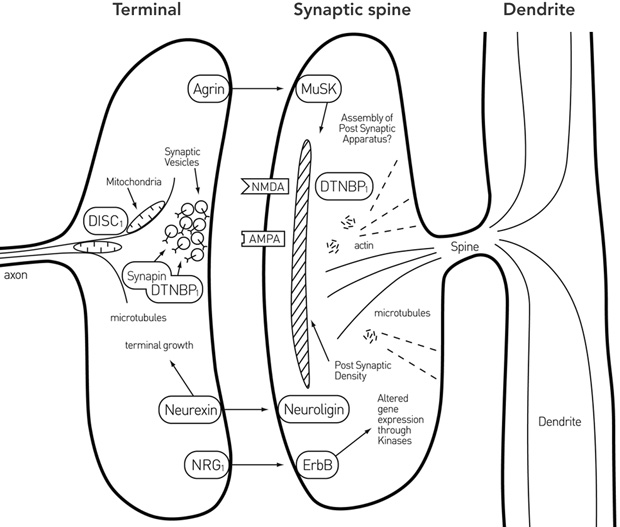