A 51-year-old man with no known history of asbestos exposure presented with hydropneumothorax. Soluble mesothelin-related protein testing and combined positron emission tomography and computed tomography were used to diagnose malignant pleural mesothelioma. One year after radical surgery and radiotherapy, there was no clinical recurrence.

A 51-year-old man who was born in South Africa presented with shortness of breath on exertion, increasing lethargy and a dry cough. He had never smoked. Medical history included nephritis at the age of 6 years, sinus drainage 20 years earlier, and psoriasis. He had no history of occupational or non-occupational exposure to asbestos, and had not lived near asbestos mines while in South Africa. He had not performed home renovations or building work in South Africa or Australia. After 12 months of national service in the South African Army, he worked in a plastics business in South Africa, selling perspex and acrylic products; he reported no involvement in plastics manufacturing. Since moving to Australia in 1995, he had worked in sales.

A chest radiograph showed a 50% right-sided hydropneumothorax, which was confirmed by computed tomography. The pleural effusion was drained, and analysis revealed a lymphocytic exudate with no cytological evidence of malignancy. Thoracoscopic pleurodesis was undertaken, and multiple biopsy specimens were collected. These were analysed by a pathologist with special expertise in lung pathology, who reported proliferating mesothelial cells with no evidence of infiltration, probably a reactive phenomenon. The patient was discharged with a presumptive diagnosis of a reactive effusion.

The patient remained well on follow-up. His lung function improved and, despite dyspnoea during exercise, he walked 20 km per week. Serial chest radiographs showed significant pleural thickening but no other abnormality. However, as the cause of the pleural effusion remained undiagnosed, the serum soluble mesothelin-related protein (SMRP) level was measured. At 2.8 nM, it was higher than the reference range (< 2.5 nM),1 suggesting malignant pleural mesothelioma (MPM). The biopsy specimens collected at presentation were reviewed, but no evidence of malignancy was found. A combined positron emission tomography/computed tomography (PET/CT) scan revealed intense tracer uptake (Box, A), suggesting MPM involving the pleura at the right lower lobe and apex, with minimal uptake in the paratracheal and subcarinal lymph nodes. Results of all other investigations (eg, full blood count, liver function tests, and measurement of creatinine and blood glucose levels) were normal.

Treatment options were carefully discussed with the patient, including the absence of level 1 evidence-based data that additional surgery would prolong his survival. He elected to undergo additional surgery with an extrapleural pneumonectomy if the diagnosis of MPM was confirmed. Thoracotomy and examination of frozen sections confirmed MPM, and a radical right pleuropneumonectomy was performed. After surgery, the patient underwent adjuvant radiotherapy of the chest wall and drain sites.

The patient recovered well and returned to part-time work. Some residual neuropathic pain arising from the thoracotomy scar was controlled with medication. One year after surgery, a repeat PET/CT scan showed no residual tumour or uptake of tracer in the lymph nodes (Box, B), and the SMRP level was within the reference range. He remained well 19 months after surgery.

Until recently, MPM was a relatively rare disease, with an incidence of 1–2 cases per million per year in the general population. However, its incidence is increasing, and Australia now has the highest reported incidence in the world.2,3 The increasing incidence is explained by high asbestos use from the 1940s to the 1980s and the long latency period of this tumour.3,4 In Australia, about 90% of men with MPM have a history of occupational asbestos exposure.2 Patients usually present with pleural effusion and breathlessness, but symptoms are non-specific in many cases — particularly in the early stages of disease.

MPM is difficult to diagnose in its early stages and, to date, no treatments have been shown to increase life expectancy. However, several new drugs have recently become available, and trials evaluating whether early treatment (including surgery combined with radiotherapy and chemotherapy) improves survival are underway. Ideally, early detection would allow intervention to control or eradicate the neoplasm. There is also considerable interest in the use of biomarkers to facilitate early detection of several malignancies, including MPM. SMRP is increasingly being used to detect MPM after clinical presentation5,6 and has recently been approved in the United States for diagnosis and monitoring of MPM.

Our patient highlights several issues in the investigation and management of pleural effusions. First, hydropneumothorax is uncommon in middle-aged men, and malignancy should always be suspected. In addition, MPM may not always be related to asbestos exposure, hence should be considered even in its absence. Lastly, modern methods of cancer detection — including SMRP testing and PET/CT scanning — may enable early detection of MPM and improve survival.

Hydropneumothorax is a consequence of a persistent pneumothorax, but is rare as a presenting feature of malignancy, particularly MPM. A literature search (using MEDLINE) for spontaneous hydropneumothorax in MPM identified few case reports in English. Most reported cases of hydropneumothorax were secondary to Boerhaave syndrome (full thickness rupture of the oesophageal wall, classically due to excessive food or alcohol consumption) or granulomatous diseases such as tuberculosis and sarcoidosis.

Pleural effusions are commonly seen in clinical practice. However, despite advances in cytological techniques and application of Light’s criteria for distinguishing between exudative and transudative pleural effusions,7 diagnosis of pleural malignancy is often delayed. Closed needle biopsy is seldom used in Australia, as its sensitivity in malignant pleural effusions (particularly MPM) is low. For patients with a negative result on cytological analysis of pleural fluid, a repeat closed needle biopsy returns a positive result in only 7%8 and could seed tumour along the biopsy track. To improve sensitivity, the pleural biopsy specimen needs to be large, hence video-assisted thoracoscopic surgery (VATS) and open pleural biopsies are now the procedures of choice in suspected MPM. They also have the advantage of enabling concurrent pleurodesis. With large tissue samples, open biopsy has a sensitivity of 97% and specificity of 56% for identifying epithelial MPM.9 VATS is associated with some risks, but overall these are low. The overall incidence of postoperative complications is 10.9%, including prolonged air leak (6.7%) and recurrent pleural effusion (0.7%).10 Early pleurodesis has been shown to significantly improve quality of life in patients with MPM, and is currently recommended in the British Thoracic Society’s guidelines on the management of malignant mesothelioma.11

Mesothelin is a 40 kDa protein that is important in cell adhesion. It is a differentiation antigen, and is present on normal mesothelial cells of the pleura, peritoneum and pericardium.5 SMRPs are thought to be either cleaved peptide fragments of mesothelin, or abnormal variants of mesothelin that are unable to bind to membranes and are overexpressed in several human tumours, including MPM.

Several studies have examined SMRP testing for diagnosis and monitoring of MPM.5,6,12 A recent study showed that blood SMRP level had a specificity of 95% and sensitivity of 83% in identifying patients with MPM.6 However, an elevated SMRP level can also occur in metastatic disease, especially ovarian cancer, pancreatic cancer and adenocarcinomas, and its use for screening in the absence of symptoms is unproven.12

PET/CT scanning is a new technique that has been shown to be useful in patients with MPM for predicting survival and evaluating response to chemotherapy.13,14 However, few data are available on its use as a diagnostic tool. In 28 patients with suspected MPM, PET/CT imaging was compared with VATS and surgical biopsies. Fluorodeoxyglucose-PET imaging was sensitive (91%) and highly specific for malignancy (100%), although the activity of some epithelial MPMs was close to the threshold of abnormality.15

MPM may not have been suspected in our patient without SMRP testing. His relatively young age and excellent fitness allowed him to opt for radical surgery and radiotherapy, which, although not proven in controlled studies, offered him hope of long-term survival. Further follow-up is needed to confirm the outcome. Improving survival in MPM is currently being evaluated in an international collaborative controlled study, the Mesothelioma and Radical Surgery trial, which includes a trial centre at St Vincent’s Hospital in Sydney. New biomarkers such as SMRP and techniques such as PET/CT may enable selection of patients for surgery in the early stages of disease and offer hope of cure in MPM. 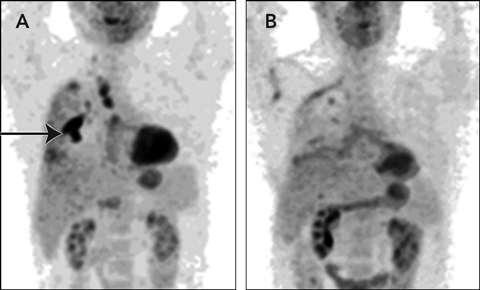 Deborah Yates has received several research grants from the Dust Diseases Board Research Grants Scheme in the area of asbestos-related disease.