The search for justice 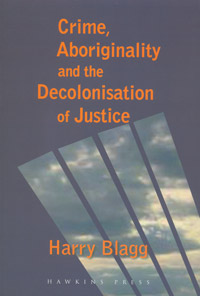 Widely published, Harry Blagg is one of Australia’s eminent researchers on criminal justice in Aboriginal communities. His Crime, Aboriginality and the decolonisation of justice is both confronting and thought provoking. Every page had me thinking that people who work in the health sector should read this book. There are such parallels. While Blagg does not specifically write about health, I became more and more aware of the dynamic interaction between justice and health — ill health and crime.

Blagg demonstrates a profound failure in the systems of justice in Australia for Aboriginal people, and this systemic failure is also applicable to health. There is much to learn. For example, much of the money in the justice system is spent at the rear end, within corrections, where funding is often channelled into preventive measures — prevention attended to too late.

When Blagg writes about prison as a source of pain but not shame, with terms of reference that are different from those prescribed by white society, he is illustrating a great tragedy. He says prison becomes a place for acquiring some of the bounties of white society: food, medical services, education, meeting classificatory kin, conducting family business, taking a break and drying out. He acknowledges the cost to Aboriginal families and communities. However, Blagg does not point out that prison has another, deeply disturbing outcome. It is where extreme violence is learnt, and where sexually violent behaviours can be transferred back into communities.

Blagg refutes allegations that Aboriginal customary laws condone violence against women and children, pointing to the wealth of research to the contrary. He suggests these laws contain considerable potential for renewal and healing.

At $49.95, the cost is a little more than I would have anticipated for a book of just over 200 pages. Nonetheless, it is good value for money. It has me thinking of links between law and health and the need to explore rather than ignore liminal spaces between Aboriginal notions of ceremony as forms of transition, including syncretic changes in status relationships between social domains — social domains that construct justice and health, or crime and ill health.