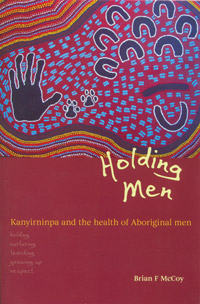 The health of Aboriginal men is a critical issue in the discourse on Aboriginal affairs and policy. The important issues here, though, the author suggests, are not merely the biomedical aspects of health. They are the relational, social and cultural contexts and constructs of Aboriginal men’s health.

The cultural process of “nurture” or “Kanyirninpa” (holding) is part of such a construct.

Brian McCoy brings an interesting perspective as he is a Jesuit priest and an academic researcher, and has been everything from a footy coach to an Aboriginal Deaths in Custody research officer. He has spent most of the past 40 years working and living with Aboriginal people, particularly in the Western Desert where much of this book was researched.

The author addresses one of the salient issues missing in the discussion on the poor health of Aboriginal men: an approach that acknowledges the relevance of culture and accurately reflects the current health status of Aboriginal men within a broader social sphere.

He begins with a relatively dry academic style that becomes quite poignant as the nature of his research is developed. He locates his personal frame of reference, builds on his own relationships with Aboriginal people, then examines the past and recent, relevant history of the Western Desert. From there the book delves deeper, into the nature of Aboriginal male relationships and how these have been affected and what the impact has been, in terms of broad health and social and emotional wellbeing.

For those of us who work with Aboriginal people, this is an important book, and for those who don’t, and want to have a deeper intellectual understanding of Aboriginal issues, it’s a good read.