Ian was born on 5 July 1926 at Port Vila, New Hebrides (now Vanuatu). The family returned to Australia in his early childhood.

After service in the Royal Australian Air Force, Ian graduated in medicine from the University of Melbourne in 1953. Three years later, he returned to the New Hebrides as Mission Doctor on the island of Tanna. During his years in Tanna, Ian observed at close hand the infamous “cargo cult”. A rather dramatised account of his part in stopping the intrusion of cult members into his hospital was written by David Attenborough in his book The quest for paradise. 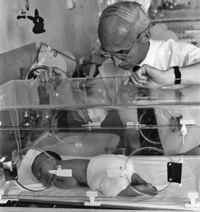 In 1959, Ian went to Papua New Guinea (PNG) to work as a Medical Officer at the Port Moresby General Hospital. He became Foundation Dean of the Papuan Medical College, where he lectured from 1961 to 1969. In 1968, he was awarded a World Health Organization travelling fellowship in paediatric surgery, which took him to Philadelphia Children’s Hospital and other children’s hospitals throughout the United States. During his time in Philadelphia, he worked with “Chick” (C Everett) Koop, one of the first surgeons to successfully separate Siamese twins.

On his return from PNG to Australia, Ian worked at the Royal Children’s Hospital, Melbourne, from 1970 to 1971. The following year, he became a James Fairfax Surgical Research Fellow at the Children’s Medical Research Foundation and a Consultant Surgeon at the Royal Alexandra Hospital for Children, Sydney. The award of a Sir Denis Browne Memorial Travelling Fellowship in Paediatric Surgery in 1975 took him to Great Ormond Street Hospital for Children, London, and to other hospitals in the United Kingdom and Ireland.

In 1980, Ian was invited to take up a lectureship at the newly established Medical School at the University of Newcastle (New South Wales), where he would help plan the surgical contribution to the paediatric curriculum. In Newcastle he was involved with neonatal work and with children requiring particularly difficult surgical procedures. He also helped to establish neonatal paediatric surgery at the Newcastle Mater Misericordiae Hospital and had the distinction of performing the first neonatal operation at the John Hunter Hospital.

Ian’s gentle sense of humour, matched by his courage, invariably won the day. In the somewhat stormy days during the establishment of the Medical School in Newcastle, he quietly retired from the academic arena, citing his reason as “preferring to deal with premature babies than immature professors”.

After retirement, he helped in a voluntary capacity with the Hunter Orthopaedic School and the Tingira Centre for blind and deaf children.