Born on 8 March 1921 in Melbourne, Ken was educated at St Thomas’ Grammar School and Scotch College and studied medicine at the University of Melbourne, graduating in 1943. 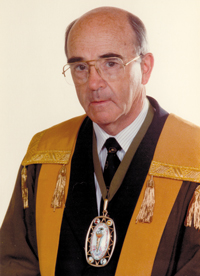 In 1947, after gaining a Diploma of Ophthalmology, Ken was appointed Resident Medical Superintendent at the Eye and Ear Hospital in Melbourne. With his appointment, a new era opened for the old Hospital. These were the days when a group of three — the Medical Superintendent, Matron and Manager — ran a public hospital. They were responsible to a semi-autonomous board of management and worked on a shoestring budget. The commander-in-chief was usually the Medical Superintendent, occasionally the Matron, but never the Manager. Ken was very much in charge, and no function of the Hospital was too remote to escape his attention. A small man, dressed informally (sometimes even in overalls), with prominent eyebrows and a penetrating gaze, he was the first contact every new resident doctor had with the Hospital. He was clearly a man of enormous energy and organising ability, dedicated to the revival of the old Hospital and looking for people to help him do it.

Ken was a man of few words who loathed pretence and humbug. In the early days, he made it his business to work in the clinics of the Hospital — both the Eye Clinic and the Ear, Nose and Throat Clinic — in order to see proceedings at first hand and to assess the calibre of doctors-in-training. In the inevitable committee work, he did not always side with the majority view, but his formidable intellect, combined with the most thorough preparation, usually ensured that his view prevailed. Over about 20 years, the Hospital was rebuilt and thoroughly modernised, thanks to generous bequests from Peter Howson, Smorgans and others.

But Ken’s real obsession was education — postgraduate and undergraduate, medical and nursing. He was pivotal in the establishment of the chairs of Ophthalmology and Otolaryngology at the University of Melbourne, and set up the William Gibson lectures for undergraduates on Saturday mornings, starring Dr John Colvin. Meanwhile, in cooperation with the general hospitals, the steady work of training specialists in both disciplines for fellowships of the Royal Colleges went on. Special clinics, such as those for glaucoma; retinal detachment; orbit, plastic and lacrimal; deafness investigation; and the bionic ear, sprang up and greatly enlivened proceedings. He helped found the Royal Australian College of Ophthalmologists in 1969 and became its President in 1981–82.

Ken retired to the Victorian seaside town of Inverloch in 1990 and immersed himself in local affairs and computer activities until his death on 24 May 2008 from mesenteric artery thrombosis. His wife Betty survives him, together with his two sons David and Robert, who are also in the medical profession.