In 1919, he was enrolled as a boarder at Cranbrook School in Sydney, where he excelled in several sports, including rugby, rowing and cross-country running. 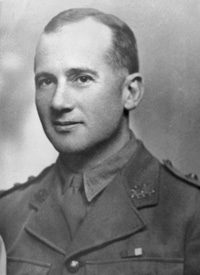 Encouraged by his father to study medicine, David enrolled at the University of Sydney in 1926 and graduated in 1932. In the same year, following the family tradition of breeding livestock, he purchased his first Hereford cows, which he ran with his brother Louis’s poll stud at Cudgewa in the upper Murray region.

David left for England in 1934 to work as a Resident Medical Officer in London, returning in 1937 to work in general practice at Canowindra, in central NSW.

He enlisted in 1940 and became a member of the 2/5th Australian General Hospital. The following year, he was imprisoned in Salonika, Greece, in the infamous Dulag 183, a German transit camp for prisoners of war (POWs). In 1942, he was sent to Obermansfeld, a POW camp near Frankfurt in Germany, to care for seriously injured POWs. He became the ear, nose and throat (ENT) surgeon there.

In the book Escape to live, by Wing Commander Edward Howell, David received special praise: “Our doctors were a young and lively gang . . . Outstanding among them was David Leake . . . He was one of those rare doctors whose interest in their patients is more than professional. He was a philosopher and friend to them as well”.

The day David arrived back in Australia in 1945, he married Phyllis Byrne, whom he had met before the war. After training in ENT surgery at Royal Prince Alfred Hospital in Sydney, he moved to Tamworth in 1947. He was probably the first ENT specialist practising in “the bush”. In 1949, he purchased “Bahreenah”, on Goonoo Goonoo Creek near Tamworth, and established what is now the oldest Poll Hereford stud in family ownership.

David didn’t suffer fools gladly, and was respected for his “bloody-mindedness”, determination, self-reliance, resilience, dedication to the task in hand, and skill at improvisation — characteristics forged during his time as a POW. On one occasion when a bronchoscopic forcep was not available, he made one from no. 8 fencing wire! But in spite of his “no nonsense” exterior, he was dedicated to and loved by his patients and staff for his care and compassion, attending emergencies at all hours.

David retired reluctantly at the age of 80, mumbling that he’d been “given the sack”. He was awarded the Medal of the Order of Australia in 1994 for services to surgery and Poll Hereford breeding.

David died peacefully in a nursing home on 30 June 2006. His wife Phyllis had predeceased him in 1990. He is survived by his daughter Jane, who continues to breed Poll Herefords.

A loyal friend and colleague, David is affectionately remembered for his dedication, idiosyncracies and marvellous uniqueness.