Albert (“Bert”) Bencsik was born on 15 October 1931, the only child of Hungarian immigrants recently arrived in Australia. The family lived in Rose Bay, and Bert attended Woollahra primary school and Sydney Technical High School, where he was a prefect. 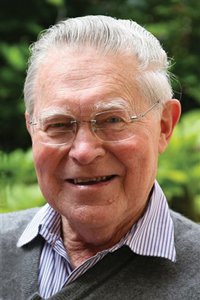 After graduating from the University of Sydney in 1956, Bert did his residency at the Mater Misericordiae Hospital, Crows Nest. In 1960, he travelled as a ship’s surgeon to the United Kingdom, where he worked in Portsmouth, London and Edinburgh and became a Fellow of the Royal College of Surgeons of Edinburgh in 1964. Returning to Sydney after completing his Fellowship, he worked as a Surgical Registrar at St George Hospital from 1964 until 1966. During this time, he was a founding member of the Resident Medical Officers Association and an Honorary Medical Officer for the Australian Racing Drivers Club.

In 1967, Bert joined the Australian orthopaedic training scheme, and in 1970 commenced private orthopaedic practice in Chatswood and Kogarah, and later also in Canterbury and Bankstown. He was an Honorary Medical Officer, subsequently Visiting Medical Officer, at St George and Canterbury hospitals. He developed a special interest in hand surgery and was secretary of the New South Wales Hand Surgery Association. Together with Bill Cumming, almost 40 years ago, he founded the St George Hospital hand clinic, which gradually developed into a first-class trauma unit. He was strongly involved in the St George Hospital Orthopaedic Skills Laboratory, which was the first and largest fully equipped such facility in the world.

Bert was a careful, unhurried, caring clinician whose demeanour instilled great confidence in his patients. After retiring from elective surgery in 1997, he continued to consult, particularly in medicolegal matters.

In his leisure time, Bert was an avid gardener who designed and cultivated a beautiful garden at his home, “Ysabel”, in Hunters Hill. He was a lover and connoisseur of fine wines and food, and delighted in attending meetings of the Tipplers Wine Club, of which he was a founding member. He also had more than 70 letters, on a wide range of subjects, published in the Sydney Morning Herald from 1964 to 2007.

Bert died on 26 June 2008 of acute renal failure and prostate carcinoma. He is survived by his children Michael, Susan, Catherine and Nicholas, and seven grandchildren, to whom he was devoted.