A 14-year-old boy was admitted with a 2-week history of increasing breathlessness and fatigue. He had a pulse rate of 130 beats/min and blood pressure of 100/66 mmHg with 16 mm paradox. Jugular venous pressure was raised 10 cm above the sternal angle, and heart sounds were faint. He had been diagnosed with refractory iron-deficiency anaemia in early childhood, for which he had been receiving blood transfusions. He denied any history of epistaxis, haemoptysis, malaena, haematuria or overt bleeding from any other site.

On examination, the patient had multiple, blue-black, papular and nodular, compressible, non-pulsatile, vascular skin lesions, ranging in size from a few millimetres to 1–2 cm, distributed over the trunk and limbs, including the soles of the feet, perineal region (Figure A) and lips. A chest x-ray showed an enlarged cardiac silhouette suggestive of pericardial effusion (Figure B). This was confirmed by transthoracic echocardiography. Therapeutic pericardiocentesis showed haemopericardium.

Blue rubber bleb naevus syndrome (Bean syndrome) is diagnosed in the presence of distinctive venous malformations on the skin, in the gastrointestinal tract and, less often, in other organs, leading to occult or overt gastrointestinal bleeding and chronic anaemia.1-3 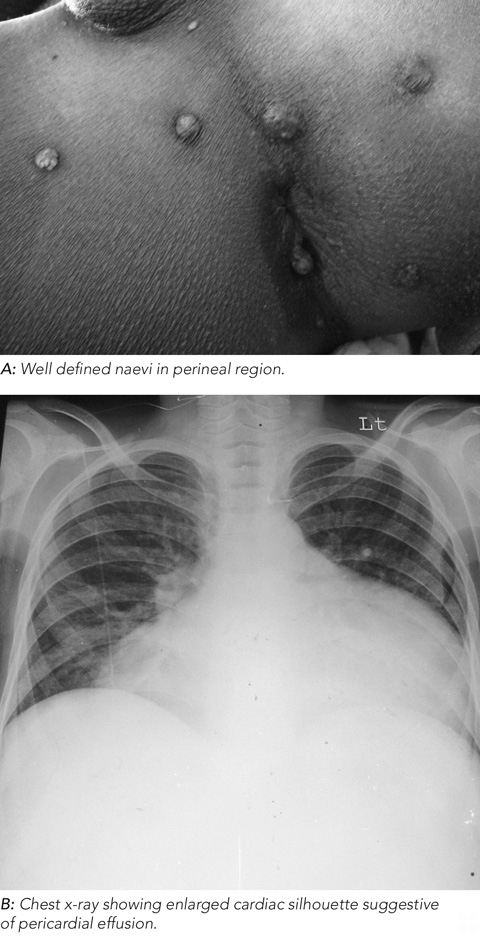