We report the case of a 59-year-old severely obese man with coexisting type 2 diabetes, hypertension and dyslipidaemia who was treated with a very-low-calorie diet (VLCD) program for 12 months. He continued to lose weight during the treatment, with marked improvement in his comorbidities and no adverse effects. This case demonstrates that prolonged use of a VLCD under close medical supervision is safe and effective in certain obese patients.

A 59-year-old severely obese man was admitted to hospital with a 3-day history of gradually progressive paraesthesia and mild weakness affecting all four limbs, with a background of polydipsia, polyuria and fatigue over the previous 4 months.

On examination, his weight was 169.5 kg and his height was 1.90 m (body mass index [BMI], 47.0 kg/m2). He was hypertensive (167/80 mmHg) and afebrile. He had mild weakness in a pyramidal pattern in the legs. Upper and lower limb reflexes were brisk, ankle jerks were absent, plantar responses were upgoing bilaterally, and sensation was reduced in a stocking distribution. The cranial nerves and speech were unaffected and visual fields were normal. Cardiovascular, respiratory and abdominal examinations were unremarkable. The presence of acanthosis nigricans and a fungal toenail infection were noted.

Neurological findings remained stable during the hospital stay, and a provisional diagnosis of a cervical myelopathy with peripheral neuropathy was made. Magnetic resonance imaging of the spine could not be performed because of the patient’s large size.

Over the following 12 months, the patient attended the weight control clinic at our hospital. He continued on an intensive regimen of Optifast VLCD three times a day for 5 months, and then began a transition phase (two Optifast VLCD meals plus one low-fat meal per day).

Over the 12 months, the patient’s weight fell steadily (Box 2, Box 3). At 1-year follow-up, he had lost 43% of his initial weight and was down to 96.5 kg (BMI, 26.7 kg/m2). He was normotensive (125/80 mmHg), and his fasting blood glucose and HbA1c levels were in the non-diabetic range. Full blood examination, electrocardiographic readings, and levels of electrolytes, calcium, magnesium, folate, vitamin B12, vitamin D and uric acid were normal. Liver function tests had normalised, and the lipid profile had improved significantly (Box 1). Bone mineral density (measured by dual energy x-ray absorptiometry) was normal at 6 and 12 months after commencement of the VLCD. Neurological symptoms improved, with persistence of limb weakness and sensory loss.

Planned management was to gradually reduce the Optifast diet and enter a supervised weight maintenance phase, which would include an education program about lifestyle changes, frequent clinic visits and close observation of weight.

VLCDs involve replacement of meals with foods or formulas providing 1675–3350 kJ/day. They are commonly used in medically supervised weight reduction programs for patients with BMI > 30 kg/m2 (or > 27 kg/m2 with obesity-related comorbidities), or for whom rapid weight loss is necessary. Several formulations are available without prescription (Box 4). VLCDs should provide at least 0.8 g protein per kilogram of ideal bodyweight per day (to preserve lean body mass1), along with the recommended daily allowances of minerals, vitamins, trace elements and essential fatty acids. Around 10 g/day fat is recommended to stimulate gallbladder contraction.2 Although optimal caloric and carbohydrate intakes are unknown, 50 g carbohydrate daily has been suggested as a suitable quantity to maintain normoglycaemia and to prevent loss of electrolytes and protein.2 There is no advantage in reducing energy intake below 3350 kJ/day.3

Treatment duration varies but is usually 8–16 weeks.1 To our knowledge, our report is the first to document the use of a VLCD for 12 months.

There is concern about the safety of VLCDs, most of which stems from the occurrence of over 60 deaths associated with a popular liquid protein diet, available in the 1970s, that consisted entirely of solutions of collagen or gelatine hydrolysates.4 Many of the deaths occurred in people with pre-existing comorbidities.4 However, 17 deaths (16 in women) occurred in relatively young (median age, 35 years) and otherwise reasonably healthy people. These 17 people, who were severely obese (mean BMI, 40.6 kg/m2), remained on the diet for an average of 5 months and lost a large amount of weight (mean, 35%). Postmortem findings were consistent with the cardiac effects of protein-calorie malnutrition (which include myocardial atrophy, QT prolongation and ventricular arrhythmias).5

In contrast, VLCDs in current use contain high-quality protein and appear to be safe.1 In 1998, Rössner described the case of a patient who had lived solely on a VLCD preparation for 46 weeks without medical supervision, in whom no adverse events occurred other than cholelithiasis and one episode of palpitations, after which ECG monitoring over a 24-hour period showed no abnormality.6

When beginning a VLCD, liver function tests, lipid profile measurements, a full blood count and iron studies should be carried out, and levels of electrolytes, creatinine and uric acid should be measured. Testing of electrolyte and creatinine levels should be repeated about 6 weeks after commencement, or earlier if more careful monitoring is required (eg, in patients who have renal impairment or are using diuretics). If the VLCD is to continue for more than 12 weeks, it is advisable to repeat the baseline tests at least every 2 months.7

Obese people typically achieve a mean weight loss of 1.5–2.5 kg per week using a VLCD. A 2001 meta-analysis concluded that, after using a VLCD, subjects maintained a significantly greater weight loss at 4.5 years (mean loss, 6.6% of initial weight) than after a hypocaloric balanced diet (mean loss, 2.1% of initial weight).8 Taking meal replacements once or twice daily in conjunction with a reduced-calorie diet is also effective for long-term weight maintenance.9

Advantages of VLCDs include the motivating effect of rapid weight loss, the convenience of meal replacement (which improves adherence compared with an ad-libitum low-fat diet)10 and a mild ketosis, which may suppress hunger.7 VLCDs also help with several obesity-related comorbidities by reducing levels of total cholesterol, low-density lipoprotein, triglycerides and blood glucose and by reducing blood pressure, insulin resistance1 and hepatic steatosis.11 All of these benefits were obtained by our patient.

Pharmacotherapy for weight loss has only modest benefits, with loss of around 3%–5% bodyweight over 1–4 years reported in a recent meta-analysis.15

The 43% weight loss achieved by our patient at 12 months is comparable with results reported for surgery. Weight maintenance will be his next major challenge. Increasing evidence indicates that physiological changes occur after diet-induced weight loss, including decreased levels of leptin, glucose, insulin, free fatty acids, cholecystokinin and triiodothyronine (T3), and increased levels of reverse T3 and ghrelin. Many of these changes would be expected to reduce satiety and increase hunger, possibly contributing to the weight regain frequently seen after weight loss. Our patient may continue to replace one meal a day with Optifast in the longer term to assist with weight maintenance. As there is growing evidence of physiological adaptations after weight loss that encourage weight regain, pharmacotherapy will be introduced if lifestyle changes prove insufficient to maintain his current weight. Bariatric surgery could also be considered if his weight loss cannot be maintained.

Our report shows that, under close medical supervision in certain obese patients, a VLCD may be used safely and effectively for a period of at least 12 months. Prevention of weight regain remains difficult. 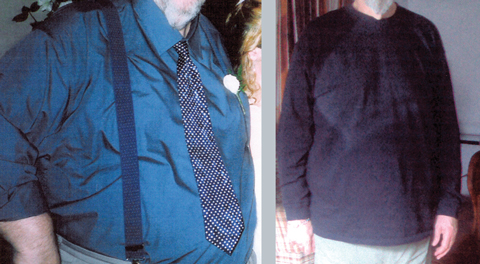 Priya Sumithran is supported by an Endocrine Society of Australia scholarship and a Royal Australasian College of Physicians Shields Research Entry Scholarship. These funding sources had no role in the writing of our article.

Joseph Proietto is Chairman of the Medical Advisory Committee for Optifast (Novartis).