Donough O’Brien was born on 24 June 1911 in Dublin, Ireland. He was brought up on the family’s country estate in County Limerick and later won scholarships to Bromsgrove School in England and to Trinity College Dublin, where he began a medical course in 1929. He graduated top of his year, with first class honours, in 1934. In 1939, he gained Fellowship of the Royal College of Surgeons (Ireland) and was awarded the Surgical Travelling Prize. 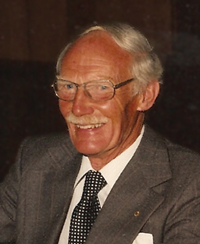 At the outbreak of war in the same year, he joined the British Army and spent 7 years as a surgeon in Scotland, Iraq, Egypt, Malta and Sicily. Early in the war, as a Duty Officer at Drymen in Scotland, he admitted and treated a “Captain Horn” for an injured ankle. It quickly transpired that the “captain”, who had flown a plane from Germany and landed in Glasgow, was in fact Rudolf Hess, who had come to the United Kingdom to try to negotiate a peace settlement with Winston Churchill.

Donough had married his first wife Pamela in 1941, and his daughter Caroline was born in 1943, but the marriage did not survive his years away on active service. After the war, he undertook postgraduate study in orthopaedics, then spent 2 years in Tanganyika. He later married Lucy Stafford, and in 1951 they emigrated to Scottsdale in Tasmania, where he worked as Superintendent at the Soldiers’ Memorial Hospital. A few years later, with their two sons Bart and Ken, they moved to Burnie, where he worked as Superintendent at the North Western General Hospital.

For some years, as the only surgeon on the north-west coast, he was constantly “on call”, but, as the staff and work at the hospital gradually expanded, he had more opportunity to develop his wide range of non-medical skills and interests.

Donough and Lucy were allotted a derelict house belonging to the hospital, with an overgrown garden on a steep hillside. Together they restored the garden, which became a place of beauty and solace. As active members of the Burnie Arts Council and the Coastal Arts Group, they shared their garden with writers, artists and actors, and were constant and delightful hosts to their wide circle of devoted friends. Both he and Lucy were artists themselves, Lucy also being a poet.

Donough was a skilled sailor, giving much time to the Burnie Yacht Club. There would always be a boat or two under repair in his shed. His passion for sailing was shared with his son Ken, who is now a sailmaker in Adelaide.

Retiring from the hospital in Burnie at the age of 65, Donough practised rehabilitation medicine for a further 10 years. In 1976, he was awarded Membership of the General Division of the Order of Australia for services to the community. He and his wife later moved to Adelaide to be near their family, after Lucy had undergone a series of unsuccessful operations for a hip condition.

Lucy died in 2005, and Donough died two years later, on 2 August 2007, of heart failure. He is survived by his three children.

Donough will be remembered as a fine surgeon, an accomplished artist, writer, sportsman, a loving husband and father, and an inspiration to all whose lives were enriched by his skills and by the warmth of his care and friendship.