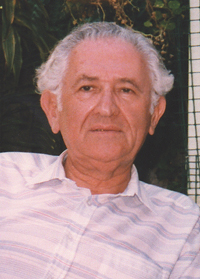 Roman was born on 13 October 1919 in Kraków, Poland. His mother, a dermatologist, treated venereal diseases in women, and his father, a cardiologist, trained under Karel Wenckebach. When the Nazis invaded Poland, Roman was tortured, resulting in bilateral brachial plexus palsies and a left hemiparesis, which worsened over the years. He was incarcerated in Plaszów and then Mauthausen concentration camps and liberated on 5 May 1945 — a day he celebrated in later years as his “re-birthday”. He became a fourth generation physician after World War II, completing his medical degree in Lódz in 1946.

He met his future wife Christine in the same year, fell madly in love, and married her after they had known each other for only 3 days. Their marriage lasted 61 years.

Roman migrated to Australia in 1947, studied medicine again at the University of Sydney, and became registered as a medical practitioner in 1952. He was proud to have been able to maintain his medical registration until the end of his life. In 1974, he was awarded Fellowship of the Royal Australian College of General Practitioners, and several years ago was recognised for his 50-year membership of the Australian Medical Association.

Practising in Newtown, Sydney, Roman had many migrant patients, owing to his reputation as a good doctor and his ability to speak seven languages. He was a member of the New South Wales Association for Mental Health and was on the committee for migrant mental health. He was a strong advocate for the establishment of an interpreter service, which is now widely used throughout the NSW health system. He opposed the use of children as interpreters for their parents because of the often sensitive nature of the problems discussed and the potential for mental harm to the children.

Roman was actively involved in the affairs of the Polish community in Australia, for which he was recognised by the Polish Government with the award of several medals, including the Knight Cross of the Order of Merit of the Republic of Poland (an award analogous to the Order of Australia). He was a Freemason, a strong supporter of many charities and a lover of books, history, music, travel and ball sports — in particular, football (soccer) and cricket.

Roman is survived by Christine, his daughter Monica, a nuclear medicine physician, and son Martin, a school teacher.