What’s hanging around your neck? Pathogenic bacteria on identity badges and lanyards

Main outcome measures: Presence of pathogenic bacteria on identity badges and lanyards; differences in bacterial counts on items carried by nurses and doctors.

Results: A total of 27 lanyards were identified with pathogenic bacteria, compared with 18 badges. Analysing lanyards and badges as a combined group, seven had methicillin-resistant Staphylococcus aureus, 29 had methicillin-sensitive S. aureus (MSSA), four had Enterococcus spp and five had aerobic gram-negative bacilli. Lanyards were found to be contaminated with 10 times the median bacterial load per area sampled compared with identity badges. There were no significant differences between nurses and doctors in total median bacterial counts on items carried, but doctors had 4.41 times the risk of carrying MSSA on lanyards (95% CI, 1.14–13.75).

Conclusion: Identity badges and lanyards worn by HCWs may be contaminated with pathogenic bacteria, which could be transmitted to patients. In view of this finding we suggest appropriate infection control interventions.

It is well known that hospital pathogens can be transmitted from the hands of health care workers (HCWs) to patients.1 This may occur through direct contact with the patient or indirectly, via an inanimate object. Many articles of clothing and equipment, such as neckties,2-9 doctors’ coats,10-12 stethoscopes13-17 and pens,18,19 have been noted to carry potential pathogens.

Items such as the ends of neckties have been suggested as potential sources of nosocomial infection because of their position at waist level, their tendency to swing freely as the wearer leans forward and the fact that many are not machine-washable. Most are capable of being colonised with bacteria, including pathogens such as methicillin-resistant Staphylococcus aureus (MRSA).4,20 Similarly, plastic identity badges attached to fabric lanyards hang around the front of the body, where, because of their pendulous nature, they can come into contact with patients and may act as a source of infection (Box 1).

A literature review did not reveal any published investigations of bacterial colonisation of identity badges and lanyards worn by HCWs. The objective of our study was to determine the level and type of contamination that may be present on these items. We also examined the relative risk of pathogen carriage between nurses and doctors and documented clinical bacterial isolates from selected wards during the study period.

Fifty-nine HCWs from three clinical wards (renal, gastroenterology and intensive care units) volunteered to participate in our study, which was conducted from July to August 2006. Twelve infection control HCWs acted as non-clinical controls. Imprints from 10 unused lanyards were cultured to provide an estimate of environmental background contamination. HCWs were asked to estimate the time (in months) that their lanyard had been in use. Data were also collected on items attached to the lanyards (eg, clips, keys) and on the type of lanyard used (hospital-issued nylon or other). Our study was approved as a quality research project by the Southern Health Human Research Ethics Committee.

Four samples were collected from each HCW:

Samples were cultured directly onto horse-blood and MacConkey agar, and also enriched in tryptone soy broth and cultured onto selective media for MRSA and Enterococcus spp.

We used the computerised laboratory information system to extract a list of the types of pathogenic bacteria responsible for clinical infections in the wards studied during July and August 2006.

Data were summarised as total numbers (column percentages) for categorical variables and median (interquartile range) for continuous variables. Baseline comparisons were made using the χ2 test where appropriate. Binomial regression analysis was performed to assess the risk of pathogen contamination between clinical staff, adjusted for ward location. A relative risk (RR) greater than 1.0 indicated groups at increased risk. We declared a finding to be statistically significant if the two-sided P value was less than 0.05. All analyses were conducted using Intercooled Stata software, version 8.2 (StataCorp, College Station, Tex, USA).

HCW demographics and badge and lanyard bacterial counts are summarised in Box 3.

The variety of connections recorded included keys, clips, badges, pens, brooches, safety pins, torches, bulldog clips, scissors, a Stanley knife, a laser pointer, a toy, a calculator, a computer memory stick, and micropore and transpore tapes. Median bacterial loads were 10-fold greater for lanyards (3.1 CFU/cm2) than for identity badges (0.3 CFU/cm2). There was no correlation between the total number of bacteria recovered from lanyards and the duration of use.

The number and type of pathogens recovered from identity badges and lanyards are shown in Box 4. Of the connection swabs, five had MSSA and two had Enterococcus spp; of the swabs from the distal edge of identity badges, seven had MSSA, one had MRSA, one had Enterococcus spp, and one had GNB. Enterococci were identified as E. casseliflavus, E. gallinarum and E. faecium, and none were found to be vancomycin-resistant. GNB were identified as Escherichia coli, Klebsiella spp (Box 5) and Enterobacter spp.

There were no statistically significant differences between nurses and doctors in the estimated duration of lanyard use, the type of lanyard used, ward location, total number of bacteria on identity badges or lanyards, or number of total connections hanging off the lanyards.

A comparison of the RRs of isolating pathogens from the identity badges or lanyards of nurses and doctors (adjusted for ward location) is shown in Box 7. Doctors were found to have over four times the risk of carrying MSSA on lanyards compared with nurses (RR, 4.41; 95% CI, 1.41–13.75; P = 0.01). There were no differences detected for identity badges.

Identity badges and lanyards worn by HCWs frequently come into contact with patients and the clinical environment, and it is reasonable to expect that they could become colonised with nosocomial pathogens. To our knowledge, our study — in which pathogenic bacteria such as MRSA, MSSA, Enterococcus spp and GNB were recovered from both lanyards and identity badges — is the first to demonstrate that contamination of such accessories is possible. Furthermore, we showed that lanyards were particularly contaminated, carrying a median bacterial load 10 times greater, per unit of surface area, than identity badges.

Previous studies have documented that potential pathogens can be recovered from many articles of clothing worn by HCWs. The organisms identified have mainly been skin commensals (including MSSA), but two studies have detected MRSA on doctors’ neckties4,9 and another detected MRSA on the membranes of physicians’ stethoscopes.16

Bacterial contamination of HCWs’ clothing and equipment may often come indirectly from the hospital environment rather than from infected patients.21 Contaminated clothing or equipment provides a reservoir from which HCWs may reinoculate their hands, even after hand hygiene procedures have been performed, thus allowing transmission of pathogens to patients or the environment. The British Medical Association (BMA) has suggested that doctors refrain from wearing non-essential items of clothing, such as ties, as they have the potential to act as a vector for the transmission of infections.22 However, the evidence supporting the BMA recommendation is limited. Although potential pathogens such as S. aureus have been isolated from doctors’ neckties,20 in most studies only a small number of ties were tested.

Lanyards and identity badges are worn by both male and female clinical staff for long periods of time without cleaning. Their position at waist level and their pendulous nature increase the risk that they will become contaminated. Studies have shown that bacteria survive for long periods on hospital fabrics and plastic surfaces, with gram-negative bacteria surviving for over 60 days and enterococci and staphylococci for over 90 days.23,24 Patients with MSSA, MRSA, Enterococcus spp and GNB infections were present in all three wards included in our study, and these typical hospital pathogens were recovered from identity badges and lanyards.

Our study showed that doctors are four times more likely than nurses to carry MSSA on their lanyards. A recent observational study by Pittet et al25 showed that compliance with hand hygiene protocols is low among doctors compared with nurses, and this may help to explain the greater contamination of doctors’ lanyards with hospital pathogens in our study. However, further larger studies are required to compare the carriage rate of potential pathogens by doctors and nurses.

One limitation of our study is that we did not assess HCWs for carriage of S. aureus in the nares or on the hands, and so could not correlate this with S. aureus isolated from the lanyard set. Although HCWs estimated how long they had used the lanyards, we were unable to establish at what point they became contaminated with pathogens. The literature suggests that a steady state of maximum contamination is reached quickly and does not significantly change thereafter.10 A prospective study to determine the timing of acquisition and duration of bacterial contamination in a clinical setting may be useful.

Although it is not easy to establish the precise role that identity badges and lanyards may play in transmission of nosocomial infections, our study adds to the growing data on HCWs’ clothing and equipment as potential vectors. Unlike ties, identity badges are constantly touched by HCWs’ hands, and this action can recontaminate hands with pathogens, even after hand hygiene procedures have been followed. Regular disinfection of identity badges may reduce bacterial pathogen contamination, but, ultimately, strict staff hand hygiene is the best way to prevent cross-infection. 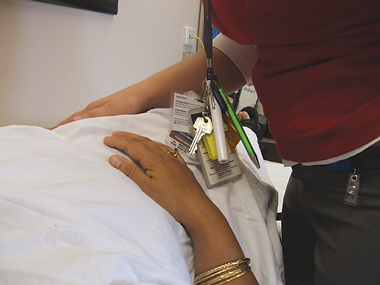 4 Pathogenic bacteria isolated from identity badges and lanyards, by unit

6 Number of patients with clinical isolates during the study period, by unit

7 Number of health care workers with pathogens isolated from identity badges and lanyards. A comparison of nurses and doctors, adjusted for ward location

We would like to thank Associate Professor Damien Jolley (Senior Biostatistician) for his advice on our statistical analysis.