Aileen Plant died unexpectedly at Jakarta airport on 27 March 2007, cutting short a life of exceptional achievement. Her warmth and wisdom had touched many people — as a favourite aunt, friend, confidante, researcher, colleague, mentor, and valued health adviser. Yet her influence stretched far beyond Australia. As an adviser and leader in international public health, she was highly regarded by Margaret Chan, now Director-General of the World Health Organization. In the words of David Heymann, a long-time friend, “the world is a better place because of her life”. 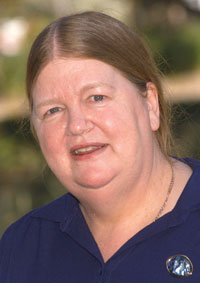 Aileen Joy Parnell was born in Warrigal, Victoria, on 9 July 1948, the fourth of eight children. She left school at 14 years of age, working on the family farm and then in a bank, before studying medicine at the University of Western Australia. Although her marriage to Roger Plant, a fellow student, ended soon after graduation, she always remained close to the Plant family.

In 1977, Aileen worked at Charles Gairdner Hospital in Perth, and then at the Royal Darwin Hospital, where her clinical experiences triggered a life-long commitment to Aboriginal health. After obtaining a Diploma of Tropical Medicine and Hygiene in London, she returned to Darwin in 1982, working for several years as a senior registrar and administrator. Following a period in Sydney as a graduate student, teacher and public health practitioner, she returned to Darwin in 1989 as Chief Health Officer for the Northern Territory.

Aileen clearly saw the importance of linking public health practice to research and education. Accordingly, she moved to the Australian National University, Canberra, in 1992 to teach the Master of Applied Epidemiology, which set new standards in communicable disease training in cooperation with government agencies.

Aileen returned to the University of Western Australia in 1995 and became Professor of International Health at Curtin University, Perth, in 2000. She was highly influential in communicable disease planning through the Communicable Diseases Network Australia and as Deputy Director of the Australian Biosecurity Cooperative Research Centre. She was also a valued communicable disease adviser for the WHO through the Global Outbreak and Alert Response Network, and became a global troubleshooter, unscrambling disease outbreaks in many countries. With the emergence of severe acute respiratory syndrome (SARS), she was one of the first WHO experts to go to Hanoi, using her expertise to help control the local outbreak. Subsequently, the Vietnamese Government awarded Aileen its highest civilian medal. She also consulted regularly in Geneva, in Canberra and in the region, providing advice to the WHO, Indonesia and other countries on tuberculosis control and influenza surveillance.

Aileen collaborated with many other researchers to publish over 90 high-quality articles on tuberculosis, Aboriginal health, migrant health, health services, medical education, and disease surveillance and control. Her outstanding networking skills, learnt as a middle child in a large family, made her an inspirational leader and mentor for many others in later life.

Well remembered as a friend and wonderful human being, Aileen was greatly admired for her idealism, integrity, empathy, humility, energy, originality, breadth and depth of intellect, and commitment to evidence. Her capacity to care for people, to work round problems, and also around problem people, underpinned her many achievements. We will particularly miss her sense of humour. She would have appreciated the irony that the ceremony to commemorate her life, attended by family and many friends and colleagues, took place on Friday the 13th of April.

Chronic asthma, dating from adolescence, plagued Aileen for much of her life. Her sudden death was attributed to acute haemorrhagic pancreatitis complicating a short gastrointestinal illness. She is survived by her siblings, parents-in-law and 33 nephews and nieces.