David Jones combined a love of medicine and mathematics with an incredible humanitarian spirit. As the first medical statistician in the New South Wales State Health Department, he made a significant and passionate contribution to the advancement of Aboriginal health in the 1970s, collaborating with Fred Hollows on the National Trachoma Project and with Max Kamien in studying Aboriginal health issues in Bourke, north-western NSW. 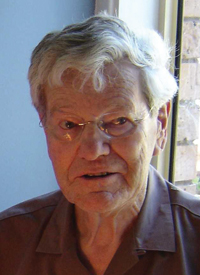 Compassionate and non-judgemental with people, irrespective of their situation, David was incredulous at needing to redefine the statistical categories of housing levels for Aboriginal people so that he and his colleagues could conduct their work (all were below the lowest standards for white housing). He was also shocked that only one doctor in the divided town of Bourke in the 1970s would treat Aboriginal people.

David was born on 2 February 1926 in Adelaide and attended King’s College (now Pembroke School). He graduated in medicine in 1950 and, after doing his residency at Royal Perth Hospital, worked as a general practitioner in Busselton, south-western Western Australia, from 1954 to 1959. He later worked in the Department of Quarantine service at Port Adelaide (1960–1961). In this capacity he visited incoming ships, often in the middle of the night, climbing rope ladders from rocking dinghies. He also worked for the Commonwealth Health Poliomyelitis Services (1961–1962).

On completing a Bachelor of Science degree at the University of Adelaide (majoring in mathematics and statistics) in 1963, David entered the new field of medical statistics as a research fellow in the Lung Cancer Registry of the University of Sydney’s Department of Medicine, at a time when links between lung cancer and smoking were being established. In the NSW State Health Department, he also set in place sampling protocols for assessing height and weight of children, and produced a landmark report comparing urban, rural and immigrant children. He obtained a Master of Applied Statistics degree from Macquarie University, Sydney, in 1985.

David was an intellectual with remarkably broad interests, ranging from the sciences to music, classical literature and languages. He came from a musical Welsh family and had a great love of classical music, especially early music. In retirement, he learnt to play the organ, sang in a choir and learnt Welsh. He was a staunch life-long churchgoer.

David was a reclusive, self-effacing, generous man whose life centred on his family. He expressed a pragmatic humour about ageing and death. He died in his sleep of congestive heart failure while recovering from pneumonia in hospital. His condition remained undiagnosed at the time of his sudden and unexpected death on 18 December 2006 at The Entrance, NSW. He is sadly missed by his wife Ena and daughters Ceridwen, Euronwy and Menna.