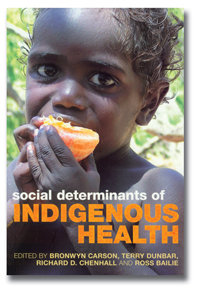 Forty years have passed since the 1967 referendum on whether Aborigines should be counted in the census. This anniversary led, yet again, to demands for greater effort and tangible improvement in Aboriginal and Torres Strait Islander health. Then, suddenly, a report on the neglect of children in the Northern Territory provoked action by the federal government. Whether this will help is hard to predict, but the matter certainly has national attention. Right now, at least, some politicians have joined the new President of the Australian Medical Association in making Indigenous health priority number one.

Is a text on the social determinants of Indigenous health relevant to this election-year drama? The book is based on a series of courses funded by the Public Health Education and Research Program (an initiative of the Australian Government Department of Health and Ageing). It provides introductory material that belongs to the cultural curriculum of modern Australia in general, and medical education specifically.

The authors first explain social models of health and epidemiology, and then move on to topics of more or less immediate importance to health status, including racism, poverty, education, employment, welfare, housing, and human rights. These issues were never more relevant than now.

A second question applies more to the average reader of the Journal, concerned with the provision of medical care. What does this book add to the coverage of Indigenous health topics needed by clinicians? These readers will probably turn to the last chapter, on interventions and sustainable programs. Three examples cover “healthy lifestyle”, with a focus on diet, exercise, and smoking cessation; injury prevention and safety promotion; and the measurement of the impact of alcohol and drug treatment programs. The key elements identified are not surprising, including governance, accountability, and appropriate staffing. Any clinician can get involved by contributing to the provision of health services. These examples show that it is possible to reach beyond the current rhetoric of disgrace.