Objective: To measure the prevalence of overweight, obesity and the metabolic syndrome (MetS) in rural Australia.

Design, setting and participants: Cross-sectional surveys were conducted in two rural areas in Victoria and South Australia in 2004–2005. A stratified random sample of men and women aged 25–74 years was selected from the electoral roll. Data were collected by a self-administered questionnaire, physical measurements and laboratory tests.

Main outcome measures: Prevalence of overweight and obesity, as defined by body mass index (BMI) and waist circumference; prevalence of MetS and its components.

Conclusions: In rural Australia, prevalences of MetS, overweight and obesity are very high. Urgent population-wide action is required to tackle the problem.

Data from the Australian Institute of Health and Welfare show that there have been marked increases in the prevalence of overweight and obesity in Australia since 1980.1 The 1999–2000 Australian Diabetes, Obesity and Lifestyle Study (AusDiab) showed that 48.2% of men and 29.9% of women were overweight, and 19.3% of men and 22.2% of women were obese.2 Such studies have been conducted primarily in urban areas of Australia and there is little comparable data from rural areas.

Obesity is an important modifiable risk factor for many chronic diseases, including cardiovascular disease (CVD), type 2 diabetes, hypertension, hypercholesterolaemia, certain types of cancer, osteoarthritis, gallbladder disease and mental health problems.3 The traditional CVD risk factors of smoking, hypertension and hypercholesterolaemia have been the main focus of prevention and treatment programs for several decades, with only limited attention given to obesity.4 Recent guidelines show increasing recognition that global risk — integrating a person’s individual risk factors with age, sex and any vascular disease already present — is central to risk factor assessment and management.5

In recent years, a clustering of risk factors (hyperglycaemia, hypertension, hypertriglyceridaemia, low levels of high-density lipoprotein [HDL] cholesterol, and overweight/obesity) identified as “metabolic syndrome” (MetS) has gained widespread recognition.6-9 MetS is strongly associated with an increased risk of type 2 diabetes and CVD.10 The AusDiab study11,12 showed that the prevalence of MetS among adults aged 25 and over in Australia was 19.3% according to US National Cholesterol Education Program Adult Treatment Panel III (NCEP ATP III) criteria7 and 29.1% according to International Diabetes Federation (IDF) criteria.9 No specific data on the prevalence of MetS are available for rural Australia.

The aim of our study was to assess the prevalence of overweight, obesity and MetS in a sample of Australians living in rural areas.

Two cross-sectional population surveys of chronic disease risk factors and related health behaviour were carried out in the Greater Green Triangle region of south-eastern Australia (Box 1).13 The first survey was conducted in August–October 2004 in the Limestone Coast (LC) region of south-eastern South Australia (including the towns of Mount Gambier, Penola, Millicent, Kingston SE, Naracoorte, Lucindale, Bordertown, Keith and Robe). The second survey was conducted in February–March 2005 in Corangamite Shire (CO) in south-western Victoria (including the towns of Camperdown, Cobden, Terang, Timboon and Lismore). These two regions are predominantly rural dairy and sheep farming areas with a mainly Caucasian population. According to the Rural, Remote and Metropolitan Areas Classification,14 all survey sites except Mount Gambier were categorised as “other rural areas” (having < 10 000 inhabitants).

For both surveys, a stratified random sample of the population aged 25–74 years was drawn from the electoral roll. Stratification was made by sex and 10-year age group (with the exception of the 25–44-year age group, which was treated as one stratum). The number of participants sampled in each sex and age group was 140 in LC and 125 in CO. Thus, with four age groups for each sex, the original sample consisted of 1120 people in LC and 1000 people in CO. Forty-two people who had died or moved to another area were excluded, leaving a sample of 2078. Of those, 552 people in LC (response rate, 51%) and 415 persons in CO (response rate, 42%) agreed to participate in our study.

The questionnaire, together with an invitation to attend the health check, was sent by mail to all selected participants. The questionnaire included questions on health behaviour, symptoms, diseases, medical history, socioeconomic background and psychosocial factors. Health checks were carried out in local health centres or at other survey sites by specially trained nurses.

In the health check, weight was measured by a beam balance scale and height by a stadiometer attached to a wall. Body mass index (BMI) was computed as weight (kg) divided by height squared (m2). Participants were classified by BMI into one of four groups: underweight (BMI < 18.5 kg/m2), normal weight (BMI 18.5–24.9 kg/m2), overweight (BMI 25.0–29.9 kg/m2) or obese (BMI > 30 kg/m2).3 Waist circumference was measured at a level midway between the lower rib margin and iliac crest with the tape all around the body in a horizontal position. The mean of two measurements was calculated. Men were classified as overweight if they had a waist circumference of 94.0–101.9 cm and obese if the measurement was ≥ 102.0 cm.3 The corresponding values for women were 80.0–87.9 cm and ≥ 88.0 cm, respectively.

Two definitions of MetS were used:

1. The most recent NCEP ATP III definition.8 Three or more of the following are present:

2. IDF definition.9 The subject has central (abdominal) obesity with waist circumference ≥ 94 cm (men) or ≥ 80 cm (women) (Caucasian criteria), plus two or more of the following:

We analysed the results on 806 participants for whom information on obesity and MetS was available. Statistical analyses were undertaken using SPSS software, version 14.0 (SPSS Inc, Chicago, Ill, USA). We calculated age- and sex-specific prevalences and overall prevalences. Overall prevalence rates were age-standardised according to the local populations and to the 2001 Australian population aged 25–74 years,17 as appropriate.

The background characteristics of the study population are shown in Box 2.

The prevalence of central obesity, whether defined by NCEP ATP III or IDF criteria, tended to increase with age in both sexes (Box 4).

Prevalence of metabolic syndrome and its components

Most of the components of MetS (central obesity, hyperglycaemia, hypertension and hypertriglyceridaemia) increased with age (Box 4), but trends in HDL cholesterol levels were less clear.

To our knowledge, our survey is the most recent risk-factor prevalence study to be conducted in rural Australia and the first to report on the prevalence of MetS and its components in rural areas. We collected objective data and used random sampling with a well defined methodology. Although the participation rate was relatively low, a comparison of the socioeconomic background — including primary occupation, rate of unemployment and total gross income of the survey participants — with population statistics available17 indicated that the participants closely represented the true populations of the areas surveyed.13,17

Of particular concern was the high rate of overweight and obesity revealed by our study (64.1% in women and 74.1% in men). These figures are substantially higher than in the 1999–2000 AusDiab survey,2,12 which showed 52% of women and 68% of men were overweight or obese. Similarly, our findings on the prevalence of central obesity (61.9% in men and 72.4% in women) are worse than those reported in the AusDiab study (55% in men and 57% in women).2,12 It appears that the prevalence of overweight and obesity, as defined by BMI, is greater in men than women, whereas the reverse is observed if a waist circumference definition is used.

Australian trends in BMI derived from six studies done since 1980 are summarised in Box 5. Despite the limitations in comparing the different studies, there are some clear trends. In 1980, 59.2% of the adult population was of normal weight,1 compared with only 30.6% in our 2004–2005 study. The prevalence of normal weight has consistently fallen, while the prevalence of obesity has increased dramatically: the obesity prevalence of 29.3% in our survey (standardised to the 2001 Australian standard population17) was more than three times higher than in 1980.1 Although direct comparison is limited by differences in study populations and methodology, the data available show that between the 1989 National Heart Foundation of Australia (NHFA) Risk Factor Prevalence Study19 and our survey, mean height had not increased in either sex but mean weight had increased by an average of 10 kg for both sexes. Waist circumference had also increased markedly, by an average of 16 cm in women and 12 cm in men, and hip circumference had increased by 8 cm in women and 3 cm in men. This increase in waist circumference is even greater than that reported in the 1999–2000 AusDiab study,2,12 which showed an increase of 7 cm in men and 8 cm in women compared with 1989. These figures are all consistent with an increase in central obesity that has been strongly linked to the development of diabetes20 and myocardial infarction.21

The use of different definitions of MetS6-9 makes international comparisons difficult. In the 1992 FINRISK cohort,22 in which modified WHO criteria were used, MetS was found to be present in 38.8% of men and 22.2% of women. In a US study using NCEP ATP III criteria, MetS was present in 31% of men and 35% of women.7,23 Regardless of the definitions used, the prevalence of MetS is high and increasing worldwide.

As Box 5 illustrates, early warning signs of the overweight and obesity epidemic were apparent from the NHFA 1989 data,1 yet insufficient notice was taken at the time. Now that there is a major problem, with only 30% of the population within the “normal weight” range, urgent action is required at the highest level to change unhealthy lifestyle habits by improving diet, increasing physical activity and making our environments supportive of these objectives.

Major lessons can be learnt from previous successful initiatives in reducing cigarette smoking, particularly the need for population-based interventions and an ongoing monitoring and surveillance system to determine the impact of interventions. The approach in Finland is to conduct 5-yearly surveys using objective measurements and blood sampling.24 In contrast, current surveillance systems such as the Australian Bureau of Statistics national health surveys25 and statewide computer-assisted telephone interviews,26 which use self-reported height and weight data, consistently underestimate the true prevalence of overweight and obesity. 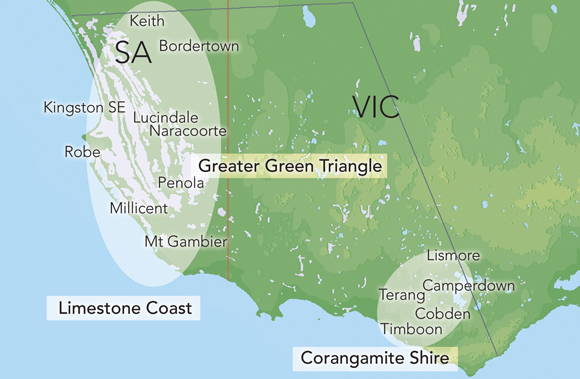 2 Characteristics of our study sample, expressed as mean (95% CI)

3 Prevalence of overweight and obesity, by region and assessment method, expressed as percentage (95% CI)*

4 Prevalence of overweight, obesity, metabolic syndrome (MetS) and the components of MetS, by sex and age, expressed as percentage (95% CI)*

We thank Ms Anna Chapman, Dr Andrew Baird, the nurses carrying out the survey and regional hospitals providing facilities for our study. The study was supported by the Australian Government Department of Health and Ageing, the Royal Australian College of General Practitioners, Sanofi-Aventis, Pfizer and Roche Diagnostics.

Within the past 2 years, Edward Janus has received travel support from AstraZeneca and Pfizer, and honoraria and speaker fees from AstraZeneca, Sanofi-Aventis, Roche, Fournier, Servier and Pfizer. However, no pharmaceutical products were used in our study.