Protecting little children’s health — or not?

The timing of the federal government’s intervention to protect little children in the Northern Territory has been viewed by some with cynicism. And well it might be. The intervention needs to be seen in the broader context of what could be called the “white blindfold” view of history. The white blindfold obscures the benefits that modern Australians have inherited as a consequence of European colonisation of this country. It hides any understanding of how dispossession of the Aboriginal first nations has resulted in the poverty, illness and violence that the government is now, belatedly, seeking to rectify.

The current neoliberal ideology also prevents understanding of the mechanism of how dispossession and marginalisation have caused the spiritual, mental, social and physical dis-ease that we see at present. In not understanding the causal links, the government is not able to properly arrive at a workable solution. In fact, the approach being trialled stands a good chance of making the underlying problem worse.

Work by Marmot1 and Wilkinson2 and insights from de Botton3 and Freire4 throw light on the background and mechanisms whereby the process of colonisation and the ongoing situation of Indigenous people in Australia today translate into physical and mental illness and social discord.

The argument, most simply put, is that inequalities, especially overt economic and social inequalities, cause people lower in the pecking order to feel inferior. Even worse, the “lower orders” feel disrespected by their “superiors”. It is the perception of disrespect, manifest in many minor ways, and perhaps not even consciously expressed and received, that drives the sense of inferiority. Through neurological, endocrine and immunological networks, disrespect and inferiority become internalised as immune suppression, inflammation, and acute and chronic illness. Externally, they emerge as substance misuse, risk-taking, violence and social discord.

The foundation social determinants of health are social equality and respect. In today’s Australia, particularly in relation to Indigenous people, these are fragile, tenuous, or perhaps even lacking.

The logical solution is to create a more equal, tolerant and respectful society. That doesn’t mean handouts and welfare. It does mean working in a respectful manner and offering a partnership approach to helping with economic and community development. The most respectful approach involves listening to community leaders. After all, it is the leaders who have been struggling with the problems for a long time and may have some ideas about locally applicable solutions.

Has the federal government’s intervention taken a respectful, tolerant, partnership approach in seeking to improve the lot of children in the NT?

No one can claim that it has. From the outset, the intervention has been styled as strong, decisive action. The situation has been framed as an emergency. Consultation with Aboriginal leaders has come later and has been approached in the vein of “this is how you are going to do what we want”. In the federal government’s haste to be seen to be responding to the Ampe akelyernemane meke mekarle: “little children are sacred” report,5 there has been talk of children being forensically examined and uncertainty about what will happen. Scared parents are disturbed by these developments and by the stories of older people who still hold clear memories of the stolen generations — another thing obscured by the white blindfold. Are Aboriginal leaders and the communities they lead feeling respected? 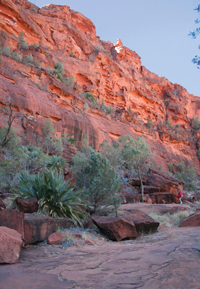 The intervention is not implementing any of the recommendations of the “Little children are sacred” report. There are moves to change rules of access to Aboriginal land and there is talk about changing the Aboriginal Land Rights (Northern Territory) Act 1976 (Cwlth). The links between such changes and saving little children are not well spelt out. It is not clear what impact these aspects have on economic development. How does this leave Aboriginal people feeling?

In 1989, the National Aboriginal Health Strategy was developed by Aboriginal leaders in partnership with government. It recommended that $2.5 billion be spent nationally over 5 years to achieve improvements in Aboriginal health. In fact, only $232 million was allocated over the 5 years. Since then, Aboriginal health leaders have repeatedly called for adequate funding. In the NT, calls to establish the Primary Health Care Access Program have, until recently, received a muted response from all levels of government. Now, in the lead-up to a federal election, between $0.6 and $1.3 billion has suddenly become available to save Aboriginal children. How do you think Aboriginal people are feeling about that?

The other collateral damage is occurring among the doctors, nurses and Aboriginal health workers who, for years, have been doing their best in a resource-poor environment to treat the sick and improve health. How do they feel about this sudden flood of resources that is bypassing the services they are working in, and the unspoken implication that perhaps they haven’t been doing their job well enough?

Not that this new bucket of money is not recognised as potentially useful. People are only too aware of the need. As the local analogy goes, the steamroller is coming through: no point lying in the road and getting squashed — let’s run alongside and see what falls off. Maybe we can even nudge it in a more appropriate direction.

The key question is whether the government’s intervention will be effective. The answer depends mainly on one’s definition of “effective”. If we were to define effective as creating healthier, more economically robust and socially cohesive Aboriginal communities in the NT, then I am not confident that the present approach can deliver that. This is because the current approach is essentially disrespectful of Aboriginal people and is further marginalising their leadership. In other words, the fundamental social determinants of NT Aboriginal health are being undermined.

Were the intervention to be reconfigured and the money invested in a way that supported Aboriginal leaders to build their own capacity and to develop a community response, then I would be much more confident that long-term good will come from it. Community building projects that have been run in other Australian jurisdictions have demonstrated that this approach works — for example, the Windale Community Renewal Scheme in New South Wales.6 There is, besides, an established primary health care sector operating in the NT which, with adequate funding, would be well positioned to do more of what it is already doing.

The political will to take action has obviously been present. There is bipartisan support for it to continue. What will be most interesting will be to see what happens once the election is over and the process of governing the country for the next 3 years begins. Will the federal government continue in the same disrespectful manner or will it be open to a change in approach that might truly make a difference?