In the name of the children 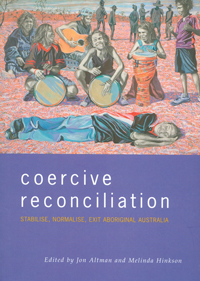 In June 2007, in response to a Northern Territory report on Aboriginal child sexual abuse, the Australian Government declared a national emergency, with interventions aimed at protecting Aboriginal children. While few deny the need for action to address the problems in Aboriginal communities, the sheer scale of the intervention has left many confused. We now have, in one volume, a series of 30 (mainly critical) essays about various aspects of the intervention, written by knowledgeable commentators, many of whom are Aboriginal.

One overriding theme that emerges from the essays is that a lack of community engagement means that the intervention is destined to fail, with potentially disastrous results for Aboriginal people. Tom Calma states that the “. . . fundamental elements of good Indigenous policy . . . engagement, participation and accountability” are missing. Raimond Gaita argues that “No plausible description of the plight of the Aboriginal communities can justify . . . the lack of consultation and the reckless disregard for the consequences of the intervention”. He asks: “Could such disrespect be shown to any other community in this country?” He believes not, suggesting that “. . . Aborigines and their culture are still seen from a racist, denigrating perspective”. John Sanderson (former Australian Army Chief and Western Australian Governor) suggests that the intervention ignores the known effects of cultural and social disempowerment on physical and mental health.

Some suggest that the child health checks, at least, may be worthwhile. However, as Ian Anderson points out, the health checks were initially going to be mandatory and forensic, but were appropriately changed to be wellness-focused and voluntary. As the Government had already started to roll out Medicare-funded Indigenous child health checks, this aspect of the intervention is just window-dressing — other components of the intervention will have bigger and more worrying effects.

After reading the essays, the reader must be concerned about the potentially devastating impact on Aboriginal health and wellbeing of this perhaps well intentioned, but ultimately ideologically driven, intervention. The medical profession has a responsibility to be informed about what is happening. This book will help — it should be widely read.