A 50-year-old woman presented to her dermatologist in 1999 with a 6-month history of recurrent pruritic scaly plaques on the abdomen, arms and hairline. The rash, which was presumed to be seborrhoeic dermatitis, improved after treatment with systemic prednisolone. No skin biopsies were taken at the time.

In 2004, she developed a leonine facies (Box, A), widespread erythroderma, alopecia, generalised peripheral lymphadenopathy, hyperkeratosis of the palms, and bilateral swollen pinnae with otorrhoea (Box, B).

The patient’s condition deteriorated despite treatment with methotrexate, prednisone, bexarotene, interferon, psoralen and ultraviolet A, as well as extracorporeal photopheresis.

The patient died in 2006, 8 years after initial presentation.

Cutaneous T-cell lymphomas typically present as indolent cutaneous eruptions and are often misdiagnosed at initial presentation, as the skin lesions mimic common dermatological disorders such as eczema or psoriasis. 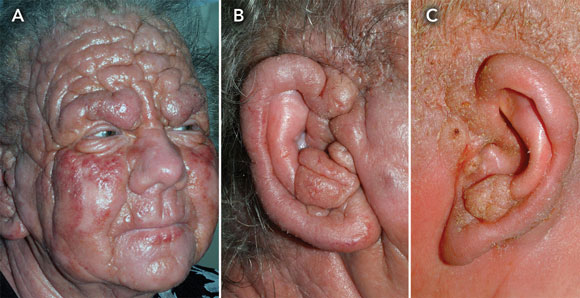 Acknowledgements: We would like to thank Di Vickers, Medical Photographer, and Robyn Proctor, Nurse, Department of Otolaryngology, of Whangarei Hospital, New Zealand.