Alexander (“Alec”) Gonski, a pioneer of neurosurgery in Australia, died on 25 September 2006 after developing progressive multi-organ failure. When the news of Alec’s death reached the executives of the Coast Golf Club in Little Bay, Sydney, small black flags were attached to the poles of all 18 holes as a sign of respect for its first president. His effort in establishing the golf course exemplified the pioneering spirit that was a feature of his life. 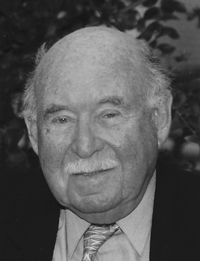 Born in Łódź, Poland, on 7 July 1919, Alec later migrated to South Africa, where he completed his medical degree in 1944, briefly interrupted by serving in the Allied Army in Egypt. From 1947 to 1951, he trained in neurosurgery in Edinburgh, then returned to Capetown to resume his career. Christiaan Barnard was one of his registrars.

In 1961, Alec was recruited to establish a neurosurgical unit at Prince Henry Hospital at Little Bay as part of the new teaching hospital of a very young University of New South Wales. Together with James Lance, the newly appointed Head of the Department of Neurology, Alec established a world-class unit of combined neurology and neurosurgery at Prince Henry Hospital. By the time of his retirement in 1985, the unit was the largest in the state, with six neurosurgeons — all but one trained by him personally.

Alec was a very skilful surgeon. He began his career at the very infancy of neurosurgery. Despite the rudimentary diagnostic and operating equipment (computed tomography and magnetic resonance imaging were not available until the 1970s and 1980s, respectively), his patients’ outcomes were excellent. He was also a great teacher. His quiet, gentle manner and humour, interspersed with interesting vignettes, made ward rounds and operating sessions enjoyable as well as educational.

Alec was closely involved with the University of NSW, where he taught anatomy for 16 years. Many of the specimens he dissected are still kept in the University’s Anatomy Museum and are tagged with his name.

Alec remained active as a clinician for many years after retiring from Prince Henry Hospital. He continued to publish articles on the investigation and management of spinal and cerebral conditions. His monograph, A beginner’s guide to neuroanatomy, published only a month before his death, is freely available on the Internet at http://www.amsa.org.au/docs/GonskiNeuroanatomypdf.pdf.

In his leisure time, Alec thoroughly enjoyed the outdoor life. Besides being a keen golfer, he enjoyed watching cricket and was passionate about sailing. With the help of his neurosurgical and carpentry skills, he built his first boat in the backyard. He also loved spending time with his children and grandchildren.

Alec’s remarkable contribution to his adopted country was recognised by the award of Member of the Order of Australia in 2003. He will be remembered for his clinical skill, humility and commitment to medical education. He is survived by his wife of 54 years, Hélène, and children David, Peter, Stephen and Lisa.