Radiographs of a woman presenting with abdominal pain revealed a large foreign body within the pelvis. A diagnosis of perforation of the colon was made, and at laparotomy an 8.5 cm long glass fragment was removed from the bowel. A laceration to the lower back, sustained in a fall onto a glass coffee table, had been explored and sutured 20 months earlier. Imaging findings showed the subsequent course of the overlooked glass fragment within the pelvis. 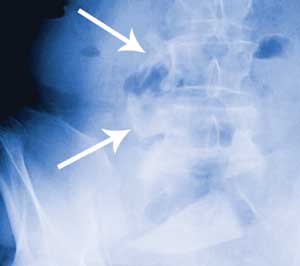 A: A large triangular foreign body is visible in the pelvis. Note the deformity of the right transverse processes of L4 and L5 (arrows). 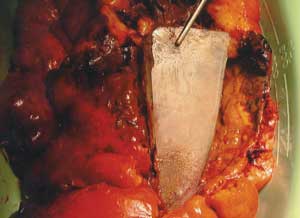 B: The sigmoid colon is opened to show a large triangular glass fragment in the lumen of the bowel. 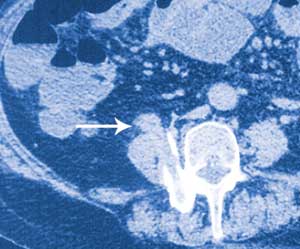 C: A loop of terminal ileum is in continuity with the anterior surface of the right psoas muscle (arrow), directly in line with the bony tract created by the glass fragment.

A 60-year-old woman presented to the emergency department complaining of abdominal pain, nausea and bloating, that had developed over the previous 3 days. On examination, there was generalised guarding and tenderness. A chest radiograph showed a pneumoperitoneum, and an abdominal radiograph showed a large, triangular, radiopaque foreign body within the pelvis (Figure, A).

A diagnosis of bowel perforation by a foreign body was made, although the patient denied any history of foreign body insertion or ingestion. Further questioning revealed that 20 months earlier she had fallen onto a glass coffee table, sustaining a large laceration to the lower back, just above the natal cleft. She had presented to the emergency department of a large metropolitan hospital where the wound was explored and sutured, but no radiographs were taken.

At laparotomy, the patient had faeculent peritonitis, with a small perforation of the antimesenteric wall of the sigmoid colon. An 8.5 cm long triangular fragment of glass was found within the mid sigmoid colon (Figure, B). A Hartmann’s procedure was performed.

Initially, this was a baffling case. The source of the glass foreign body was obviously the earlier coffee table accident — but how did the glass fragment get into the bowel and why did it take 20 months to present clinically with intestinal perforation? The radiographs and subsequent computed tomography (CT) scans provided the answers.

The abdominal radiograph was reviewed the day after clinical presentation and surgery. It was noticed that there was partial bony fusion of the right transverse processes of the fourth and fifth lumbar vertebral bodies. A CT scan confirmed that new bone formation at this level had produced a solid block of bone with a central defect in the shape of a rectangle. It is thought that the glass fragment snapped off deep to the skin and fractured the right transverse processes of L4 and L5, with the subsequent fracture healing process giving rise to a perfect bony cast of the fragment. It is well documented that a fracture initiates a sequence of inflammation, repair and remodelling, and that the remodelling process continues for years.1 Another CT scan showed the bony tract caused by the glass fragment projecting anteriorly into the right psoas muscle. Directly anterior to this, the terminal ileum could be seen lying on the anterior surface of the right psoas muscle (Figure, C). It is thought that the sharp end of the glass fragment gradually worked its way out the front of the psoas muscle and into the terminal ileum.

The radiographs and CT scans provide a vivid account of the course of the glass fragment after it penetrated the skin. All but the most superficial and easily explored penetrating injuries caused by glass should be assessed radiographically at the time of injury.2