Government, industry and the community can work together to reduce price disparities 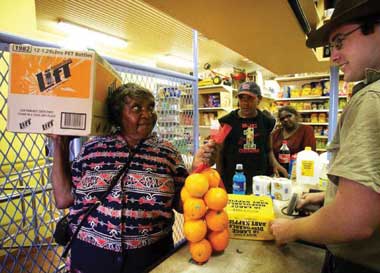 An Aboriginal Health Worker, Marinka Burton, shops at one of the Mai Wiru (good food) stores in the Pitjantjatjara Lands, South Australia. Details of the Mai Wiru program can be found at http://www.nganampahealth.com.au

With the New Year come those grand statements of good intent — to eat less and live longer. But resolving to eat less is a luxury reserved for affluent people. This New Year, most of the world’s population will still be seeking to increase their food supply. This is not a matter irrelevant to Australia: Harrison and colleagues (page 9) remind us that not all Australians have an abundant, affordable and continuous supply of food.1 In their article, they report on a series of surveys — the Healthy Food Access Basket (HFAB) surveys — of selected food stores in Queensland. The surveys showed that, to meet their families’ basic food needs, Australian residents in very remote areas paid an average of about 30% ($114) more each fortnight than people living in cities. The price disparity was greater for basic, healthy food items than for “unhealthy” items such as takeaway food, soft drinks and tobacco. Moreover, at the time of the surveys, fewer of the basic healthy foods were available in remote stores than in city stores.

Remote Australia is home to many Indigenous Australians. They are doubly disadvantaged, paying more for food and other essential goods, and having the lowest incomes of any population group. A detailed study of costs and incomes in a remote Indigenous community in South Australia found that basic living costs consumed up to 85% of family incomes, with food accounting for 35% of the total.2 In contrast, Australians in general spend less than 20% of the family income on food.3 Although remote Indigenous communities obtain their food from various sources, the local store remains the largest supplier of foods.4 Self-sufficiency in food (especially in the face of increasing drought) is not a viable option. Thus, inequitable food pricing is an issue for all remote communities.

The poor health and nutritional status of Indigenous Australians, including extreme rates of obesity, diabetes mellitus, cardiovascular disease and end-stage renal disease, have been amply documented.5 The links between poverty, food insecurity and obesity have recently been outlined by Drewnowski and Specter,6 who argue that poor people all over the world maximise calories per dollar spent. Thus, less expensive, energy-dense foods with high fat and sugar content always win out in the shopping basket over more expensive, less energy-dense foods such as fruit and vegetables. Reducing the disparity between food prices in cities and remote areas would be one way to help Indigenous families make healthier food choices.

Why are food prices higher in remote areas? Investigators have identified several reasons.7,8 Refrigerated road transport for food is expensive, and made more so by the goods and services tax (GST) and rising fuel costs. In addition, in the wet season, some communities rely on air transport for their supplies. Poor business and stock management practices, lack of accountability, and unusual or corrupt behaviour by store managers have meant higher mark-ups in stores. The lack of clear store governance roles and procedures set down by community committees has hindered attempts to improve store management practices. Store expenses, including managers’ salaries (set high to encourage recruitment to remote areas), electricity, shipping, refrigerated storage and stock spoilage costs, are often higher than those incurred by city retailers. Because of the small populations in remote areas, opportunities for achieving economies by bulk-buying from large wholesalers are limited.

What is being done? An impressive array of local initiatives has been described in FoodNorth, a report commissioned by the Western Australian Government on behalf of the “Top End” states and the Northern Territory.7 The report investigated the issues of excessive food costs and limited availability, and documented examples of promising programs from remote Australia that address these problems.

Recently, federal, state and territory agencies have initiated more expansive programs, including the Remote Indigenous Stores and Takeaways project and a new company, Outback Stores, established by Indigenous Business Australia with significant federal funding.9,10 These projects have been established in recognition that remote-area food stores are commercial enterprises (although in many cases community-controlled) and must make a profit to survive. At the same time, those concerned with the health and wellbeing of remote communities argue that remote stores have a social responsibility to supply healthy foods to communities that depend entirely on their stock. These dual, and potentially opposing, objectives of profit and social responsibility present a difficult, but not insurmountable, tension for food retail businesses in remote areas.

Indeed, there have been considerable shifts in recent years in some communities, whose stores are pursuing better business practices for bigger profits, while improving the quality of the produce they sell — for example, by using multiple strategies that outline the roles and responsibilities of the store, the types of foods to be stocked and promoted, and the accountability requirements of managers to reduce store expenses. Improving retail management practices is expected to cut the need for high mark-ups on prices. Some communities are establishing buying groups to enable stores to bulk-buy at wholesale prices. Community stores are developing guidelines and manuals to improve training and industry practice. An example is the Freight improvement tool kit, which is designed to improve the efficiency of cold-chain perish-able food transport to remote areas.11 Schemes to recruit and train Indigenous people in retailing aim to improve the efficiency of store operations as well as providing employment opportunities. Leaders in the retail grocery industry, including Coles and Woolworths, are providing considerable pro bono support. In parallel, local communities are expanding and improving banking services to minimise stores’ financial losses from unofficial loans and credit lines.

What can others do to help and support these heroic efforts? There is no shortage of ideas and plenty of work for us all — food retailers, bankers, food transport companies, land councils, Indigenous-run businesses, employment program managers, governments, health professionals, health-related data collection agencies, and academics. Public–private partnerships, particularly for retail and business training for Indigenous communities, need to be fostered and maintained. Government assistance to minimise GST costs and perhaps subsidise food transport costs is worthy of consideration. Continued support and investment in the current promising initiatives are required, including funding to evaluate programs and ensure they lead to reduced prices of healthy foods in remote areas, as well as other expected benefits such as improved employment rates, incomes and health of remote-dwelling Australians. To this end, several groups have argued for the development and maintenance of a system for routine monitoring of prices of selected foods, and a family food basket, Australia-wide.7,12,13 The HFAB surveys provide a useful model for further development of a national food price monitoring initiative.

This New Year, let us resolve to help solve the problems of Australians living in remote areas who pay higher prices for food than we pay, but whose ability to pay is less than ours. Indeed, let us go beyond a resolution and — through greater citizen action, good business and a modicum of government intervention — assist our remote communities in righting this wrong.