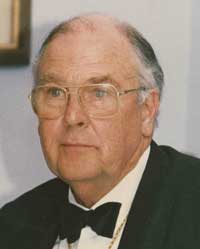 John William Dyer Middleton, general practitioner and colossus of the Australian wine industry, was born in Melbourne on 7 May 1924.

Educated at Geelong Grammar School, John spent several years in the Royal Australian Air Force as a meteorologist before deciding to study medicine at the University of Melbourne. He graduated in 1951 with honours in all subjects, and was awarded the Exhibition and Fulton Scholarship in Obstetrics and Gynaecology and the Wyeth Prize in Clinical Obstetrics. He seemed destined for specialisation, but after 2 years’ residency at the Royal Melbourne Hospital, by which time he had married and had two children, he decided, in 1954, to join his friend Peter McMahon in a burgeoning general practice in semi-rural Lilydale, Victoria.

The same year, John was appointed Shire Medical Officer for Health. His medical excellence saw him much in demand. However, his restless mind gradually led him in another direction. Aware of the Yarra Valley’s successful wine industry of a century earlier, he and McMahon became increasingly involved with viticulture and oenology.

John travelled widely to wine regions in Australia and overseas, and, in 1971, purchased a magnificent farm (“Mount Mary”) overlooking the Yarra Valley and planted appropriate grapes.

John and his wife Marli built and furbished a winery that simulated the operating theatre in organisation and cleanliness, but it was not until the mid 1980s that he gave up medical practice to concentrate full-time on winemaking. In the early years, medical friends acted as pickers on suitable Sunday mornings, arriving with family and friends and afterwards enjoying Marli’s magnificent alfresco lunches.

Physically strong and with notable practical skills, John handled the diverse challenges arising in the winery himself, often using fitting and turning or welding skills learned at school. His wines soon achieved renown and demand exceeded supply. His annual newsletters, with their forthright and quirky views on wine-related matters, were a delight to read.

As well as his interest in wine, John was a keen sailor, and became Commodore of the Eildon Boat Club. He was also a skilled marksman at clay-bird competitions and enjoyed relaxing at home playing the piano.

John kept in touch with many of his medical contemporaries, and his fellow 1951 graduates were delighted when he provided all the wines for their 50-year reunion dinner.

John died on 27 June 2006 from late complications after aortic aneurysm surgery. He is survived by Marli and his three children, Jill, David and Claire. David, a veterinarian, now manages the winery. With the succession at Mount Mary secured, John can rest in peace.