Objective: To assess changes in the cost and availability of a standard basket of healthy food items (the Healthy Food Access Basket [HFAB]) in Queensland over time.

Design and participants: A series of four cross-sectional surveys (in 1998, 2000, 2001 and 2004) describing the cost and availability of foods in the HFAB over time. In the latest survey, 97 Queensland food stores across the five Australian Bureau of Statistics remoteness categories were compared.

Conclusions: Consumers, particularly those in very remote locations, need to pay substantially more for basic healthy foods than they did a few years ago. Higher prices are likely to be a barrier to good health among people of low socioeconomic status and other vulnerable groups. Interventions to make basic healthy food affordable and accessible to all would help reduce the high burden of chronic disease.

Diet quality varies with social status, and this contributes to health in-equalities.1 There is evidence that retail food prices are higher in rural and remote localities than urban areas throughout Australia, and this may have negative nutrition and health consequences.2-8

The 2004 Healthy Food Access Basket (HFAB) survey was the fourth biennial state-wide cross-sectional survey of the costs and availability of a standard basket of basic healthy food items throughout Queensland. The HFAB survey was piloted in north Queensland in 1997 before state-wide surveys were conducted in 1998,9 2000,3 20014 and 2004.10 The 2001 HFAB survey was performed 1 year earlier than the originally scheduled survey date (2002) in order to capture any effect of the new tax system that included the goods and services tax (GST), which commenced on 1 July 2000.

As there is no database of food stores throughout Queensland from which to randomly select a sample, local knowledge was required to identify stores for inclusion in the HFAB surveys. The largest food store in the largest town(s) in each of the 38 Queensland health service districts was selected, in order to reflect prices paid by the majority of the community. Where possible, the same stores were included in 1998 and each successive survey, but for any store that later closed or no longer wished to participate, an alternative store in the same town or a nearby location was included.

Selected stores were categorised by the Australian Bureau of Statistics remoteness structure11 and using the updated Accessibility/Remoteness Index of Australia (ARIA+)12 by populated localities as the basis for the definition of remoteness (see map, page 9). ARIA+ defines localities in terms of remoteness of geographical location as well as access to services.

The range and type of foods included in the HFAB represent commonly available and popular foods selected to provide 70% of the nutritional requirements and 95% of the estimated energy requirements of a “reference family” of six people over a 2-week period (Box 1).13

Basic healthy foods in the HFAB include bread and cereals; fruit, vegetables and legumes; meat and meat alternatives; dairy foods; and limited amounts of some energy-dense foods (margarine, oil and sugar). The quantities of food included in the HFAB are based on model B of the core food groups.13 For comparative purposes, two takeaway foods (190 g meat pie, 375 mL cola beverage) and two tobacco items (50 g tobacco, pack of 25 cigarettes) were also surveyed (they are referred to as “unhealthy” items in our analysis). Information about missing HFAB items was also collected. Only missing items for the total basket from stores surveyed from 2000 to 2004 were compared.

Data were collected on-site by Queensland Health nutritionists and health workers during April and May in 1998, 2000 and 2004. In 2001, the data collection period extended into June.

Stores were not advised of the specific date and time of surveys, so that results reflect usual availability and cost for consumers. Details relating to selection of brands and sizes of food items are described elsewhere.3

The CPI for food is based on a wide range of commonly purchased items (including soft drinks, cakes, biscuits, confectionery, takeaway foods and fast foods), several of which incur the GST. Basic food items (such as those in the HFAB) that are required to support and maintain health are mostly exempt from this tax. All CPI figures, including price data for individual foods used to calculate the CPI, are available for capital cities only.

While the higher price increases for the HFAB in more remote areas raise concern about food access and availability for good health, the overall substantial price increases experienced in all five remoteness categories raise a potential barrier to healthy food access for all Queenslanders. This is particularly the case for people of low socioeconomic status and other vulnerable groups, such as Indigenous people, who are known to suffer a greater burden of ill health than other Australians.16 Higher prices may be a barrier to healthy eating that can compromise nutritional and health status and add to the burden of obesity and chronic disease.17 Earlier studies have identified poor food and health knowledge and undeveloped cooking and budgeting skills as additional barriers to good health.8 Various environmental influences, including food access, contribute to the higher death rates experienced by people from more socioeconomically disadvantaged and remote areas.18

The cost burden is further highlighted by the higher prices paid by the very remote communities located further than 1500 km from Brisbane. Transportation costs, in addition to double handling of produce through secondary wholesalers, contribute to this cost disparity. In addition, retailers are unable to achieve economies of scale due to the relatively small number of consumers and higher overheads.

Our analysis of a small number of unhealthy items suggests that their price is less affected by remoteness than the HFAB items. One explanation may be that these less healthy products are more robust and more profitable, so the extra cost of providing these items in remote locations can be absorbed by the store.

While a number of reports have stated that the effect of the introduction of the GST was mainly captured in the September 2000 quarter,15,19 they do not explain the substantial cost increases for basic food items between 2000 and 2001 — costs that were actually predicted to fall with the introduction of the GST.20 With steady or declining farmers’ prices and little or no impact of drought on retail prices at the time, it has been suggested that other factors, including retailing issues, contributed to these cost increases.21

Despite a “stabilisation” in CPI for food in Brisbane over the financial year 2003–04, the HFAB cost increase has continued to be higher than the CPI for food across all remoteness categories for the 56 stores surveyed from 1998 to 2004 (Box 4). This suggests that the cost for basic foods necessary to achieve good health has become, and continues to be, more expensive than less nutritious alternatives, as included in the basket to calculate the CPI for food. The price gap between healthy and unhealthy foods has also been illustrated in the United States17 and France.22 With price identified as the most important factor in decisions about what food items to buy,23 the health of all Queenslanders may be compromised as a result.

The decline in availability of basic healthy food items with increasing store remoteness (Box 5) also raises concerns for consumers regarding food security and the ability to maintain good health. While the count of available HFAB items fails to discriminate between items not available on the day and those never stocked, time delays in restocking sold-out lines may have an impact on consumer access to healthy foods that could put some individuals at increased nutritional and health risk.

Factors affecting the price, availability and quality of food supply are complex and exist at local, state and national levels. There needs to be an investigation to identify these factors, so that strategies can be developed to improve affordability and access to healthy food for all Queenslanders.

Location and Australian Bureau of Statistics remoteness classifications11,12 for the 97 stores in the 2004 Healthy Food Access Basket survey 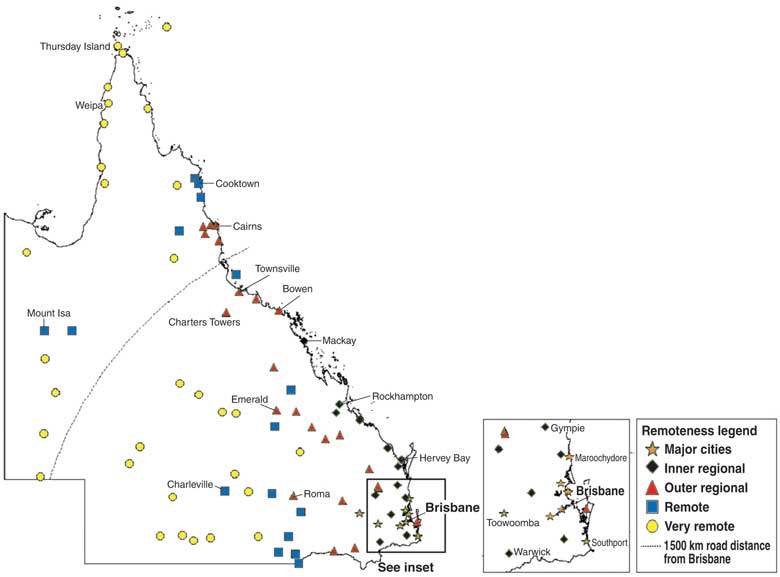 4 Annualised per cent change in costs* (95% CI) in the 56 stores surveyed between 1998 and 2004†‡ compared with the increase in Consumer Price Index (CPI)14 for food in Brisbane over the same period, by remoteness category11,12

5 Number of missing Healthy Food Access Basket items from a total of 44 foods in the 81 stores surveyed between 2000 and 2004,* by remoteness category11,12

Our research was funded by Queensland Health.