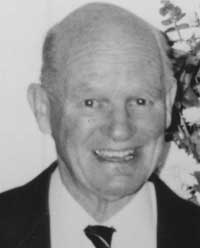 David Henderson was an outstanding physician and teacher who made a significant contribution to medical education in Australia. Born in Gympie on 23 January 1921, he grew up in Queensland.

After graduating from a war-shortened course at the University of Queensland in May 1943, David served his obligatory year as a Resident Medical Officer at Brisbane General Hospital, before joining the Australian Imperial Force. He was sent to Bougainville in August 1945, just as the war was ending. He served during the occupation of Japan until he was discharged from the Army in 1947, when he began training as a physician.

Education at all levels played a central part in David’s life. A generation of doctors remembers him for his patient and provocative teaching. He was Senior Physician at Brisbane Women’s Hospital from 1955 to 1968 and Senior Visiting Physician at the Royal Brisbane Hospital from 1958 to 1981. He was Chief Medical Officer to the Australian Mutual Provident Society in Queensland for some 20 years.

As First Research Fellow at the Queensland Institute of Medical Research (QIMR), David’s complex and detailed retrospective study of lead poisoning, which earned him a Doctorate of Medicine in 1959, is regarded as a “world first”. He later served on the QIMR Council for two decades, and was made a Fellow for his role in developing the Institute.

In 1979, at David’s urging, the Medical Board of Queensland appointed the Thompson Committee to enquire into the future training needs for medical practice in Queensland. His farsighted advice contributed greatly to the Thompson Report. Published in 1981, it was largely this report that led to the radical changes in medical courses in Australia over the past 20 years. His concern with medical education also led him to a seat on the University of Queensland Senate from 1966 to 1974.

In 1984, David and his wife Kay moved to Rockhampton for 2 years while he served as Coordinator of the Central Queensland Continuing Education Committee. The idea was to use information technology to provide information to isolated rural doctors — a potential use of computers that David had long recognised.

David had a great variety of interests. He loved opera, the sporting activities of his children, dismantling and reassembling his Land Rover, and an outdoor life shared with family and friends.

David died of pneumonia on 1 May 2006, after a long illness. He is survived by his wife Kay and children David, Richard and Margaret.