Before my second visit to Australia in 2001, I (J C) asked several colleagues and students if they knew anything about health services in rural Australia. To my surprise, most mentioned the Royal Flying Doctor Service (RFDS). This familiarity can almost solely be attributed to the extensive exposure of the TV series The Flying Doctors in Holland. In the 1990s, the series attracted 2.5 million viewers per week, making it the most popular foreign TV series in Holland at that time. Perhaps this is one reason why Dutch medical students at Maastricht University are interested in medical electives in rural Australia. In this article, we describe the development of a small network of general practice clinics within Australia, which, in collaboration with the Primary Health Care (PHC) working group of Maastricht University in the Netherlands, host and supervise students during their medical elective. Various aspects of the program are outlined, as well as experiences from students and supervisors.

Medical education in Maastricht is practice-oriented. The Faculty of Medicine (Box 1) provides training in all fields of medicine, as well as the initial phase of training for medical research. Maastricht University supports an international orientation, and medical students are encouraged to spend at least one term of their medical course abroad. Most students choose an elective in PHC, and in this quest are encouraged and supervised by the PHC working group of the Department of General Practice at Maastricht Medical School. This group aims to introduce students to patient care, research and education in PHC settings outside the Netherlands. From an active participation in PHC and doing small-scale research, students learn how to deal with limited resources and how to assess socioeconomic and cultural relationships with, and determinants of, health. The philosophy of the group is described in Box 2. During the past 10 years, collaboration with elective sites on all continents has been established (Box 3). One in five students seeking to pursue a PHC elective does so in Australia. All sites within one country or part of a continent are typically coordinated and supervised by one member of the PHC working group, which is responsible for about 30% of all electives abroad by Maastricht medical students.

In the past 5 years, 42 senior medical students (10 men, 32 women) have pursued a PHC elective in Australia. Doctors and coordinators in Broken Hill, Collarenebri, Menindee and Wilcannia in New South Wales; Cherbourg, Gympie, Murgon, Mount Isa and Theodore in Queensland; Carnarvon, Katanning and Kununurra in Western Australia; Mannum in South Australia (Box 4), and Melbourne in Victoria agreed to supervise students during this time. In most cases, initial contacts led to further student placements.

Why do a PHC elective in rural Australia?

Rural areas are different from metropolitan areas, sociologically, culturally, spiritually, and, not surprisingly, in terms of general practice activity. But there are additional explicit reasons why students are motivated to pursue an elective in rural Australia:

Working in a rural setting has several distinct advantages for doctors-to-be. First, they learn how to cope in a situation with limited resources. Australian rural clinics are relatively well equipped, but simple referral is often not possible because of remoteness. Secondly, although students gain experience in all the different specialties during their 2-year rotations in the Netherlands, including their regular 10-week rotation in general practice, the overseas elective is the only remaining opportunity to practise medicine in a broad sense. These facts motivate students to take up an elective in rural Australia. Thirdly, in rural health, general practitioners are often also doctors at the local hospital, and the more remote the area, the more likely a GP is to be regularly engaged in complex and procedural care. In the Dutch health care system, there is a distinct separation between care provided by GPs and hospital care. Thus, general practice in rural Australia offers a wider scale of medical exposure. As a result, students can enhance their practical skills, like suturing (Box 5), taking blood samples, and applying plaster bandages, under the supervision of GPs. This hands-on approach is highly appreciated by students.

Good rural placements for Australian students are scarce, and naturally we do not want to interfere with these arrangements. By sending only a very limited number of students (maximum of 10 nationwide) per year, we avoid competing for placements with Australian medical schools. The University of Sydney Department of Rural Health in Broken Hill has been an excellent partner. Despite increasing numbers of Australian students, they have been able to continue offering some placements to international students. Even so, our students have often worked together with their Australian colleagues, which was welcomed from both sides (Box 6).

Formal academic assessment of the students consists of two major components. First, a formal evaluation with the Australian supervisor takes place, in which clinical performance is assessed, including language ability, relevant knowledge, practical skills and professional behaviour. Secondly, students are obliged to write a report in English, following strict criteria, in which they reflect on their experiences, explore differences between countries and health systems, and elaborate on the specific learning objectives they formulated with the supervisors before commencing their elective. Essential in this report is a dissertation by which the competencies “student as scientist, health care worker and medical expert” are further assessed. Two faculty GPs, one of whom is the faculty supervisor, decide on a final grading. Interesting quotes from these reports can be read in Box 7.

We would like to continue and extend our collaboration, possibly also by research exchange, with Australian primary care clinics and medical schools, and each year provide a small number of students with an excellent bush experience. Future students will be doing a 5–10-week elective in their fourth year as part of their clinical rotations. We will continue to focus on this group, although, after curriculum changes, a new group of final (sixth)-year “junior doctors” may be allowed to spend their 18-week clinical rotation or their 18-week research term abroad, including in rural Australia. Opportunities to combine clinical participation with research in rural Australia might prove worthwhile to explore, although further consideration is needed.

It has been, and still is, a great pleasure to communicate and collaborate with Australian physicians and elective coordinators dedicated to sharing the wonders of rural medicine. GPs and clinics willing to join our small PHC network and have a fourth- or sixth-year Maastricht student in their practice for a few weeks are welcome to contact me (J C).

Remarkably, The Flying Doctors is being shown again on Dutch television in 2006. From clothing and hairstyles, it is obvious that the series was recorded in the 1980s. However, rural Australia as depicted in the series is as authentic as ever. PHC electives in such a unique setting will remain appealing to students for years to come.

“Maastricht medical students increasingly do part of their electives program in foreign developing and developed countries. For most of them, the powerful impressions they gain there result in a lasting fascination with the art and science of medicine as practised in cultures other than their own. They find out that aspects of medicine that are taken for granted in the Netherlands are rarely so in developing countries, where large groups of people live below subsistence level and where access to primary health care is a luxury rather than a basic service. At the same time, they witness encouraging and courageous initiatives being taken by local doctors and nurses who care about the fate of the common people. And they experience what it’s like to examine and treat patients with only a stethoscope and a handful of medicines, or how they must deal with emergencies in remote areas of a country.”

4 A Dutch student at work in Mannum, South Australia 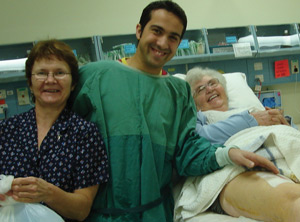 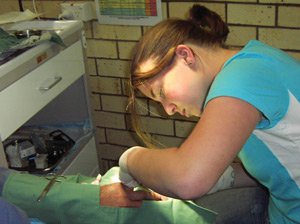 “Over the past 5 years, our practice has hosted medical students from Maastricht University. They have spent most of their time in our practice, participating in consultations, skin clinics, operating sessions, obstetrics, suturing wounds and some emergency medicine. But we have tried to give them other experiences during their time here, collaborating with practices in Murgon, Cherbourg and Theodore. All doctors involved in supervising these students have been very impressed by their knowledge and enthusiasm. Their English has been excellent, and they have been a delight to teach. The students have been accommodated with Australian medical students. This has been a rewarding experience and a good social contact for both Australian and Dutch students. I think we have all been surprised by how well they have fitted into our way of life and adapted to the Australian sense of humour. We have been interested to learn about their medical system and selection process for medical school, which is mainly based on a lottery system, weighted by students’ high-school grades.

“On a lighter note, none of the students have liked Vegemite. We all enjoy their chocolate sprinkles (much easier to remember than the Dutch name) and the Dutch salty liquorice is awful.”

“Overall, we have all been very impressed by the quality of all the students, their good language and personal communication skills, and overall good sense of humour. I think they have all appreciated the more laid-back style that seems to be typical of Australia, particularly in the rural areas. They have all coped with the Australian slang words we use; I feel ‘crappy’, ‘groggy’ and ‘I’ve got a wog’ are phrases that have at times stumped them. We found an Australian slang dictionary to show the students ‘our other language’, which they found both amusing and also useful. We feel that the intermingling of students from different cultures and universities in our practice makes for a better ‘learning and sharing’ experience. It’s a great way to show students that evidence-based learning should be international.”

7 Students’ opinions about their placement

“It’s stunning to see that, despite remote locations and limited manpower, everybody works very hard to guarantee sustainable medical aid for all inhabitants.”

“Being in the bush certainly makes you realise that some facilities are not as normal as I was always thinking. Suddenly it’s just you and the patient.”

“Quite remarkably, some patients seem to collect a number of physical complaints before consulting their GP, making the long drive to the doctor more efficient.”

“Patients found it hard to believe that 16 million Dutch people are living in a country smaller than Tasmania.”

“The cross-cultural workshop in Broken Hill was an eye opener. It didn’t just provide me with an extensive view on Indigenous culture and health-related communication, it also made me realise that this might prove extremely useful back home, as we’re also living in a melting pot of cultures.”

The authors and the PHC working group would like to thank all Australian clinics, doctors, health workers and nurses who have contributed to the excellent learning and personal experiences of our students. Furthermore, we are very grateful for the cooperation of Marion Aarts and Astrid Peters of the Office of International Relations of Maastricht University.