At 7:30 pm on Wednesday, 1 October 1823, “upwards of four hundred students” were “crowded in every part” of the lecture theatre in St Thomas’ Hospital, London, for the first of a series of lectures on surgery by Sir Astley Cooper (Box), then the pre-eminent London surgeon.4 The lectures are preserved because “Thomas Wakely shrewdly chose Cooper’s lectures to reproduce in the first issues of his new journal, The Lancet.”1 In his first lecture, Cooper discussed the attributes of successful surgeons and the “principles and practices” of surgery. Much of his discussion remains pertinent in 2006.

In the early 19th century, an array of English, Scottish and Irish colleges, universities and guilds awarded medical qualifications. The content of their courses and requirements for practical experience varied widely. A few students who came to hear Cooper may have been apprenticed to leading London surgeons, living in the surgeons’ homes and paying substantial annual fees for the privilege. They possibly aspired to be full-time surgeons in London or other cities. Most would have already attained a medical degree from one of the Scottish universities or spent some years apprenticed to an apothecary. These students would pay lesser fees to hospitals for a year or two to “walk the wards” before taking up careers as general practitioners. During their attachment to the hospital many would also undertake a course at a private anatomy school.5 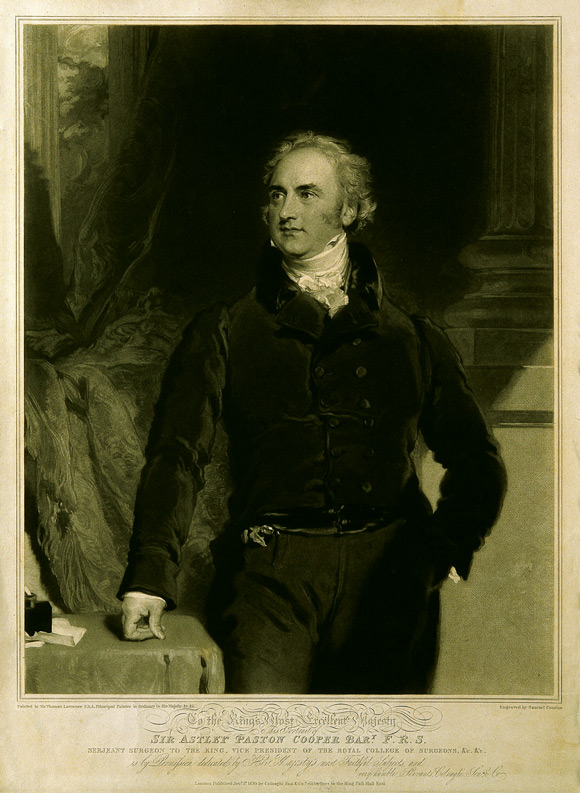 Sir Astley Cooper (1768–1841), the son of a Norfolk clergyman, was apprenticed to London surgeons from age 16, first at Guy’s Hospital and later at St Thomas’. In 1800, he was elected surgeon to Guy’s Hospital. Cooper “attracted a large number of wealthy and influential patients, including Lord Liverpool, the Duke of York, the Duke of Wellington and the Prince of Wales, who, as George IV, created him baronet in 1821 following the successful removal of a painful cyst from the king’s scalp”.1 He earned an enormous income from private practice which “in his peak years exceeded £20,000”.1 By comparison, in 1825, The Lancet advertised for sale a “medical practice in a populous village in the neighbourhood of London” with “receipts from £400 to £500 per annum”.2 Jane Austen’s Pride and prejudice was published in 1813, and her famous Mr Darcy, with his “large estate in Derbyshire”, had “ten thousand a year”.3

Cooper was speaking before the development of anaesthesia — it was no minor matter for a person to subject themselves to a surgical procedure. The students were advised that “many essential qualities are requisite on the part of the surgeon”.4 The first was “neatness in the application of his remedies; awkwardness in this respect will frequently injure his professional prospect”. The quality “which is considered the highest order in surgical operations is self-possession; the head must always direct the hand . . . without this quality a man may do well enough in ordinary cases, but can do little in sudden emergencies”. Also essential was “gentleness of manner; patients having a natural dislike to operations feel still more uneasy if they discover anything in their practitioner’s behaviour which makes them apprehend rough treatment”, and the students were advised that “patients generally form an opinion of a surgeon’s ability by his manner: if he be of a dry, morose turn, he is apt to alarm not only the patient but his whole family; whereas, he who speaks kindly to them, and asks for particular information, is supposed to have more knowledge and receives more respect”.4 Our modern medical educators were not the first to appreciate the importance of effective communication between doctors and patients.

There was debate in Australia during 2006 about the value of formal systematic teaching of anatomy. Cooper had no doubts: “operations cannot be safely undertaken by any man, unless he possess a through knowledge of anatomy. This is the real groundwork of all surgical science; and it has ever been found that half-anatomists are bungling practitioners”. Cooper stressed that “ana-tomy likewise teaches us how to discriminate disease in which lies more than half the cure” and he told of litigation that followed a colleague’s failure to diagnose a dislocated shoulder which was then diagnosed and reduced by another practitioner. The colleague told Cooper: “When the man recovered he bought an action against me, I had to pay two hundred pounds damages and the law expenses were two hundred more. The loss of money I did not feel, but I have severely felt being pointed at as an ignorant man.” In another case, a poor knowledge of anatomy caused what modern quality zealots would call an “adverse event”. An artery “that lay under the vein” was severed in a man undergoing the straightforward procedure of “bleeding”. A surgeon had to “cut down upon the artery and secure it”, but “inflammation and mortification came on, and death soon followed”.4

Cooper discussed medical as opposed to surgical practice. Physicians were typically from the higher social classes and educated at Oxford or Cambridge. One historian notes: “The legitimate sphere of practice of the physician revolved around the twin tasks of diagnosing internal disease, and of prescribing an appropriate remedy; what was regarded as the manual work involved in surgical procedures and in the dispensing of medicines was to be left to the lower orders of the profession.”5 However, these traditional demarcations between physicians, surgeons and apothecaries were breaking down in early 19th century England. Apothecaries had moved beyond simply dispensing medicines and were providing the expanding middle classes with a spectrum of services. They now prescribed as well as dispensed medications, performed surgical procedures, provided obstetric services, and were adopting the newer title of “general practitioner”. Surgeons had also moved beyond merely undertaking manual tasks, and engaged in a broad spectrum of activity. “The system of ‘orders’ was breaking down as part of a general decay of guild control over occupations.”6

Cooper certainly showed no deference towards physicians: “a mere physician cannot be a good judge of surgical cases; and notwithstanding my respect for the physicians of Guy’s Hospital, I would not hold my situation in that establishment, unless I had the right of prescribing for my surgical patients”. Students must understand that “the study of medicine is important to the surgeon; he should be able to prescribe with certainty — should well understand the great influence of local disease on the constitution, as well as the origin of local disease from constitutional derangement”. Cooper related how, without his knowledge, a physician had visited one of his patients and “ordered a cathartic, which, acting rather violently, disturbed him so much that fatal consequences ensued”.

Physicians often assessed, diagnosed and treated patients according to theories associated with imbalances between “the four humours — blood, yellow bile, black bile and phlegm”, which “proved wonderfully versatile as an explanatory system”.7 By contrast, Cooper’s approach and language would appeal to our modern evidence-based medicine advocates. He advised the students that “in the surgical science, hypothesis should be discarded and sound theory derived from actual observation and experience . . . experiments on living animals have been found of the greatest utility in directing us to a knowledge of the means by which Nature acts in the reparation of injuries . . .” As well, “physiological knowledge is of the utmost importance to the profession of surgery . . . a knowledge of the healthy functions enables you to better understand the nature of diseased action. This was the rock on which Hunter stood, admired by the wise, and abused by the ignorant, indefatigable in his research he omitted no opportunity of exploding false theories”.4

Cooper also offered the students more general advice: “I strongly recommend punctuality in attendance at lectures, and at dissections and at hospital practice”, and he “particularly requested the young students . . . not to lose their precious time in idle and vain amusements . . .” although (apparently some things never change) he conceded, “some will be fluttering in the boxes of another theatre, or come here only to interrupt their more steady fellows”. He advised that “well directed assiduity will surmount all difficulties . . . reading will be found extremely useful . . . and I recommend to you the practice of taking notes, but not hasty ones”. In concluding, Cooper offered: “that if any of you wish to ask my advice or assistance in any way, I shall be most happy if you will call on me whenever you think proper. I do not say this from ostentation, but always wish to show the junior members of the profession that I do not forget the friendship I have experienced from their fathers”.

Does Cooper’s 1823 lecture offer anything beyond antiquarian interest? It suggests the beginnings of a system of medical education familiar to today’s older doctors. He was speaking at a time when the ancient medical guild structure had proved inadequate, resisting rather than adapting to the needs of the emerging industrial society. Later in the 19th century, new professional structures evolved in England to meet the needs of a different world. The British Medical Act of 1858, “reflecting further movement towards professional unification and standardisation of training”, established the General Medical Council.8 The British Medical Association, founded in 1832 (as the Provincial Medical and Surgical Association), sought to bring all doctors into one representative organisation.8 The ancient colleges eventually focused on specialist training in the large city hospitals. 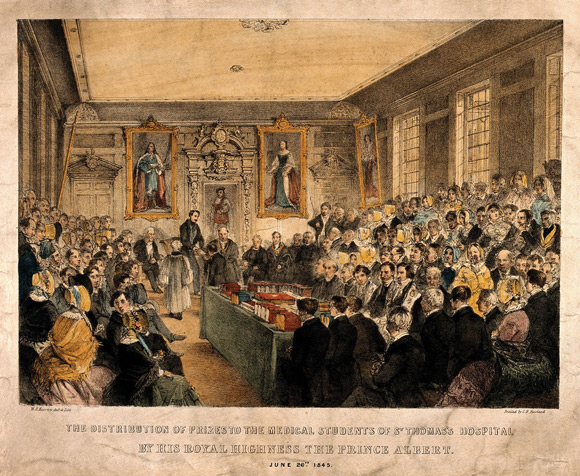 The organisation and regulation of medical practice in Australia mirrored many of these developments. In 2006, it is interesting to speculate on whether the continuing proliferation of regulatory bodies, educational organisations and representative associations is providing the medical profession with an effective institutional framework, appropriately configured and resourced to meet contemporary challenges such as the “globalisation” of the profession, burgeoning technical possibilities and medical specialties, the “corporatisation” of some professional activities, the shift of some education and training out of traditional teaching hospitals, and demands for more public accountability. Or is it again time for some fundamental realignment of roles, and consolidation of resources and functions? Cooper’s lecture also suggests that, whatever the supporting institutional structures, important principles underpin competent, caring professional practice.