A 41-year-old man presented with a 3-week history of watery diarrhoea (four to five bowel motions per day) and central abdominal pain. Two days prior, he had passed blood per rectum, for which his general practitioner had prescribed oral metronidazole without any effect. He had no nausea, vomiting, fevers or sweats.

Abdominal examination was unremarkable, and he was afebrile. Blood tests showed 20% eosinophilia (1.6 × 109/L; normal range, 0–0.5 × 109/L), but were otherwise unremarkable. The result of two faecal examinations showed watery stool with occasional leukocytes, but no erythrocytes. Enzyme-linked immunosorbent assay (ELISA) for Clostridium difficile toxins A/B and immunoassay for Cryptosporidium and Giardia were negative. In accordance with local laboratory protocol, microscopy to determine faecal concentration of eggs, cysts and parasite was not performed, as there was no history of overseas travel.

Colonoscopy revealed mild terminal ileitis. Biopsies of the affected area showed an eosinophilic infiltrate in the lamina propria and submucosa, but intact surface epithelium. Occasional adult worms measuring about 70 μm wide at the midbody were seen on the luminal surface (Box 1A and B), and were initially identified as Enterobius vermicularis. He was treated with two 100 mg doses of mebendazole 1 week apart. However, he re-presented 3 weeks later with no improvement in his symptoms and a persistent eosinophilia (1.4 × 109/L).

On this occasion, faecal concentration was performed using formalin-ethyl acetate, and parasite eggs were detected on iodine wet mount (Box 1C). These were initially misidentified as hookworm eggs, but subsequent review confirmed that they were eggs of Trichostrongylus sp. The parasites seen on terminal ileal biopsy were also reviewed. Their morphology and dimensions (70 μm-wide body) were found to be consistent with adult Trichostrongylus.1

Further questioning revealed that the patient kept goats in a shed in his backyard in suburban Sydney. The goat manure was used as fertiliser on a nearby vegetable patch which supplied food for the household.

The patient was treated with a single 13.5 mg dose of ivermectin, and his symptoms resolved. He remained symptom-free 3 months later.

A 42-year-old vegetarian man presented with a 5-week history of severe cramping upper abdominal pain, nausea and diarrhoea. He had no fever, cough, wheeze, rash or weight loss. He had holidayed in Morocco and Spain 6 months previously. Examination showed epigastric tenderness. His blood tests showed eosinophilia of 11.0 × 109/L, peaking 11 days later at 27.7 × 109/L; his blood film was otherwise normal. There were no abnormalities on plain x-rays or computed tomography scans of the chest and abdomen.

A bone marrow biopsy showed a marked eosinophilia (40%–60%), but was normocellular with a normal karyotype on cytogenetic analysis. Endoscopy showed small duodenal erosions. Biopsies of the duodenum, ileum and colon showed an inflammatory cell infiltrate, including plentiful eosinophils (Box 2). Repeated stool specimens yielded only Blastocystis hominis cysts, not considered relevant to the clinical setting. A terminal urine specimen revealed no schistosome eggs, and serological tests for Strongyloides, Fasciola and Schistosoma were negative.

The patient revealed that 4 weeks before symptom onset, he had taken care of a pet goat at his house, and had used fresh goat manure as fertiliser for his lettuce and other vegetable seedlings. He ate the garden produce raw and unwashed. A sample of the goat faeces was obtained from the garden for examination (fresh samples were unavailable). Baerman isolation and iodine fixation of the goat stool showed larvae of various stages, including rhabditiform larvae (probably from soil contamination) and ensheathed larvae (presumed to have hatched from eggs which would have been present in a fresh specimen). A Trichostrongylus colubriformis larva is shown in Box 3.

Since exhaustive investigation had failed to yield an alternative diagnosis, trichostrongylosis was diagnosed on the basis of this strong circumstantial evidence. The patient was subsequently treated with 15 mg of ivermectin as a single dose 24 days after his hospital admission. Within 2 days, his condition had improved dramatically, and his eosinophil count fell from 18 × 109/L to 3 × 109/L. He remained well thereafter.

Trichostrongylus species are zoonotic nematode parasites, ubiquitous among herbivorous mammals worldwide. Human infection is most common in herders of sheep and goats, but may potentially be acquired from contact with faeces of other infected host animals such as cattle, camels and donkeys.2 Isolated cases or small series in humans have long been recognised in Australia: 60 cases were reported from Queensland by the Hookworm Campaign between 1923 and 1928, and more recently, five cases were detected out of 46 000 stool examinations at a Queensland laboratory between 1992 and 1995.3-7 Human prevalence data are difficult to acquire because misclassification is common, and symptoms may be mild or non-existent. Trichostrongylus eggs are most commonly mistaken for hookworm eggs, which have a similar shape, although the former are larger (73–94 × 40–53 μm), and slightly pointed at one or both ends (Box 3).2 Misidentification occurred twice in Patient 1; eggs were initially identified as those of hookworm, and adult worms seen on endoscopic biopsy as Enterobius vermicularis. Diagnostic difficulties also arise because of the long prepatent period. Even after the period of maturation from larval stage to egg-laying adults, passage of eggs may still be scanty or undetectable for some time (with reported delays of 4 months to 2 years between symptom onset and detection of eggs2,5). This probably explains the absence of detectable eggs in the stool specimens of Patient 2.

When a documented travel history is not provided, stool immunoassays for Giardia and/or Cryptosporidium are now being used in many laboratories instead of the more labour-intensive traditional microscopic examination for parasites. This approach will miss a number of locally-acquired parasitic infections such as hookworm, Trichuris trichiura, Strongyloides stercoralis, Isospora belli, Fasciola hepatica and Brachylaima cribbi as well as Trichostrongylus sp. Practitioners should familiarise themselves with the methods used by their local laboratory for stool parasite examination, and request that faecal concentration and microscopy for parasites be performed, not only after travel, but also if there is a history of close contact with herbivores, or consumption of unwashed home-grown vegetables fertilised with herbivore droppings. Trichostrongylus infection can also be laboratory-acquired,3 in some cases through mouth-pipetting techniques (N C S, unpublished data).

Adult Trichostrongylus parasites residing in the gut of an infected host produce eggs which hatch in faeces to produce larvae. Such larvae (Box 3) are difficult to distinguish from those of another parasitic genus infecting goats, Ostertagia (an organism which is non-pathogenic to humans), and may be difficult for anyone other than a trained parasitologist to distinguish from larval forms of hookworm or Strongyloides. Identification of these parasite species is usually based on features of the adult worm. The larvae pass through two free-living stages to become infective third-stage larvae. These larvae are motile and migrate to vegetation and are ingested when the vegetation is eaten. The third-stage larvae then exsheath and move to the duodenal mucosa, mature into adult worms over about 25 days, and live among the intestinal villi and mucus. Patients may be asymptomatic, with eosinophilia only noted incidentally. When symptoms are present, they are confined to the gastrointestinal tract, as there is no migratory phase. A high worm burden can lead to marked eosinophilia, desquamation of gut mucosa, and severe symptoms including epigastric pain and diarrhoea.2 The per rectum bleeding noted in Patient 1 is likely to have been a direct result of mucosal inflammation and trauma caused by adult worms attaching to intestinal epithelium.

Our patients’ cases illustrate the value of a collaborative approach between medical and veterinary practitioners. Medical and veterinary parasitologists were able to facilitate diagnosis and recommend appropriate treatment (ivermectin 200 μg/kg given as a single dose), based on knowledge of resistance patterns of Trichostrongylus sp. in herbivores. Resistance to benzimidazoles is now common because of the widespread use of this anthelmintic class in grazing animals.8 The treatment failure with mebendazole in Patient 1, and initial partial response to albendazole in Patient 2, followed by complete response to ivermectin, is consistent with the efficacy of these anthelmintic agents against Trichostrongylus sp. in sheep and goat populations in Australia. Resistance to pyrantel would also be anticipated, and resistance to ivermectin is emerging.9

Human trichostrongylosis is a locally acquirable cause of eosinophilia, gastrointestinal symptoms, or both, which should be suspected and appropriately investigated in patients with a history of contact with herbivorous animals. 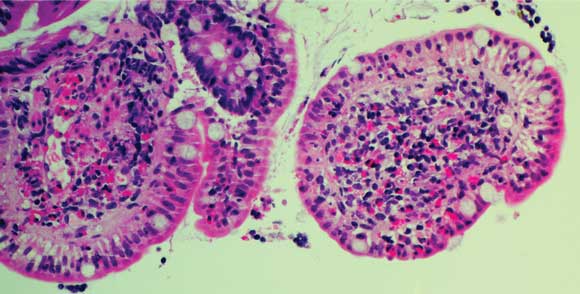 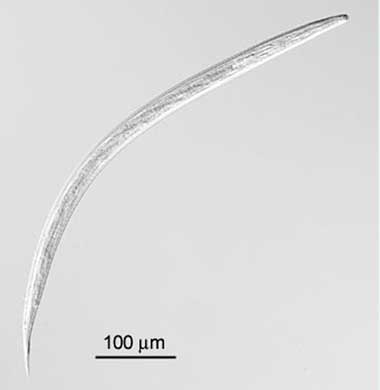