A 41-year-old man was referred for open biopsy of a 3 cm left lung lesion. The lesion had been discovered incidentally on chest x-ray (Box, A) and investigated with a computed tomography scan of the chest (Box, B) and a fine needle aspiration biopsy under radiological guidance that was inconclusive.

The patient had a history of smoking and had also sustained a ruptured left diaphragm and a pulped spleen (with subsequent splenectomy) in a motor vehicle accident 13 years previously.

A left thoracotomy was performed and the mass removed. During surgery, the mass was noted to be closely applied to the left phrenic nerve and apparently deriving blood supply from the phrenic pedicle. A smaller mass was discovered posteriorly, adjacent to the descending aorta.

Histological examination of the mass revealed encapsulated lymphoid tissue, with lymphoid foci surrounding central hyalinised vessels. The lymphoid foci were separated by a broad region of erythrocyte-filled sinuses. The appearances were of splenic tissue and there was no evidence of malignancy (Box, C).

Thoracic splenosis is a rare condition in which ectopic splenic tissue exists in the thoracic cavity, more commonly on the left side.1 It occurs in some patients who have experienced thoraco-abdominal trauma with resulting splenic and diaphragmatic injury. Fragments of splenic tissue implant themselves within the thorax and derive a blood supply.2 Often this occurs at multiple sites within the thorax and abdomen. These ectopic spleens remove aged and abnormal red blood cells from the circulation. So, despite having had a splenectomy, a patient with this condition may have normal red cell morphology on blood smears.

Nuclear medicine studies with either 99mTc sulphur colloid, 111I-labelled platelets or 99mTc heat-damaged erythrocytes demonstrate an increased uptake of the radioactive isotope in ectopic splenic tissue. The 99mTc heat-damaged erythrocyte study is more specific because of reduced uptake of 99mTc in otherwise normal liver tissue.3 When a localised area of uptake corresponding to the mass is detected — supporting the diagnosis of thoracic splenosis — no further treatment is required.1-3 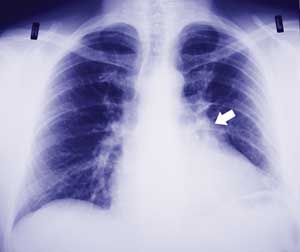 A: Chest x-ray showing the incidental finding of a left hilar mass (arrow). 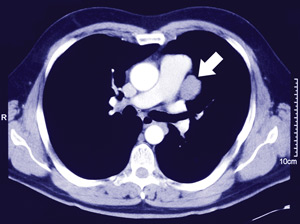 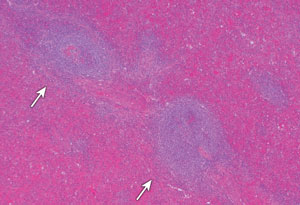