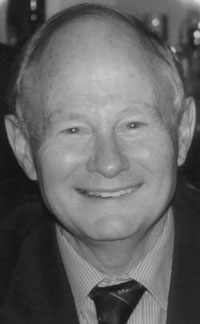 John Colvin made an outstanding contribution to ophthalmology in Australia. He also (with the technical assistance of spectacle maker Martin Hogan) played a role in the successful US Apollo space flights and extended the flying time of Royal Australian Air Force (RAAF) and civilian airline pilots.

Born on 14 January 1929 in Hobart, John was educated mainly in Queensland. After graduating in medicine at the University of Queensland in 1953, he spent 5 years in England training in ophthalmology, spending part of that time at the Leeds General Infirmary. Returning to Melbourne in 1961, he entered private practice and was appointed to the honorary staff of the Royal Victorian Eye and Ear Hospital. On Saturday mornings at the hospital he gave free lectures to medical students (whose attendance was voluntary). He estimated that, over a period of 37 years, he gave 1000 lectures to 12 000 students. In recognition of this unique service, the hospital’s management committee named the John Colvin Clinical School in his honour.

John joined the University of Queensland Air Squadron in 1950 and gained a pilot’s licence in 1954. As an RAAF reservist, John became consultant ophthalmologist to the RAAF, serving for 45 years and reaching the rank of group captain. He designed spectacles that allowed presbyopic Air Force and airline pilots to read instruments above their line of sight, thus enabling them to continue to meet visual standards. He also designed spectacles with polycarbonate lenses that could withstand high gravitational forces, as well as an anti-glare docking aid, that were adopted by the US National Aeronautics and Space Administration (NASA) for its astronauts. He was invited to be a keynote speaker at an aerospace conference in Las Vegas, and visited NASA at Cape Kennedy.

For 25 years, John gave honorary service to Royal Flying Doctor Service clinics from Broken Hill to the Queensland border. A dedicated teacher, he lectured to the Royal Australian College of General Practitioners, the College of Pharmacy, the Mobile Intensive Care Ambulance Service, and dental and nursing students. He was also a visiting speaker in New Zealand, Fiji, New Guinea and Vietnam, where he advised Air Vietnam on the selection of pilots. His pamphlet “Golden eye rules” was distributed to hospitals and general practices, and was translated into many languages. His article “Effective management of penetrating eye injuries in remote Australia”1 became the basis of standard practice.

In his spare time, John enjoyed watching football. He was a supporter of the Hawthorn Football Club and its honorary ophthalmologist, and received the Club’s Service Award.

Disabled by a stroke in 1995, John died on 7 August 2005 after a long period of failing health. He is survived by his wife Sylvia and their three children, David, Alan and Andrea.