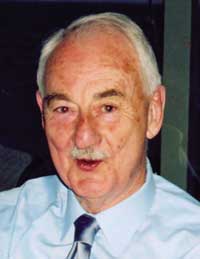 William Heath was born on 23 July 1925 in Casterton, western Victoria. The eldest of seven children, he was educated by the nuns at the Convent of Mercy School in Casterton. Bill’s father died when he was 14, so at the age of 15 he commenced work as a clerk with the AMP Society, a relationship which continued throughout his life and culminated in the position of Chief Medical Officer of the AMP Society.

At the age of 18, Bill joined the Royal Australian Air Force and trained as a pilot. After the war, he returned to AMP for a year before commencing a medical degree at the University of Melbourne. After graduating with honours in 1953, he completed his training at St Vincent’s Hospital, Melbourne.

Awarded a National Heart Foundation Travelling Scholarship in 1961, Bill took his young family to the United States to work as a cardiovascular research fellow at Georgetown University in Washington, DC, from 1962 to 1964.

Bill then returned to Melbourne and quickly established an extensive private practice in Collins Street. He was much sought after as a clinician, teacher and source of expert medicolegal opinion. He held many board appointments, including Medical Director of the Mercy Hospital, Chief Medical Officer at Munich Reinsurance Company, and Treasurer and Secretary of the Medical Defence Association of Victoria.

Bill was Honorary Physician to Pope John Paul II, Queen Elizabeth II, the Duke of Kent, the Prince and Princess of Wales, and the Queen of Denmark and Prince Consort, during their respective visits to Victoria.

A deeply religious and compassionate man, Bill worked tirelessly caring for the less fortunate in our community, looking after alcoholics, drug addicts, homeless people and many others. A man of great good humour, Bill held very definite and firm opinions about most matters and had a very select list of dislikes (with parking attendants and Mexican waves being near the top of the list).

Bill was a keen traveller, a lover of good food and wine, and an enthusiastic supporter of various clubs, including the Essendon Football Club, the Melbourne Cricket Club and the Kooyong Lawn Tennis Club.

His last 2 years were blighted by a very aggressive lymphoma, involving recurrent visits to hospital and the traumas of chemotherapy and septicaemia. He died on 22 October 2005.

Bill will be remembered as an eminent cardiologist, a very fine doctor and a true gentleman. He is survived by his wife Ann and children Jane, Simon, Susan, John, David and Sarah.