Cancer control is a National Health Priority Area in Australia. While it may not be possible to eliminate cancer altogether, its impact on the community can be significantly reduced. Skin cancer can be reduced by effective preventive measures, including shade structures to reduce exposure to the sun’s ultraviolet (UV) radiation.

Environments with insufficient shade place great demands on individuals to protect themselves from the sun.1 It is not often appreciated that people sheltering under trees or shade structures are exposed to a considerable amount of scattered UV radiation.2-6 While direct UV radiation from the sun is generally reflected or absorbed by the shade structure, the scattered component is still present in the shade. Exposure to this scattered radiation increases the risk of short-term and long-term conditions, such as erythema, cataracts and skin cancer.

Interventions that improve sun-protection conditions for all people in a defined population (childcare centre, school, sporting group, life-saving service and workplace, and community settings such as sports grounds, parks and outdoor entertainment areas), not just for those who are most motivated. Strategies include increasing shade, supplying sunscreen, and adopting policy, guidelines and legislation that involve formal rules or standards, legal requirements or restrictions relating to skin cancer protection measures.7

Many recommendations of the NCPP are directed at promoting sun protection. One goal is to increase the amount of natural or constructed shade in public places.7

What is effective shade?

1 A traditional shade structure in Queensland 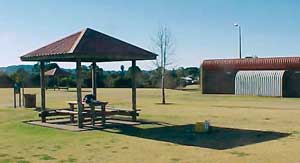 The shade provided by the structure is not over the table and seats.

Research into UV exposures beneath shade structures during winter showed that UV levels in the shade at a subtropical site were still high enough to cause mild sunburn when used during the middle of the day.4 At subtropical latitudes, shade structures need to be used in all seasons to protect people from dangerous levels of UV radiation. People will generally seek shade in summer because it is hot, but in winter will avoid the shade if it is not warm. Effective shade structures need to offer adequate thermal comfort for different weather conditions and seasons.8 Otherwise, winter shade will not be used when needed.

The positioning of the shade structure with respect to outdoor activities is of key importance, particularly for infants and children, as UV exposures in infancy and childhood are more dangerous than exposures later in life.9-11 Although melanoma is generally a disease of adulthood, research has shown that children in Queensland, Australia, had the highest incidence rates of melanoma in the world.12 Appropriate positioning and the addition of suitable side-on protection, such as vegetation and/or polycarbonate sheeting can significantly reduce scattered UV light in the shade by about 89%.6

Ultraviolet radiation in the shade

Quantitative studies of solar UV radiation beneath various forms of shade have been conducted over many years.3,4,13-23 Many studies have found that tree shade does not offer adequate UV protection.2,14,18,19,23 We have found that, during autumn and winter, biologically damaging UV radiation present beneath a shade umbrella was up to 84% of that in full sun.3 Gies and MacKay found that only six of 29 shade structures in New Zealand primary schools offered an ultraviolet protection factor (UPF) greater than 15 (equivalent to a 93% reduction in incident UV radiation).24

Problems with shade design and creation

General guidelines exist for the provision of shade.8,25-27 The primary concern with these guidelines is that they are not based on adequate quantitative research into UV radiation and its interaction with different shade environments under different conditions. New and more extensive research has recently been conducted quantifying UV in different shade environments.3-6,24 A number of these guidelines make the point that the design and construction of shade structures requires considerable technical expertise.28

Shade creation guidelines such as Under Cover8 state that using deciduous trees to create shade is an appropriate option for allowing warmth and light into the play area during winter. However, this is inappropriate guidance, as solar UV radiation at subtropical and lower latitudes in Queensland can still be hazardous during winter.29 Wide-spreading, dense-canopied evergreen trees would be a far more appropriate way of providing natural shade.

Another concern is that the guidelines often seem to give priority to the aesthetic appeal of shade structures rather than their effectiveness. The Under Cover guidelines advocate using shade sails as a means of providing an aesthetically pleasing shade environment for areas where children play, such as early childhood centres, schools and beach areas. However, the Queensland Cancer Fund states on its website that “. . . open spaces exist between the sails which allow a lot of UVR through. Shade sails are often an expensive option and do not adequately cast shade over the desired area”.30 The Under Cover guidelines also state that shade sail designs seem to attract the most vandalism. This begs the question: why use shade sails at all? At present, there are no plans for reviewing the Under Cover guidelines.

Currently, the design and creation of shade structures seems to be limited by a number of factors that include cost, safety and council building requirements. Cost is a major concern, as most schools and child care centres cannot afford large complex structures that would provide better UV protection. Instead, these organisations erect smaller, less efficient shade structures. Queensland standard building regulations have a 10 m2 limit before a building permit is required.31 A simple 10 m2 shade sail costing $500 would triple in price if one extra square metre were added, because this would necessitate a building permit.

Safety regulations also affect the design of shade structures. For example, most regulations specify that shade structures must be 1.5 m from any play equipment, fence, or tree and have an entry height of no less than 2.2 m. Conforming structures may not cast adequate shade at all times of the day. A reassessment of building guidelines may be necessary to allow more protective shade environments. However, the extent to which council regulations need to be changed requires input from those groups needing the most effective shade, such as schools and child care centres.

When designing and constructing a shade structure, the entire shade environment needs to be carefully considered (Box 3). Shade guidelines should be based on recent scientific research. Governments can help local communities with more funding for and better access to shade-creation grants. Building regulations for groups such as child care centres and schools may need to be relaxed or revised to permit economical construction of effective shade structures. Ongoing public education that targets specific groups and settings may lead to the adoption of more appropriate protective shade environments.