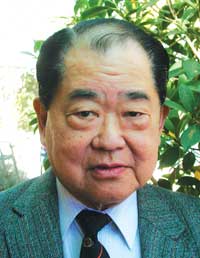 An ophthalmologist who made an enormous contribution to improving eye care in Central Australia, Wilfred Win Law died suddenly on 11 October 2005 as the result of a stroke.

Wilfred was born on 11 June 1930 in Rangoon, Burma. He graduated from Rangoon University in 1955, after which he received postgraduate training in ophthalmology in London. After working at the Royal Victorian Eye and Ear Hospital, Melbourne, in 1977, he spent 6 years in Hong Kong before moving to Alice Springs in 1984 to take up the position of Senior Specialist Ophthalmologist at Alice Springs Hospital. For the next 21 years, until his death, he devoted himself to establishing a sustainable eye care service in Central Australia — a service that was badly needed.

Through his considerable energy and dogged persistence, Wilfred built up a substantial ophthalmology service based in Alice Springs. Recognising the paramount need to achieve a sustainable pattern of activity, he committed himself to stay for the long term. He realised that a resident specialist would always be able to achieve more than a visitor. He also recognised the value of teaching and training the next generation. Like all good teachers, he was a generous man, prepared to pass on in a few minutes something that he may have taken decades to learn.

He also had a well developed sense of responsibility. This he attributed to his traditional oriental upbringing. He felt he was fortunate to have been given the talent to study medicine and the opportunity to do so. In recognition of this privilege, he chose to practise medicine for as long as he could do it well — and he did, until the day he died.

Wilfred taught not by preaching but by example. If he was consulted by junior emergency staff, even in the middle of the night (as was often the case), he was always prepared to attend the hospital — replete in coat and tie. The junior staff loved him for his generosity, wisdom and after-hours support. To them he was more a mentor than a clinical supervisor.

Wilfred is survived by his wife Elizabeth, children Justus and Maria, and two much-loved grandchildren.