Born at Bombala, NSW, on 22 December 1912, Geoff was the son of a general practitioner. After early schooling in Kempsey, he attended The Armidale School and Sydney Grammar School. He graduated in medicine from the University of Sydney in 1936, and was appointed to Sydney Hospital as a Resident Medical Officer. He married Claire Probert in secret, the hospital appointment being then unavailable to a married man. 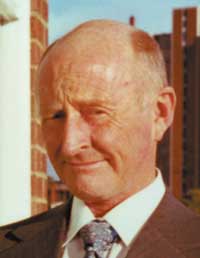 In 1939, Geoff went to work in the Radiology Department, which was “a bit of a shambles”. His knowledge and interest grew as he learned from the visiting Honorary Radiologists, and his technical skills were honed, of necessity, after half of them enlisted in the armed forces in 1939. In 1942, Geoff left for New Guinea and the 9th Australian General Hospital, treating the wounded in tents during the Kokoda Trail retreat.

On discharge in 1946, Geoff joined a private radiology practice in Macquarie Street, Sydney. He was accepted by the Australian and New Zealand Association of Radiologists and became a Foundation Member of the College on its formation in 1949. He worked as an Honorary Radiologist at Sydney Hospital, Crown Street Women’s Hospital and Royal North Shore Hospital.

A shy and gentle man, Geoff was a mentor to other radiologists in the practice, John Cashman, Peter Geddes and Bruce Roberts. He was even-tempered, innovative, honest to a fault, widely read and a thoughtful and well regarded radiologist. He served on two NSW government committees, the Radiological Advisory Committee and the State X-ray Committee.

In 1991, Geoff retired due to macular degeneration, but his mental acuity and memory remained sharp until his last illness.

Geoff was fascinated by astronomy and built a 9-inch reflecting telescope, hand grinding and polishing the mirror himself. He played the flute and built two harpsichords from scratch. He also had an abiding love of the sea and all things nautical, sailing with his friend, Robert Scot Skirving, on “Phalarope” many times.

His wife Claire died in August 2004, after 68 years of marriage. On 17 January 2005, Geoff succumbed to a stroke. They are survived by their four children, Michael, Phoebe, Anne and Lucy, and Geoff’s sister, Pamela Marsh.