Health risk screening in adolescents: room for improvement in a tertiary inpatient setting

Objective: To determine the extent to which comprehensive health screening of adolescents was undertaken in a tertiary inpatient setting.

Results: Weight was recorded for 98 patients, height for 17, pubertal staging for 12, and hepatitis B vaccination status for nine. Documentation of psychosocial screening was absent from 62 charts, inadequate in 29, thorough in three, and complete in seven charts. Adolescent medicine inpatients were more likely than patients in other units to have any screening of psychosocial risk recorded and more likely to be thoroughly screened (P < 0.005). Screening was more often documented for less sensitive issues (eg, home, tobacco) than higher risk behaviours (eg, illicit drug use) (P = 0.013). When screening identified risks, appropriate action was undertaken in most cases.

Conclusions: This study highlights deficiencies in comprehensive health screening in adolescents admitted to a tertiary children’s hospital. These results support the development of more consistent approaches to screening adolescent inpatients. 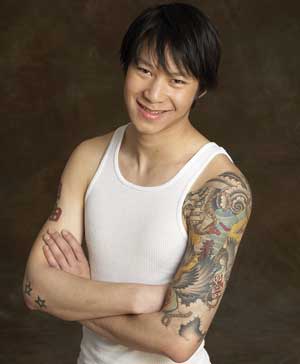 Lifestyles, mental health, and behavioural problems account for a significant proportion of morbidity and mortality in adolescence.1 Identification of health risk behaviours and mental health states is a prerequisite to reducing prevent-able adolescent morbidity and mortality, and the comprehensive health risk screening of adolescents is accepted as an integral element of “best practice”.2

In the United States, national medical and paediatric organisations have developed preventive health guidelines for adolescents.3,4 These guidelines recommend comprehensive biomedical and psychosocial screening to identify concerning behaviours and mental health problems in order to provide health guidance and early intervention. However, their focus has been the primary care setting. Little is known about the role of health risk screening in hospitals.

Adolescents with chronic illness constitute a large proportion of adolescent admissions.5 They experience a complex risk burden, with greater risk of adjustment disorder and mental illness,6 sexual abuse,7 behavioural problems, and poor school achievement.8 Adolescents also present to hospital because of accidents and injuries, self harm, drug and alcohol use, or sexual misadventure. These admissions provide an opportunity for health risk screening and intervention.9

Our aim was to identify the extent to which comprehensive adolescent screening was undertaken by medical staff within the inpatient setting of a tertiary paediatric hospital, focusing on growth and pubertal assessment, immunisation, psychosocial and emotional health and wellbeing.

A checklist was developed for systematic collection of demographic information, including admission time, admitting unit and seniority of admitting doctor. Screening for physical growth, hepatitis B vaccination and psychosocial issues was assessed. Differences were analysed using χ2 statistics.

As this study was an audit, ethics approval was not required.

Documentation of weight, height and pubertal assessment was sought in admission notes and drug charts. Any specific mention of hepatitis B vaccination satisfied our criteria, but the notation “immunisation up-to-date” did not constitute adequate hepatitis B screening.

HEADSS10 (Home, Education and employment, Activities and peers, Drugs, Sexual activity, and Suicide and depression) is the psychosocial history-taking framework taught at The Royal Children’s Hospital. Documentation of each of seven domains was sought (we included tobacco smoking as a separate domain from drugs). Any documentation within a domain was considered sufficient. Psychosocial screening was classified as “None”, “Inadequate” (1–4 domains screened), “Thorough” (5–6 domains screened) or “Complete” (all 7 domains screened).

We recorded whether any risk behaviours, mental health concerns or psychosocial issues were identified. For example, the notation “Attends Year 8 at X Secondary” would be recorded as screened, but not included under “risks identified”, as there was no mention of any issues faced by the adolescent at school. “Attends X Secondary, Year 8, doing well” would qualify as being screened with no identified risks. “Attends X Secondary, Year 8, has missed 7 weeks of school in the last 3 months” would be recorded as screened and a risk identified in terms of period of absence.

If any risk behaviours, mental health concerns or psychosocial issues were identified, we searched for documentation of actions taken or plans made. This could include documentation of discussion with team members, referral to allied health staff, consultation or referral with the mental health service or adolescent medicine unit, or follow-up with the patient’s general practitioner, paediatrician or other community providers. In some cases, we judged that it was appropriate that no action was taken.

For the 100 cases reviewed, 56 were admitted by registrars. Box 1 summarises the screening in the five hospital units.

Hepatitis B vaccination status was recorded for nine patients. Many medical records stated “up-to-date” for vaccination, but without specific mention of hepatitis B.

For 62 subjects, there was no documentation of any psychosocial screening. A further 29 had inadequate screening, and three had thorough screening. Screening was complete for seven patients — all of these had been admitted to the adolescent medicine unit. Fifty-eight adolescents were admitted after-hours, but there was no association between time of admission and screening for psychosocial issues (P = 0.13).

Box 2 documents screening within each of the HEADSS domains, the risks identified from screening, and action taken by type of unit. Screening of issues such as home, education and employment, activities and peers was more common than screening for more sensitive topics such as drug use, sexual activity and depression (P = 0.013). When risks were identified, action was usually taken. Of the 24 separate risks identified, 18 had documentation of action taken.

Although health risk screening is a central element of quality health care for adolescents,2 our study reveals that screening (both biomedical and psychosocial) of adolescent inpatients is deficient. However, when issues were identified from screening, appropriate action was generally taken.

Although weight was recorded in 98 subjects, this may simply reflect routine weighing by nursing staff at admission, rather than formal assessment by medical staff. Height, pubertal staging and hepatitis B vaccination were recorded less frequently. Screening for psychosocial issues in adolescent inpatients was strikingly deficient: only seven young people were fully screened. For both biomedical and psychosocial screening, medical units were more likely than surgical units to screen adolescents, and patients in adolescent medicine units received more thorough and complete screening.

Our results need to be considered in light of the study’s limitations — it was conducted in a single institution and based solely on chart review. Absence of documentation does not necessarily reflect lack of screening.

Known barriers to adolescent health screening include lack of knowledge of adolescents, lack of training, and embarrassment discussing sensitive issues.11 In primary care, lack of time and reimbursement for preventive care are well-recognised barriers.11,12 Within tertiary hospital settings, concerns such as attitudinal barriers may predominate. Tertiary hospitals may be perceived as playing a lesser role in preventive health than primary care settings, and psychosocial issues may be perceived as less important or relevant than acute medical problems.

Screening tools such as GAPS and Bright Futures3,4 have been promulgated in North America as best practice health care, with studies demonstrating improved rates of screening and counselling of risk behaviours following their introduction. Longitudinal results show that such interventions improve adolescent behaviour.14 In Australia, guidelines for risk screening of adolescents and screening instruments have yet to be introduced.14

Structural limitations within the hospital, such as the lack of sufficiently private facilities, contributed to the low rate of pubertal staging. Assessment of pubertal staging can be embarrassing for both the young person and the doctor, and needs to be approached sensitively within a private setting. Attention to developmentally appropriate facilities is important.15

Our study highlights deficiencies in comprehensive health screening of adolescents admitted to a tertiary children’s hospital. We know of no similar studies in Australia. Our results support the development of more consistent approaches to screening adolescent inpatients.

1 Documentation of biomedical and psychosocial screening

2 Documentation of screening, risks identified and actions taken, according to unit