Bevan Coombes, a distinguished pathologist both in New South Wales and Queensland, died in the company of his family at Southport, Qld, on 18 December 2004, from complications associated with limbic encephalitis. 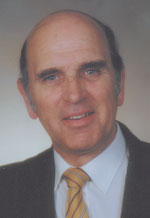 Bevan was born in Sydney on 26 March 1930. He attended Sydney Boys High School and studied medicine at the University of Sydney, graduating in 1955. He did his residency at Sydney Hospital, and in 1962 completed a Diploma in Clinical Pathology. He remained at Sydney Hospital until 1964, by which time he was a Staff Specialist in pathology.

In 1964, Bevan embarked on 18 months of investigative study and practice as a Fellow in Pathology at the Memorial Hospital in New York. He was very proud of being the first Australian doctor to have worked there. He became a Fellow of the College of American Pathologists in 1965 and returned to Australia in the same year, where he resumed his pathology career — juggling work, family life and further studies and trying to find time for his favourite pastimes, golf and tennis.

From 1966 to 1980, Bevan was a Visiting Medical Officer at Hornsby District Hospital and worked in a partnership with four other doctors. During this time, he was made Senior Pathology Examiner for the Royal Australasian College of Radiologists.

In 1980, Bevan moved to Southport, on the Queensland Gold Coast, to take up a position in a small partnership known as Queensland Medical Laboratories (QML). Over the next 22 years, he was influential in the growth and expansion of QML, not only in Queensland but also in New South Wales. He was the main instigator in the formation and operation of the QML practice in country NSW in Tamworth and Armidale. It gave him great pleasure to see the small partnership he had helped grow for over 20 years turn into the largest private medical practice in Australia.

In 2002, Bevan decided that after 50 years in medical practice it was time to retire and enjoy the final years of his life travelling and doing the things that such a frantic, demanding and constant career hadn’t allowed him to do. He had always loved sport, and it was only after having a pacemaker fitted (due to heart problems in the early 1990s) and experiencing increasing problems with his knees that he was forced to give up his beloved tennis and, at a later stage, golf.

Bevan will be deeply missed by his family and all those who knew him. He was a true gentleman, with an infectious energy for life and learning, who, without question, would go out of his way to help anyone who asked him. In the words of one of his closest friends, Dr Ross Hayes, “he was one of the truly intellectually honest people I have ever met”.