1 Area of necrosis on right shin 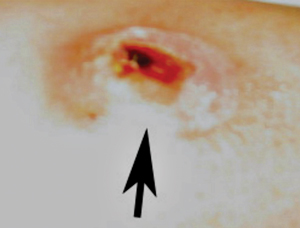 2 Areas of necrosis at graft site 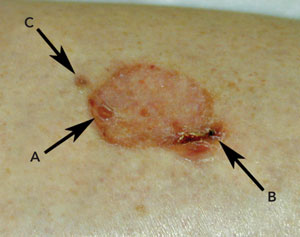 A 50-year-old woman was referred for surgical consultation after accidental self-inoculation with Gudair ovine Johne’s disease (OJD) sheep vaccine 18 days earlier. The automatic vaccination syringe had been hanging from her neck by a plastic delivery tube connected to the vaccine pack when a sheep had bumped the syringe. This resulted in a needle-stick injury to her right shin. Within hours, the area became red, and 3 days later she consulted her general practitioner. Tetanus toxoid was administered, and she commenced a course of dicloxacillin. The inflammation failed to resolve and had progressed to a 2 cm-diameter area of skin necrosis by the time of presentation (Box 1). The necrotic skin and subcutaneous fat were then debrided.

Despite careful wound packing, a tender nodule developed in the overhanging edge of the ulcer. On Day 15 after presentation, soft granulation tissue extending down to the deep fascia and the overhanging skin were debrided.

A week later, a split skin graft was applied. Although the graft was successful when seen about 7 weeks after initial presentation, two red, tender areas had appeared about 5 mm from the edge of the graft.

Within a further 9 days, the inferolateral area had proceeded to necrosis. At the patient’s request, further surgery was delayed until 2 months later (Box 2), when two necrotic areas and associated granulation tissue (arrows A and B) were curetted. No obviously oily material was detected (mineral oil is a component of the vaccine). The uppermost red tender area (arrow C), had settled, but subsequently flared up and discharged a little serous fluid.

All three areas of necrosis had finally healed when the patient was seen 6 weeks later, and there was no evidence of inguinal lymphadenopathy, although the patient reported continuing fatigue and nausea. During the course of treatment of the leg, she developed recurrent urinary tract infections due to Proteus mirabilis.

Histopathological observations on all occasions showed necrosis with adjacent marked oedema and granulation tissue, with polymorphs and occasional acid-fast bacilli (at the time of the first and second operation) but no microcavities suggestive of oil implantation. No stains are available to help differentiate human oil from mineral oil. No pathogens were cultured.

For the past year, the patient has been free of systemic symptoms and her leg remains healed.

Ovine Johne’s disease (OJD) is a chronic wasting disease of sheep caused by the “S” strain of Mycobacterium avium subsp. paratuberculosis. It has spread widely through Australian sheep flocks, causing significant economic loss since it was first detected in New South Wales in 1980. A national vaccination program to control OJD is currently in progress using Gudair vaccine (CZ Veterinaria, Porriño, Spain),1 which is distributed by Pfizer Animal Health. (The Gudair vaccine has been available in Australia since late 1999 for experimental use in about 50 approved flocks. This research work led to registration of the product in April 2002.)

Vaccination of sheep against OJD is now widespread in Australia: over 7 million vaccinations have been performed — primarily in the central and southern tablelands and south-west slopes of New South Wales, across Victoria and on Kangaroo Island (SA), and to a lesser extent in the northern tablelands and western areas of NSW, mainland South Australia, Tasmania and Western Australia. Each 1 mL dose of Gudair contains killed (heat-inactivated) Mycobacterium paratuberculosis organisms and mineral oil, with thiomersal as a preservative. The oil forms a depot at the injection site to act as a potent adjuvant, stimulating a cell-mediated immune response to the mycobacteria.

In humans, accidental injection or exposure of the skin surface or mucous membrane may cause a severe local reaction and, uncommonly, a systemic reaction.

Despite education of vaccinators, there have recently been seven documented cases of accidental self-inoculation in Australia resulting in prolonged morbidity.2,3 Wider use of the vaccine has increased the risk of self-inoculation injuries. There is a need to improve safety for farmers during vaccination and to bring the potential for serious complications of self-inoculation to the attention of doctors in rural areas.

Accidental self-injection may occur because of inadequate animal restraint, poor inoculation technique or carelessness, facilitated by hanging the automatic vaccinating syringe from the neck (Box 3) or shoulder.3

Although self-inoculation in this patient did not appear to penetrate the deep fascia, there was nonetheless severe long-term morbidity. The volume of injected material that is sufficient to cause necrosis is unknown.

It is postulated that the adjuvant mineral oil combined with killed mycobacterial cell-wall components is responsible for provoking the necrotic response.3 This explains why antibiotics do not prevent necrosis and why surgical debridement of the inflammatory vaccine material is the preferred therapeutic approach.

Mycobacterial cell-wall antigens have been traditionally added to oil-emulsion adjuvants (Freund’s complete adjuvant) to enhance the efficacy of experimental vaccines in stimulating cell-mediated immune responses. Such oil-based adjuvants, although generally considered too reactive for routine use in human vaccines, are considered acceptable for use in animals. Research in heavily OJD-infected Australian merino sheep flocks has shown that OJD vaccine injection-site lesions are common, but usually cause minimal untoward sequelae when administered subcutaneously at the recommended site (ie, high on the neck behind the ear).4 Necrosis similar to that seen in human case reports is usually only observed in a small proportion of vaccinated sheep.

The vaccine product label clearly states that users should seek medical attention immediately if accidental self-administration occurs. Further information is contained in a fact sheet provided to farmers that emphasises the importance of avoiding exposure to the vaccine and outlines the procedure to follow if exposure occurs.5 A more detailed fact sheet prepared for medical practitioners, based on reports in the medical and veterinary literature,6,7 outlines a graded medical and surgical approach to intervention after clinical assessment of the patient’s condition.8

Box 4 presents a summary of our recommendations for treatment of accidental self-inoculation with OJD vaccine. These are based on the manufacturer’s recommendations, together with preliminary evidence from the case described here and a series of six similar cases.3

Accidental self-inoculation with Gudair vaccine has major occupational health and safety implications, and it is essential that medical practitioners be aware of the emerging use of oil-based OJD vaccine in the sheep industry and the potential seriousness of accidental self-inoculation. Further information is available from the Poisons Information Centre (tel: 13 11 26) or Pfizer Animal Health Veterinary Services (tel: 1800 814 883). 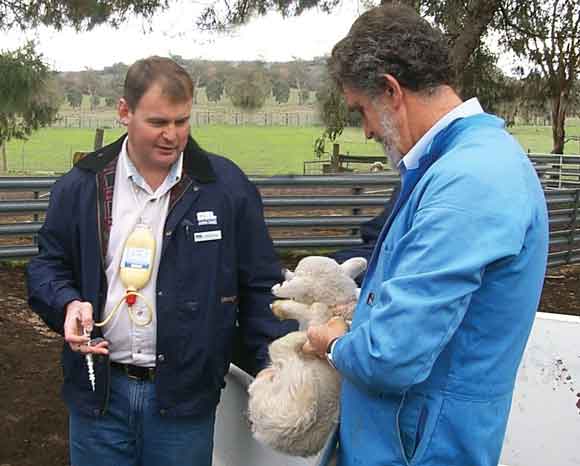