A 20-year old woman presented with a history of frequent epistaxis (from 10 years of age) and bleeding from the tongue (from 8 years of age). She also reported breathlessness on exertion, along with cyanosis and bulbous deformity of the fingers since 4 years of age. There was no history of bleeding from any other site or of a similar illness in the family.

On examination, the patient had cyanosis and clubbing (Box 1), and a lumpy tongue (Box 2) suggestive of tongue telangiectasia. A chest x-ray showed left mid-zone opacity (Box 3), which was confirmed to be a pulmonary arteriovenous malformation (AVM) on spiral computed tomographic angiography (Box 4). Transcutaneous embolotherapy produced a marked improvement in her symptoms. The patient is currently asymptomatic and undergoing regular follow-up.

The patient has hereditary haemorrhagic telangiectasia (Osler–Weber–Rendu disease), an autosomal dominant disorder related to mutations on chromosomes 9 and 12. Clinical diagnosis is based on the findings of epistaxis, telangiectasia, visceral AVMs and family history. Fulfilling three of these criteria indicates a definite diagnosis; two, a possible case. In our patient, the presence of three of the four manifestations confirmed the diagnosis.

Pulmonary AVMs are found in 14%–30% of patients with this disease.1 A family history of the disease may not be present in all cases, owing to de-novo germline mutations. As these occur more frequently in later cell divisions during gametogenesis, siblings are rarely affected. 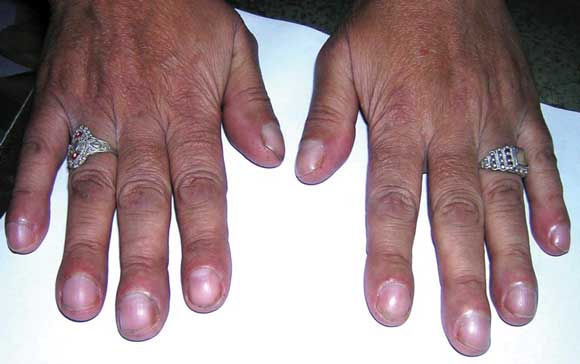 2 Tongue telangiectasia as a manifestation of the disease 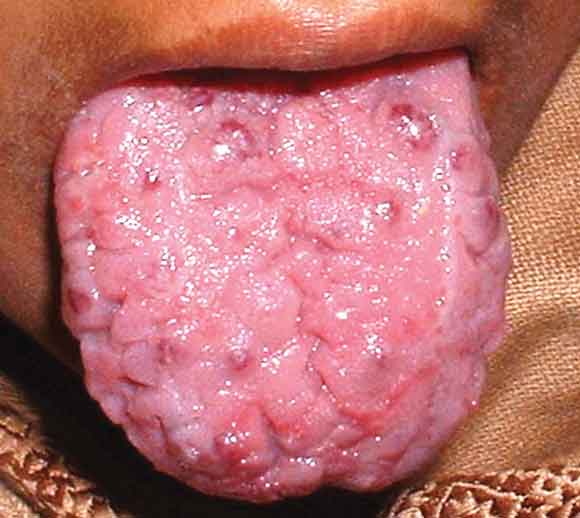 This confirmed the presence of a pulmonary arteriovenous malformation (small arrow) with a large feeding vessel (large arrow).