Is the Australian hospital system adequately prepared for terrorism?

Terrorist attacks involving bombings have made alarming news headlines over the past few years (Box 1), and Australians have been among the hundreds of people killed or injured by bomb blasts. The Australian health care system was exposed to mass casualties on 12 October 2002 as a result of bomb blasts at two popular tourist bars in Bali in which 202 people were killed and 196 injured.2 Another bomb attack in Bali on 1 October 2005 killed 23 and injured 108.10 Interagency communication and cooperation, civilian and military responses, evacuation systems and the in-hospital care of these patients were tested, and all have improved as a result.

However, the response to the Bali bombings is not equivalent to the response that would be required for a major terrorist event occurring on our own soil. Thus, state and federal agencies continue to gather the most up-to-date expert advice to further improve the level of preparedness for casualties resulting from terrorist attacks. Although bomb blasts are a currently preferred method of terrorist attack, our field and hospital systems should also have the capacity to decontam-inate large numbers of people exposed to unconventional types of chemical, biological and radiation injury.11,12

Bomb explosions cause combinations of burns, barotrauma, and penetrating, blunt crush injuries. These injuries, collectively and for the individual, are much more severe than those usually seen in Australian hospitals.13,14 Blast victims (especially those with major burns) consume more resources, in volume and time, than civilian trauma victims.14 Treating children and pregnant women with bomb-blast trauma presents particular challenges.13

Here we discuss some issues related to hospital preparedness for mass casualties after terrorist attacks.

Disasters in urban areas are characterised by many of the injured making their own way to hospital.15,16 A US Centers for Disease Control and Prevention overview of explosions and blast injuries17 warns that, in the event of an urban disaster, half of all casualties will arrive at hospital seeking medical care over a 1-hour period.

Recent terrorist incidents have been characterised by mul-tiple explosions targeting civilians in urban areas. Many of the victims, although sustaining significant soft-tissue trauma, burns and pulmonary injury, have left the scene quickly, making their own way to hospitals. This was the case both in Bali in 2002 (eyewitness accounts reported to M F) and in New York in 2001.1 In the case of large, urban blasts (involving over 60 casualties), victims remaining at the scene for transport have, in some respects, self-triaged themselves as more severely injured. Their arrival at hospital via ambulance follows those patients who have already been able to make their own way there. However, it should be noted that most of the Madrid and London casualties were evacuated by ambulance.7,18,19

There are several clinical indicators for determining which blast victims are likely to need critical care. These include tachypnoea, tachycardia, confusion, multiple penetration wounds and mul-tiple areas of soft-tissue damage.20 Patients with penetrating injury to the head or torso, burns to more than 10% of the body and skull fractures are more likely to have blast lung injuries.21 Tympanic membrane rupture does not always correlate with significant barotrauma, although its absence does not exclude significant trauma.22 Clinical manifestations of pulmonary barotrauma evolve over time. Injured patients may require a minimum of 6 hours’ observation before being considered safe for discharge. This makes it imperative that we build a surge capacity into our major trauma centres.

It is critical that experienced and trained senior medical officers perform the triage of casualties in emergency departments. The flow of received casualties should be unidirectional. Frequent reassessment of the casualties by a senior surgeon enhances the detection of missed injuries and diagnosis of pulmonary blast injury.20 Digital photographs of the victims’ faces should be taken soon after arrival to help in identification, as the face rapidly becomes unrecognisable in many cases. The liberal use of ultrasound can assist in initial surgical triage.23 Computed tomography scans are frequently required, but are a potential cause of bottleneck in moving patients out of the emergency department. Intensive care units, operating theatres and wards need to be cleared sufficiently to make way for the mass casualties. Explosion victims often need interventional angiography treatment. The distribution of mass casualties across multiple hospitals improves access, but we recommend provision of resources for additional surge capacity in the major trauma centres, including a boost in intensive-care-unit bed capacity.

Any large terrorist event in Australia would require a response from both federal and state governments. To ensure that there are adequate resources to cope with terrorism, each state and territory health department has reviewed its disaster plan for the initial management of casualties. Emergency services have concentrated on prehospital response, scene triage and casualty distribution. 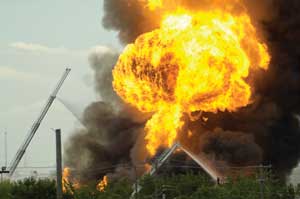 As already noted, in the event of urban disasters, many people travel to hospital unassisted. Initially there is chaos as mass casualties arrive, but the more prepared hospitals and trauma systems are, the more quickly order can be restored and the more lives can be saved. Terrorist bombings that result in mass civilian casualties will seriously challenge even the most experienced and prepared medical centres.20,24 Major hospitals in large urban centres in Australia should plan for large numbers of undifferentiated and potentially contaminated casualties arriving with minimal warning. While no hospital can be fully prepared or resourced for mass casualty events, currently most Australian hospitals would be unlikely to be able to cope with any more than small numbers (10–24) of seriously injured patients.

Some countries enforce regular exercises focusing on mass casualty management.25 The only way to test the system — apart from a real event — is by “table-top” exercises (in which simulated disaster scenarios are played out in a room by senior personnel from various departments) and real-time drills for staff, with moulaged casualties and sometimes “smart” simulated victims.26 In Australia, this already occurs for emergency services in mock disaster exercises, but does not involve many hospitals, either as part of State Disaster Plan exercises or in isolation.

The importance of hospital training drills was highlighted during the response to the 7 July 2005 bomb blasts in London,7 where rehearsal and drills were ingrained. It is further emphasised by the Hadassah University Hospital in Jerusalem (which arguably sees the largest number of terrorist events and victims of any hospital in the world). This hospital takes part in mandatory regular exercises with the Israeli emergency services, and even senior medical students are required to attend a 2-week course on managing casualties after a terrorist attack.27 The Australian health care system should review the model of training conducted in Israel and consider including a mandatory component of disaster management training for all health care workers, medical students and student nurses.

It is vital that there be well developed and accessible standard operating procedures for mass casualty events and disaster response at each hospital (Box 2), and that regional and national trauma systems be put in place. Australian doctors and nurses who would be receiving and treating victims of terrorist attacks must be up to date with their knowledge of the types of injuries and the treatments required after bomb blasts.13 Consideration should also be given to training hospital staff to treat injuries resulting from weapons of mass destruction (such as nuclear, chemical or biological weapons). Australian military medical and nursing personnel who are currently serving with the 332nd Expeditionary Medical Group of the US Air Force in Iraq are obtaining a great deal of experience in managing bomb blast victims and mass casualties. Their knowledge and experience would be invaluable to pass on to Australian health professionals who may be required to treat such victims in Australia.

Hospital administrators should be an integral part of the in-hospital response to a major incident and should also be involved in training exercises, with a clear chain of command and communication established as a priority. An operational room set up for coordinating the in-hospital response and liaison with other hospitals and emergency services is a key component of current external disaster plans. Trained personnel should be assigned to telephones to assist with victim identification and family liaison. Assigning experienced nurses and social workers to coordinate a family/relative centre has been an extremely effective initiative within the Israeli health system.

It is essential that security be enhanced immediately after a mass casualty incident, especially as hospitals themselves may become targets for terrorism. Media management and public information centres need to be set up. Stress management services should be made available for staff, and regular management debriefings should be held after normality is partially restored (usually within 12–18 hours).14,20,28

Beyond the initial crisis, there is a need for long-term planning, as each injured person may take 6 weeks or more to recover and be transferred for rehabilitation. Multiple surgical procedures (especially orthopaedic surgery) are usually required for bomb blast victims. These may proceed over several weeks and have a major impact on the routine activities of a hospital.

Management of the impact of terrorist events on the long-term psychological wellbeing of the community — and, in particular, emergency-services and health-care workers — needs to be rigorously reviewed within the Australian health system. There are lessons to be learnt from countries, such as Israel, that have dealt with this on an ongoing basis. The long-term sequelae of terrorist attacks on victims will place extra burdens on our rehabilitation system. Bomb blast victims who have suffered neurotrauma pose particular challenges as a result of their cognitive, behavioural and physical injuries.29

The importance of adequate preparedness at all levels of our hospital systems cannot be overemphasised. Comprehensive and ongoing disaster training for hospitals is time-consuming and requires federal government oversight with recurrent, targeted funding and national standards. Australian hospitals need to improve their preparedness to deal with mass casualties. Some Internet resources relating to terrorism, mass casualty events and disaster management are listed in Box 3.

2 Preparation of hospitals for terrorism — recommendations

US Centers for Disease Control and Prevention. Information on terrorism and public health, with links to blast injury management and triage.
http://www.bt.cdc.gov

Overview of blast injury, triage and management of mass casualties by E Frykberg, Professor of Surgery at the University of Florida.
http://www.facs.org/education/gs2004/gs35frykberg.pdf

US Centers for Disease Control and Prevention. Article on bioterrorism and mass casualty preparedness in hospitals. (DHHS publication no. [PHS] 2005-1250.)
http://www.cdc.gov/nchs/data/ad/ad364.pdf