Currently, there is an increased awareness of the use of chemical, biological and radiological agents, both in terrorist attacks and in daily industrial accidents. So far, Australia has lagged behind the United States and Israel in preparation for actual terrorist events.

For most hospital staff, chemical incidents present an obscure and even frightening situation.5 Most emergency departments are not prepared for the decontamination of toxic substances, and do not have a decontamination facility, have an inappropriately placed one,6 or have a rudimentary one which would quickly be overwhelmed in the event of mass casualties.4,7

In this article, we show how an emergency department in a tertiary referral centre implemented a CBR response. We also wish to heighten the awareness of CBR response among the medical community.

Various issues were considered as absolute requirements for the implementation of a CBR response. The major considerations were:

Other departments or people consulted were the Infectious Diseases unit, the Nuclear Medicine and Radiation Safety Officers, the Engineering Department, Medical Administration, the Manager for Workplace Health and Safety, and the Emergency Response and Workcover Officer.

The CBR response became an extension of the Hospital External Disaster Plan, with special emphasis on patient decontamination and strict adherence to "contaminated" and "clean" zones.

The emergency department response
Design of the department

An emergency department is a protected area and the prevention of secondary contamination of staff and the department must be guaranteed. With activation of the External Disaster Plan, all entry and exit points should be secured and all movement through the emergency department and hospital must be regulated. Clear labelling of "contaminated" and "clean" areas is needed when a CBR response has been activated.

All patients presenting after a CBR incident require decontamination. In the ambulance bay outside our department, there is a cubicle with one shower head, which would be used in the event of a single or very small number of patients. A further three rows of two shower heads were installed in the ceiling of two of the four ambulance bays. These three lines allow mass casualties, as well as trolleys and equipment, to be decontaminated quickly, efficiently and in an orderly fashion (see Box 1 and Box 2).

For decontamination, all patients are required to shower initially with their clothes on, then remove their clothing, step forward to the next shower head and shower while gently cleansing with soap. They then move forward to dry themselves and put on a clean disposable suit within the "clean" zone. The principle is to move at all times towards the "clean" zone. Staff put the patients' belongings in clean bags, and these and the patients are labelled with identical numbers. The bags of belongings are then placed in the contaminated clothing bin.

All showers have temperature regulation to prevent hypothermia and provide patient comfort.

Having the shower heads in the ceiling of the ambulance bay allows decontamination to be carried out under cover. The ceiling is also fitted with a sprinkler system, which is isolated from the rest of the department and can be used if the showers prove inadequate.

Once patients are decontaminated, they are allowed into the hospital. Depending on their triage category, they will either go into the emergency department or via a clearly demarcated route to the outpatient department. A separate route was established for staff to go to their "base" area for rotation while on duty using their personal protective equipment.

The regulation of movement of ambulances through the area is very important to prevent congestion. Ambulances carrying patients will arrive through a one-way entrance, stop at the drop-off point, and move away in one direction, ensuring smooth traffic flow.

Our emergency department has a ventilation system that is isolated from the rest of the hospital. It also has two negative-pressure rooms, which are used for patients continuing to "offgas". The air in these rooms is replaced six times per minute, and vented directly into the atmosphere. When large numbers of patients are involved, they are treated outside.

In the event of an external disaster, the hospital would go on ambulance bypass and "walk in" patients would be incorporated into the External Disaster Plan.

Ordinary hospital gowns, goggles and latex gloves are inadequate for a CBR response, as they provide only minimal protection.8

Personal protective equipment (PPE), comprising plastic overalls, facemasks with filter, work boots and gloves, was obtained for staff protection (Box 3). No one PPE is adequate to protect staff from all agents.7 The PPE we selected is a non-encapsulating suit, butyl and nitrile gloves with a facemask and filter, and cost $500 a set. The PPEs conform to Australian standards, and protect the respiratory tract, face, eyes, body, hands and feet in a hospital environment where the chemical vapour concentration will not be high.12-11

Disposable coveralls, linen and portable screens were obtained for patient privacy and comfort during the decontamination process.

Plastic bags were obtained for contaminated patient clothing, as well as large containers for their storage. This is very important for forensic purposes and the preservation of evidence.

Plastic sheeting is also required for lining surfaces during a radiological event, and Geiger counters are available to test patients' radiation level after decontamination, before they enter the emergency department. The Radiation Safety Officer will be called in to help with the management of patients in a radiological incident.

Portable personnel barriers were organised for crowd control, which is an important aspect of a disaster response.

Extra medications were obtained for the emergency department and the hospital during periods of potential problems (eg, the World Economic Forum and the Olympics). The medications stockpiled at our hospital included atropine, pralidoxime, ciprofloxacin and doxycycline. This was considered justifiable because of their long half-life, use within the hospital and low cost. Because of the US experience in 1998 showing that large amounts of antibiotics can be taken inappropriately by the "worried well",12 our stockpiles are kept at a secure place and can only be released with authorisation from the Director of Infectious Diseases, Director of Emergency Services or Director of Pharmacy.

The total cost for the PPEs, showers and other equipment was less than $20 000.

The personnel required for the CBR response include medical, nursing, security, clerical, orderlies, patient care assistants and other staff, depending on the type of threat (eg, Radiation Safety Officer, Infectious Diseases Unit).

The actual composition of staff and numbers required need careful planning, as numerous shifts and rotations may be required for a prolonged response. The initial response requires a senior doctor, a senior nurse, a clerk and a security officer to be in the contaminated zone (wearing PPE). Later, more staff members, especially security staff, will be needed in PPEs in the contaminated zone.

There are numerous exclusion criteria as well as monitoring aspects that must be strictly adhered to for use of the PPEs.13 The exclusion criteria include upper respiratory tract infection, vomiting or diarrhoea within the previous 72 hours.13 We estimate that 20% of our staff would be excluded at any time. Subject to ambient temperature, individuals can spend about 30 minutes in the suit; a nurse is delegated to monitor early signs of heat illness (such as malaise, nausea, dizziness and headache) and ensure regular rotation of staff members. It is very important that a register of trained, available staff is organised and an on-call roster established.

Education and training of staff

An extensive education and training program was organised for all staff, with retraining initially after six months and then annually. A comprehensive manual with photos of every step involved in putting on and taking off the PPE was developed. It has been suggested that instruction of the hospital plan be carried out on a yearly basis for hospitals in areas of minimal threat.3

Credit-card-sized cards detailing the External Disaster Plan protocol were distributed to all staff and were attached to their identity badges to facilitate and heighten the awareness of the activation of the disaster plan (see Box 4). Posters of the CBR response protocol were also displayed in appropriate areas.

Practice scenarios were run involving all staff members. These exercises highlighted various logistical aspects of the CBR response that required modification. The only way to acquire such knowledge and experience is to conduct frequent and comprehensive practice drills.4,14

There was close liaison with the Infectious Diseases Unit during planning of the CBR response. A booklet and posters reviewing the common biological agents, their signs and symptoms, infectivity, level of isolation and treatment was produced, and is located in the emergency department.

The provision of a safe workplace is of the utmost importance. Given the nature of a CBR event, a specific planned response as part of the External Disaster Plan should be mandatory in all hospitals. Appropriate PPE should be available in all hospitals, and staff should be able to choose not to participate.

Failure to provide employees with adequate training and protective equipment can result in unnecessary exposures to toxins and violation of occupational health and safety regulations, and result in potential litigation.7,15,16

A surveillance system was implemented to record daily emergency department presentations of various diagnoses, with emphasis on respiratory symptoms, rashes and fever (Box 5). This is reviewed daily by the Director of Emergency Services, the Emergency Physician in Charge of External Disasters, and the Director of Infectious Diseases. Any deviation from the normal daily pattern would be noted and followed up immediately.

It is hoped that similar surveillance systems can be established in all emergency departments in Australia and the data transmitted on a daily basis to a surveillance coordination centre.17

Our recommendations are similar to systems in the US and Israel,3,7,17 but much less intensive, as the threat of a terrorist attack here is perceived to be much lower.

The concept that the emergency department and the hospital is a community asset that requires protection, and no patient is to be allowed within these areas until after decontamination, must be understood.13 Not surprisingly, unprotected staff members may rush to the aid of contaminated patients and become patients themselves — leading to an exacerbation of the problem.19,20 A well-understood response plan and adequate training should avoid this problem.

The belief that patients will arrive at emergency departments already decontaminated also needs to be challenged. Studies have shown that, in the event of a disaster situation, most patients will present to the local hospital by private transport.21,22 Hence, it is very important that all hospitals have an adequate decontamination facility that can quickly and efficiently decontaminate stretcher patients as well as mass casualties.

Hospitals should have a CBR response set out as part of their External Disaster Plan, and should have appropriate PPE. Failure to do so could lead to legal challenges for not providing a safe workplace if a staff member becomes secondarily contaminated. 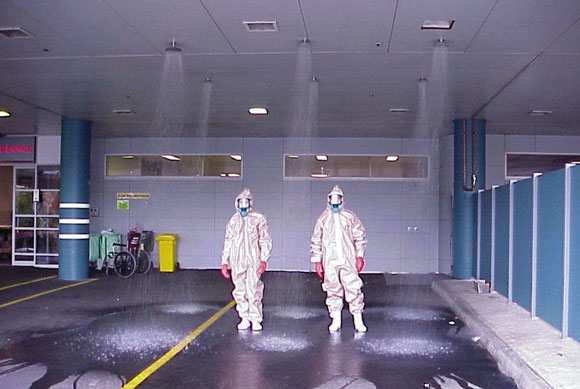 2: Plan of the decontamination area 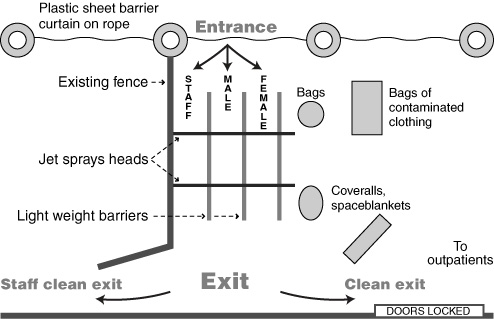 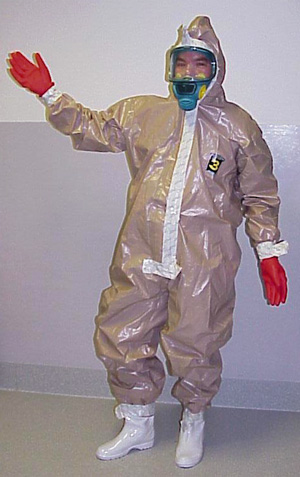 4: Card summarising the External Disaster Plan protocol, distributed to all staff to be attached to identity badges 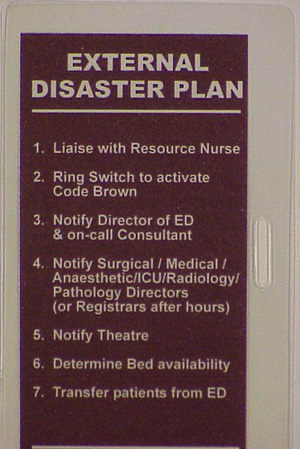