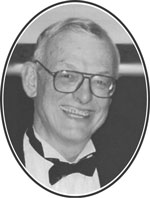 Bruce Gutteridge, a distinguished Queensland pathologist, died in the company of his wife and family at his beach house in Noosa, Queensland, on 12 January 2005, from metastatic colonic cancer. Over 1000 people attended his funeral. His father Noel was one of the three founders of pathology services in Queensland. Bruce and his brother Donald were the fourth generation of medical graduates in the family.

Bruce was born in Toowoomba on 10 September 1928. After graduating in medicine in 1951, he spent several years at Brisbane Hospital, first as a Resident Medical Officer then as a Pathology Registrar. In 1956, he topped the Diploma in Clinical Pathology course at the Postgraduate Medical School (PGMS) in London. He then successively held three prestigious teaching registrar posts at the PGMS — in Chemical Pathology, Haematology and Histopathology.

On returning to Brisbane in 1959, he joined his father in the Gutteridge Laboratories, which had eight staff and branches in Gympie, Nambour and Southport. While Noel expanded into country areas, Bruce directed technical improvements, initially establishing departments of radioisotopes, nuclear medicine and cytology. From 1967, the name “Queensland Medical Laboratory” (QML) was adopted. After his father’s departure in 1974, Bruce was Senior Partner until his retirement in 1994, when QML had over 1500 staff.

Bruce was Visiting Specialist in Histopathology and Haematology at the Royal Brisbane Hospital from 1959 to 1988. He also provided 52 years of continuous service to the Royal Australian Army Medical Corps (RAAMC) (1952–2004). He was Supervisor in Pathology at 2 Military Hospital Yeronga (later 2 Health Service Battalion, Enoggera), Brisbane (1959–2004). In 1969, he spent 4 volunteer months in Vietnam as a Lt. Colonel–Senior Pathologist and resuscitationist, 1 Australian Field Hospital, Vung Tau. He published a number of papers on his work in the United Kingdom, Vietnam and Australia.

Bruce’s hobbies were golf, snow skiing, contract bridge and fishing. For 20 years (1972–1992), as President of the Ski Division, Queensland Branch of the Australian Sports Medicine Federation, he led an annual medical educational and skiing pilgrimage to Smiggin Holes. His favourite saying was, “Life is like an empty bucket — you get out of it what you put into it”. His son Andrew commented that Bruce’s bucket ran at overflow level — his energy and enthusiasm for life, exercise, family, friends and humorous tales was boundless; his generosity legendary. Attacks on his health (including 22 operations in his last 10 years) did not dim his joie de vivre. He was a giant of a man in stature, energy and outlook, and has left his mark — on Australian pathology, on the RAAMC and on society — as a dedicated doctor, patron of the arts, and proud and generous family man and friend.