A 35-year-old pregnant woman (gravida 4, para 3) presented in February 2004 at 35 weeks’ gestation with a 1-day history of vomiting, abdominal pain and drowsiness. She had no significant past medical history, was not taking any prescription medication, and had had an uncomplicated pregnancy up to that time. Her level of consciousness subsequently deteriorated, and she became responsive only to painful stimuli. She had a blood pressure of 190/110 mmHg, abdominal tenderness and generalised oedema.

Abdominal ultrasound excluded acute cholecystitis. A fetal cardiotocograph showed reduced variability in fetal heart rate. Pre-eclampsia was diagnosed, and the woman underwent an urgent caesarean section 3 hours after presentation. The pre-eclampsia was managed with magnesium sulfate infusion, intravenous hydralazine and metoprolol. A 2574 g boy was delivered (Apgar score 3 at 1 minute, 9 at 10 minutes). Initially, he had a blood pH of 7.37 and serum calcium level of 4.12 mmol/L (RR, 2.1–2.6 mmol/L). Within 1 week he had made a full recovery from respiratory distress, jaundice and sepsis. Neonatal hypocalcaemia did not occur.

Subsequently, a computed tomography (CT) scan of the woman’s abdomen confirmed acute pancreatitis, with an oedematous pancreas and fluid in the paracolic gutter (Box 1). Her serum parathyroid hormone (PTH) level on Day 2 was suppressed (0.66 pmol/L; RR, 1.3–6.8 pmol/L), with PTH-related protein undetectable (< 1 pmol/L). On Day 7, her serum 25-hydroxy-vitamin D level was inappropriately high (120 nmol/L; RR, 25–108 nmol/L). (On later questioning, she said she had not taken vitamin D supplements.) The level of 1,25-dihydroxyvitamin D was not measured. The serum level of angiotensin-converting enzyme was normal.

The patient’s hypercalcaemia was managed by intravenous administration of saline, followed by frusemide and pamidronate 90 mg. Over the next few days, her condition improved and her blood pressure and renal function normalised. The hypercalcaemia resolved quickly — to the extent that, by Day 8, she had developed symptomatic hypocalcaemia requiring oral supplementation with calcium carbonate and calcitriol (Box 2).

When her delirium had resolved, she reported a 1-month history of severe heartburn, for which she had self-medicated with antacids, taking up to 10 Rennie tablets a day (an over-the-counter [OTC] preparation containing calcium carbonate 680 mg and magnesium carbonate 80 mg per tablet) (10 tablets contain about 3 g elemental calcium). She had also been drinking up to three glasses of milk a day. In light of this history, milk-alkali syndrome was diagnosed, and the pancreatitis was attributed to hypercalcaemia. By Day 16, the pancreatitis had resolved and the calcium level normalised. She was discharged home without medication and has remained well.

Milk-alkali syndrome — the triad of hypercalcaemia, metabolic alkalosis and renal insufficiency1 — is associated with ingesting large amounts of calcium and absorbable alkali.

Before the advent of modern treatment for peptic ulcer disease (with H2-receptor antagonists, proton-pump inhibitors and antimicrobial therapy), excessive calcium intake related to over-the-counter (OTC) antacid preparations commonly caused hypercalcaemia. In recent years, there has been a resurgence of milk-alkali syndrome. In a series of 100 patients admitted with hypercalcaemia between 1990 and 1993, it was reported as the third most common cause (12%) of hospital admissions for hypercalcaemia after primary hyperparathyroidism and hypercalcaemia of malignancy.2 Reasons for this include the recent emphasis on calcium therapy for osteoporosis, ready availability of OTC calcium preparations, and the use of calcium carbonate rather than aluminium (as a phosphate binder) in patients with advanced chronic kidney disease.

Oral calcium carbonate is now the predominant source of calcium and alkali associated with the development of milk-alkali syndrome (with or without milk intake). The amount of calcium carbonate required to be ingested per day to cause milk-alkali syndrome is reported to vary from as low as 4 g to as high as 60 g.3,4 Thus, there appears to be no direct link between the amount of calcium ingested and development of the syndrome, although reports are few.2 After as little as 1 week of treatment with calcium carbonate, patients can present with symptoms of hypercalcaemia, severe metabolic alkalosis and acute renal failure.5

Three previous cases of milk-alkali syndrome complicating pregnancy have been reported,6-8 one with associated pancreatitis. In our case, the pancreatitis resolved quickly as the calcium level fell. The parathyroid hormone (PTH) concentration was appropriately suppressed in response to the hypercalcaemia. The subsequent hypocalcaemia resulted from cessation of the high calcium ingestion together with suppression of PTH. This was compounded by the concurrent administration of pamidronate and, possibly, by calcium sequestration and fat saponification associated with the pancreatitis.

Although we have attributed the pancreatitis to hypercalcaemia, it should be noted that the causal association between hypercalcaemia and pancreatitis is disputed. In a Mayo Clinic series of 1153 patients with hyperparathyroidism, the incidence of pancreatitis (1.5%) was similar to that in the general population.9 Pregnancy itself has also been independently associated with pancreatitis.10

The diagnosis of milk-alkali syndrome depends on a history of ingestion of excess calcium and absorbable alkali with exclusion of other causes of hypercalcaemia. Only a minority of exposed patients appear to develop the syndrome. Kapsner et al reported that, of 297 cardiac transplant patients receiving large doses of calcium carbonate as prophylaxis for osteoporosis, 65 patients developed hypercalcaemia but only three had milk-alkali syndrome.11 Susceptibility appears to depend upon variables such as pre-existing renal disease and concurrent medications (eg, thiazide diuretics and vitamin D supplements).

Management of the syndrome includes removal of the precipitating (dietary) cause, together with rehydration. In pregnancy, additional complications may involve the fetus (suppression of fetal parathyroid function, neonatal hypocalcaemia and tetany). Our patient had experienced a fairly typical pregnancy, heartburn being a common symptom in pregnant women. An OTC preparation that she took to relieve the heartburn caused life-threatening biochemical derangements, and other pregnant women are potentially susceptible to such a course of events. A diagnosis of milk-alkali syndrome may be missed unless a detailed history is obtained, and information about OTC preparations is essential in all patients presenting with hypercalcaemia. As H2-receptor antagonists and proton-pump inhibitors are not often prescribed in pregnancy for gastro-oesophageal reflux symptoms, many women rely on OTC heartburn relief medication. It is therefore important to educate pregnant patients about OTC calcium carbonate-containing antacids. A limit of 1.2–1.5 g per day of elemental calcium (3.0–3.75 g calcium carbonate) appears safe.2 This equates roughly to six Rennie tablets, five Quick-Eze tablets, 150 mL Mylanta Plus suspension or 230 mL Gaviscon liquid. Interestingly, Gaviscon tablets and all other preparations (liquid or tablets) of Mylanta (except Mylanta Rolltabs) contain no calcium.

Appropriate warning labels on all OTC calcium-containing preparations would help prevent further cases of this type. 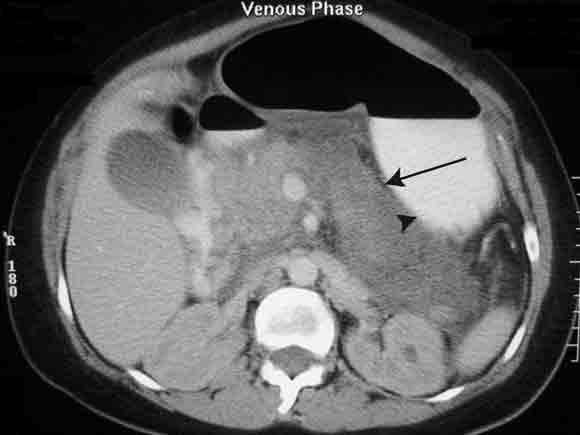 The scan shows an oedematous pancreas (arrow) and fluid in the left paracolic gutter (arrowhead).